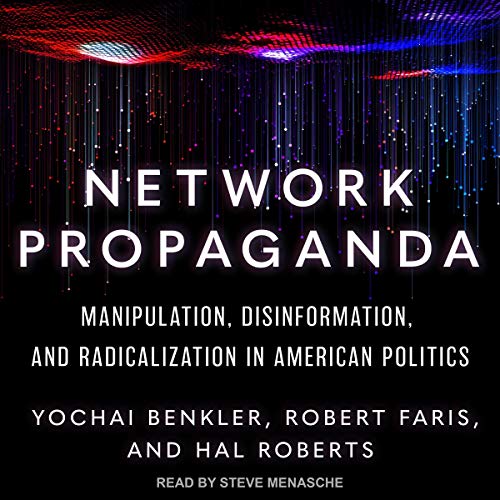 Is social media destroying democracy? Are Russian propaganda or "fake news" entrepreneurs on Facebook undermining our sense of a shared reality? A conventional wisdom has emerged since the election of Donald Trump in 2016 that new technologies and their manipulation by foreign actors played a decisive role in his victory and are responsible for the sense of a "post-truth" moment in which disinformation and propaganda thrives.

Network Propaganda challenges that received wisdom through the most comprehensive study yet published on media coverage of American presidential politics from the start of the election cycle in April 2015 to the one-year anniversary of the Trump presidency. Analyzing millions of news stories together with Twitter and Facebook shares, broadcast television, and YouTube, the book provides a comprehensive overview of the architecture of contemporary American political communications. Through data analysis and detailed qualitative case studies of coverage of immigration, Clinton scandals, and the Trump Russia investigation, the book finds that the right-wing media ecosystem operates fundamentally differently than the rest of the media environment.

The authors argue that longstanding institutional, political, and cultural patterns in American politics interacted with technological change since the 1970s to create a propaganda feedback loop in American conservative media. This dynamic has marginalized center-right media and politicians, radicalized the right wing ecosystem, and rendered it susceptible to propaganda efforts, foreign and domestic. For listeners outside the United States, the book offers a new perspective and methods for diagnosing the sources of, and potential solutions for, the perceived global crisis of democratic politics.

I’m sure the authors have done some rigorous research. That said, their presentation of their findings is so unbelievably biased that it undermined much of what they were saying. Much of what they attribute to the ring wing media is not well acknowledged when mirrored on the left. That said, much of what they present makes sense, especially when taken with Jonathan Haidt’s work. Would have been nice if they had expanded their research to alt media sources in a significant way. There is much to find in the right of center media landscape. They just didn’t know where to look.

Hard to take this book seriously when the authors compare Sean Hannity, Rush Limbaugh, Glenn Beck, Infowars and the Gateway Pundit to the once prestigious CNN, NPR and BBC.

This book is propaganda

This book is not founded in anything other then leftist partisan beliefs. It is another “how we lost in 2016”. If they want to analyze online propaganda they need to do that with both sides and neutrally. I was expecting to learn something by reading this book, but all I heard was leftist bias garbage spewing.