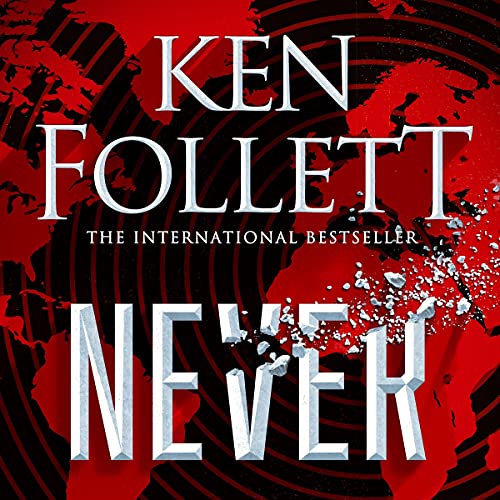 Expertly researched, visionary in scale and the first contemporary novel in more than a decade from international number one best-selling author Ken Follett, Never is more than a thriller. It imagines a scenario we all hope never comes true, one that will keep you transfixed until the final moments....

A stolen US army drone.

A shrinking oasis in the Sahara Desert.

A secret stash of deadly chemicals.

Each is a threat to the stability of the world but individually are problems that can be overcome. In the diplomatic arena, though, everyone will have a different way of dealing with such a threat. And when those in charge disagree and refuse to back down, it will kick off an international chain reaction with potentially catastrophic consequences: a world edging closer to war....

Now three people must work tirelessly and with the utmost skill to stop that from happening:

A spy working undercover with jihadists.

A US president beleaguered by a populist rival for the next election.

The only question is, in a game of brinksmanship can the inevitable ever be stopped?

“A compelling story, and only too realistic.” (Lawrence H. Summers, former US treasury secretary)

"A stunning thriller and one of the most compelling reads of the year." (Daily Express)

What listeners say about Never

I imagine the abridged version would be a better listen. The narrator did a good job but I the storyline suffered a lot of longwinded unnecessary American love life deviations. I didn't mind listening to only one or two chapters a day unlike other Ken Follett novels where I could not stop.

Here’s hoping this NEVER happens. But only time will tell. Great book from start to finish.

Great Listen but Jesus Ken; leaving it there?

I found this a good listen and generally enjoyed it although I found the bit of box ticking tiresome and I suspect Ken might be doing some sort of penance for previous sins of bias.
But Ken, did you really have to leave it there? I suppose you did otherwise how would you end it but going from absolute tension to the end and nothing, wow. There must be a better way. I was hanging out to know how this was all going to work itself out to bang finished.

Sadly this rates as one of the worst books I’ve ever read, I love Ken Follett but this book was disjointed with the stories within the story totally meaningless and didn’t contribute to the bigger plot. Boring and what an absolutely useless end to all three stories.

The narrator was excellent. A well written story, like all Ken Follet' s books. It was very entertaining and it makes you think. Nuclear war will most certainly be the end of earth as we know it. Well done!

I’m looking forward to a sequel read by the same narrator.

Hopefully, this is the beginning of a great, new trilogy. It just can’t end here.

This is by far the best audio book I have heard this year!
A cautionary and realistic story of how the world my be ended just so men in high power can “save face”.
Absolutely brilliant narration - I knew Ms LaVoy was good after listening to other novels read by her, but with this book she has surpassed herself.

Ken Follet at his best

Gripping, a long drive from Cheshire to Cornwall passed easily... now to occupy the return journey.
Most Ken Follet novels deal with history, this is current and possible future, although I do hope not.

As a big fan of Ken Follett I have listened and relistened to The Pillars of the Earth series and The Fall of Giants series, However after 6 hours in on this book I have decided to return it.
It is long and heavy on unnecessary minutiae, it drags along so slowly that watching paint dry seems exciting.
I’m not sure if he thought that to make it a 24 hr long listen would attract people, but he could cut out 8 hrs of unwanted waffle.
Not sure if it’s the totally uninspired narration or the book- but it’s gone back and I’ll be wary of another one like this .

Could only manage an hour or two. Ken has surrendered his soul to the wokeocracy. He usually writes undemanding yarns with plenty of plot good research and cardboard characters to get it to the end safely enough. Here, its all gone mad. Every single "Goodie" is female, brown, black or gay or preferably 3 of those. The one main baddy is the VP who is white male and "extreme right wing" Do you think he is a stupid or clever? Fat or thin ? Racist or not? Yes you guessed right. I actually though the narration was very good and the plot might have developed well enough, but by 2 hours in I was past laughing and into the swearing at the iphone stage. AVOID THIS DRIVEL.

Ken Follet is one of my favorite authors but OMG this is awful, with dreadful monotone narration, the whole thing feels like a bit of a pc box ticking exercise, Im really sorry to say but it has to be one of the most boring book ever.

Never thought I'd see myself giving Ken Follett anything less than a 5 * rating. Couldn't even make chapter 5, this is a book for women, I'm a man, I found it cringe worthy. Sorry

Normally I love Follett’s books and I always look forward to a new release. I use the books to enter into a fantasy world. This book was too depressing.

I usually listen to the books several times. Not this time…

Reads more like a Barbara Cartland romance than a serious thriller on the international stage. Very disappointing.

Not his greatest work I have heard. Try the historical ones for characters you care about. It feels like it tries too hard at times although parts such as the widowed mother are a delight and written as well as ever.

Like Ken Follett books normally, Pillars of the Earth trilogy, brilliant, but this one wasn’t for me.

Edge of your seat

As always Ken Follett has impeccably researched a nightmare scenerio that is all too real. Credit goes to the narrator for a most enjoyable reading - this can make or break an audio book and January did an amazing job.

5 stars to be scared and depressed?

This story will remain with me forever! Its truly scary and depressing, and definitely not for anyone suffering already with mental health problems, its way too realistic!
That said, its excellently written and performed. I can only hope that Xi Jinping also reads a translated copy. This could happen much too easily! 'audible hope you have enjoyed this performance' ?? Hmmm, 'enjoyed' is definitely NOT the right description of my experience! Educated, maybe, but helpless too.

Great book with strong characters… really enjoyed how it all came together . Ken Follett really knows how to build a story and keep one in suspense

Hopefully not too close to the truth!

Great story line. Lots of “seat of your pants” moments. The underlying love stories were a bit predictable. Fantastic narrator.

What started out to be an interesting story just dragged on and on. If you cut out all the mills and boon blah and got down to the actual story it may have been allot better.
The narrator did a great job very consistent with the characters

I loved this book, I couldn’t turn it off. The narration was excellent, story was easy to follow even though it followed several storylines, and the ending was believable. I’m happy to recommend it to anyone interested in a good read.

A well written & researched novel - making it a real life possibility. Told in a way that makes it hard to press pause & get on with daily life.

A novel that puts the small stuff into perspective.

Enjoyed the main plotline. Romance elements were a bit too frequent and cringe worthy at times.

In my view - NEVER is what you'd end up with if a horny corny juvenile hollywood scriptwriter somehow found himself fleshing out a Tom Clancy plotline and turning it into a book - a far too long book.
It's an ok story I suppose - plausible enough - the problem is that the author seems to think it has to have all that dated hollywood spudge smeared all through it - as if laid on with a garden spatula - you know - the stereotypical sultry spy thriller characters interacting in the only way they know how - through sex and violence and through the lens of the author's own tedious nationalism...
A subtle, original and intelligent interpretation of a complex and intriguing international espionage scenario?
no.
For example - I honestly don't think an important, highly placed female agent would go around telling her French African opposite number: "You betcha cute little ass..." even if she was American... and even if he was the hottest hunk in the Sahara...
The story is well read - the narrator is consistent and concise - but damn it's clunky stuff...

Brilliant in the edge of your seat