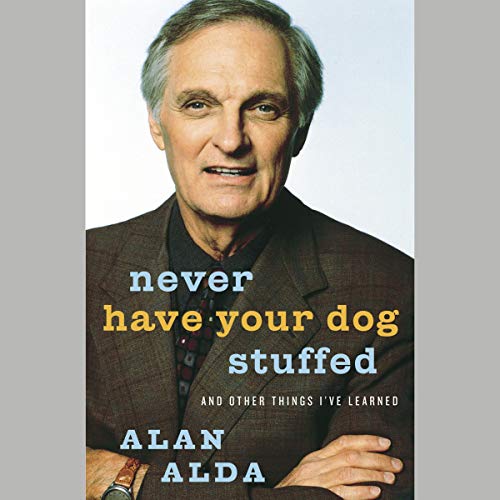 He's one of America's most recognizable and acclaimed actors - a star on Broadway, an Oscar nominee for The Aviator, and the only person to ever win Emmys for acting, writing, and directing, during his 11 years on M*A*S*H. Now Alan Alda has written a memoir as elegant, funny, and affecting as his greatest performances.

Yet Never Have Your Dog Stuffed is not a memoir of show-business ups and downs. It is a moving and funny story of a boy growing into a man who then realizes he has only just begun to grow.

It is the story of turning points in Alda's life, events that would make him what he is, if only he could survive them.

From the moment as a boy when his dead dog is returned from the taxidermist's shop with a hideous expression on his face, and he learns that death can't be undone, to the decades-long effort to find compassion for the mother he lived with but never knew, to his acceptance of his father, both personally and professionally, Alda learns the hard way that change, uncertainty, and transformation are what life is made of, and true happiness is found in embracing them.

Never Have Your Dog Stuffed, filled with curiosity about nature, good humor, and honesty, is the crowning achievement of an actor, author, and director, but surprisingly, it is the story of a life more filled with turbulence and laughter than any Alda has ever played on the stage or screen.

"A brief but entertaining autobiography tempered with humility and a depth rarely found in celebrity memoirs." (Publishers Weekly)

What listeners say about Never Have Your Dog Stuffed

My purchase of this book was a bit of a mistake.

I wasn't reading as carefully as I should have been, before I hit the Audible purchase button. This is the version Not personally read by Alan Alda, so it was a bit of a shock when I started listening to the book last night. It is interesting so far, but it was a disappointment, as I am a very big fan of Mr. Alda's work and love to hear his voice. So, why are there two different narrations? I should have just borrowed the book from the local public library where I could imagine Mr. Alda's voice reading to me.

A revealing and honest memoir

If you are expecting a tantalizing tell all, you will be sorely disapointed. Alda is merciful to his famous friends, mentioning them only to praise them. He is not nearly so kind to himself. He is honest in his portrait of his early life and the mental illness his mother suffered. All of the poignant episodes of this well loved actor's life are handled with grace and the famous Alda humor. I only wish that more time had been spent discussing M*A*S*H, which was perhaps his greatest contribution to popular culture. However all in all, this is a well done and witty memoir.

Made my commute easier to take

I have an hour commute each way to and from work. This was my first audiobook and, for the first time, I couldn't wait to get in my car to commute to/from work. I didn't mind the traffic jams, because it allowed me to listen to this story longer.

I probably would never have bought this in hardcopy book (I tend to be restless and can't sit still long enough to read), but I'm glad I picked this one as my first audiobook. I really enjoyed the story!

Alan Alda has written an interesting memoir about a remarkable childhood. It's hard to imagine a childhood so alien, so removed from mainstream American culture, surrounded by naked women and bawdy vaudeville comics, spent on trains rattling around the country in the middle of the night, from one seedy venue to the next. I really got a feel for the experience listening to this book. What I find really compelling, however, is the self-deprecating humor sprinkled throughout the book. As a Hollywood memoir Alda is refreshingly honest and introspective about his talents, his intellect, and his ego. His frustration and frequent anger towards his mentally ill mother is presented very candidly. And he doesn't take himself too seriously. At times this is laugh out loud hilarious.

I do wish Alda had read the memoir himself, however, because he has such a distinctive writing voice, and his voice itself is so familiar from all those years on television, that it's frankly <em>weird</em> hearing someone else's voice telling his life in the first person. The only way I can describe the reader of this book's voice quality is, if Martin Sheen was really <em>really</em> gay, he'd sound like the guy that read this book. That's not a slur, just an observation. I'm gay myself.

Wish I Had Known

I wish I had read the reviews before purchasing this audiobook. I enjoyed the story very much, but wish I had known there is another version read by Alan Alda himself. Although Marc Cashman is a goood reader, I could here Mr Alda's style in the prose and kept imagining what it would be like to hear him read it. The material needs his unique way of delivering his lines to bring the story to life.

Why didn't Alan Alda narrate it?

I mean really... He would have done a thousand times better job reading his own life. Not to mention adding the reality this book deserves.

The reader of this book tried to imitate Alan Alda's voice, and it was very annoying. I had a hard time getting through the book because of the narration. The book itself was disappointing, as I believe Alan Alda has much more depth than this book portrays.

Alan is a better actor than writer.

This book was OK, but definitely not a must read. The narration (although not Alan) was pretty good. The story itself was a little boring at times though. I'm a big fan of Alan the actor, but I don't care too much for his writing.

Never Have Your Dog Stuffed

GOOD BOOK. Reading about Alfa, his family and especially his parents was fascinating. At times his struggles over his learning to act or direct became a bit tedious. However, overall an enjoyable book.

Alan Alda is one of my all-time favorite actors. This was quite an enjoyable book, filled with interesting stories, fascinating insights, and humor. I only wish the author had narrated the book.

would have been better read by the author

Charming biography, but autobiography as an audio book needs to be read by the author, otherwise it loses something of its authenticity. I missed Alan Alda's distinctive voice on this.

Could have been amazing. Sad shame.

Totally not impressed with the narrator. UGH. Could have been amazing.
I would have given it no stars if i could have. I want a refund!

Really enjoyed the biography of Alda which I found facinating. The book was full of humour and anecdotes but these were ruined by the poor timing and monotonous sounding voice of the narrator. Shame Alda had not chosen to read his own book.

Would you consider the audio edition of Never Have Your Dog Stuffed to be better than the print version?

In my opinion a book comes much more to life in the audio version ..

What was one of the most memorable moments of Never Have Your Dog Stuffed?

I enjoyed the whole book. Never a dull moment.

He is a spendid narrator. Top marks to MC

It was a very touching book. Hearing about his mothers illness and his own insecurity in acting.

What made the experience of listening to Never Have Your Dog Stuffed the most enjoyable?

Whatever I was doing, driving, commuting or with feet up this was really like sitting in a comfortable old armchair, with a nice fine Malt or Cognac and just being taken on a journey in which you could have been there.

Nothing earth-shattering ever happens, no impossible crises, dramas or cliff-hanger-chapter-endings. Instead we role gently through some ups and downs of everyday life - getting close to bad times but then being swept back to good memories.

And so it's a peaceful refuge, happy endings just round the corner and with the energy and amiability of the persona of Alda that you see, whether promoting science or being an alter ego.

So, don't get me wrong, a lot has happened in Alda's life, but as a read, or an audio book, it is a gently rolling soap opera that pleases and delights.

It was over all too soon.

His cadence was just like listening to the author

"And Other Things I've Learned"!