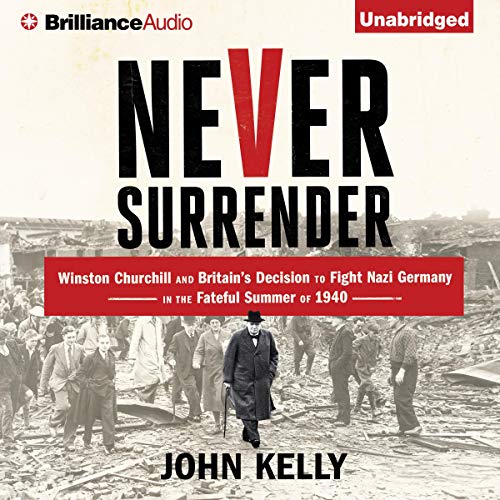 A remarkably vivid account of a key moment in Western history: The critical six months in 1940 when Winston Churchill debated whether the British would fight Hitler.

London in April, 1940, was a place of great fear and conflict. Everyone was on edge; civilization itself seemed imperiled. The Germans are marching. They have taken Poland, France, Holland, Belgium, and Czechoslovakia. They now menace Britain. Should Britain negotiate with Germany? The members of the War Cabinet bicker, yell, lose their control, and are divided. Churchill, leading the faction to fight, and Lord Halifax, cautioning that prudence is the way to survive, attempt to usurp one another by any means possible. Their country is on the line. And, in Never Surrender, we feel we are alongside these complex and imperfect men, determining the fate of the British Empire.

Drawing on the War Cabinet papers, other government documents, private diaries, newspaper accounts, and memoirs, historian John Kelly tells the story of the summer of 1940 - the months of the "Supreme Question" of whether or not the British were to surrender. Impressive in scope and attentive to detail, Kelly takes listeners from the battlefield to Parliament, to the government ministries, to the British high command, to the desperate Anglo-French conference in Paris and London, to the American embassy in London, and to life with the ordinary Britons. He brings to life one of the most heroic moments of the twentieth century and intimately portrays some of its largest players - Churchill, Lord Halifax, FDR, Joe Kennedy, Hitler, Stalin, and others. Never Surrender is a fabulous, grand narrative of a crucial period in World War II history and the men and women who shaped it.

What listeners say about Never Surrender

The book begins in 1919 with Britain’s strong resolve of “never again to go to war”; with three million dead no one wanted to think of war again. Kelly writes a careful and detailed story; Churchill is rarely mentioned in the first one hundred pages of this 384 page book. Once WC appears in the story, he becomes dominate and a colorful figure in the narrations.

Kelly is a narrative historian who is meticulous with a detailed history. Kelly covers not only pre-war attempts to maintain peace but the evolution of how WC eventually came to be Prime Minister and his own Minister of Defense. Kelly covers every twist and turn of infighting and partisan politics in the United Kingdom of the 1920’s and 30’s. I read about this period in Winston Churchill’s own book entitled “The Wilderness Years”. Kelly describes the behind-the-scenes action of the decisions made by Churchill to motivate and lead the British people.

The book is well written and a meticulously researched political history of the pre-World war II period. The book in the words of John F. Kennedy is a "profile in courage" of Winston Churchill. Gordon Greenhill does a good job narrating the book.

Churchill against the appeasers

One of the facts that keeps shining through in all of the books on the European Theater of World War II is how much we have to be thankful to the British in general and Winston Churchill in particular. Anyone who spends any time reading about the start of the war knows that it was Churchill who led the British away from surrender and into what became one of the great victories in the history of warfare. What this book does is guide the readers through the lead up to the start of the war, explain the cross-currents running through British politics at that time and through to what would become their successful resistance to Nazi Germany and their ultimate success, along with their allies.

The author does not make Halifax, the chief proponent of an "honorable" peace, into a villain as it was his duty as he saw it to at least look into the options that were available to a Britain that was essentially defeated, but he does make clear the central role of Winston Churchill in rebuffing the Halifax initiatives and, in doing so, gives a very clear view of what choices were available, who was in favor of resistance and who was not. While I certainly knew the particulars from having read many, many books on the subject, none were as clear and thorough in examining individual motives and explaining all of the choices.

While the book is, in general, excellent there are some nagging mistakes. Two in particular stick in my mind. The author mentions that no foreign army had successfully invaded England in "100 generations". The exact meaning of the term "generation" changes but, at the time of the war it was generally thought of as 20 years. One hundred generations thus means 2000 years and the author seemed to be thinking of Julius Caesar's successful invasion of Britain that long ago. What puzzles me is how he missed William The Conqueror and the invasion of 1066. Fifty generations would have been a more accurate statement.

A second issue is a mistake about the terms offered to the French fleet before the British attacked it at Mers-el-Kabir after the French surrender to Germany. The French Admiral in charge of the French fleet at the time said that had he been offered the choice of sailing to a neutral port, as the author says he was, he would have taken it. All other histories are clear in saying that he was not offered that choice. These are both mistakes that no historian should make as both statements are about history altering events.

Still, the rest of the book is excellent and very well written. In addition the narration by Mr Greenhill is first class and does justice to the book. Overall a book worth reading even if you know of the events in general.

Not a biography, but a blow-blow account as to the reasons Britain fought on.

The author gave just enough historical information stemming from the harsh treatment the victors gave Germany to make sense for the cause of the second Great War. The defeatism of liberals/socialist that caused Britain to be unprepared to defend themselves, let alone Norway, Belgium, and finally, France.

Great history. The war created statesmen and helped sort out the defeatists. Wish the West had statesmen who will defend their citizens, rather than political correctness!