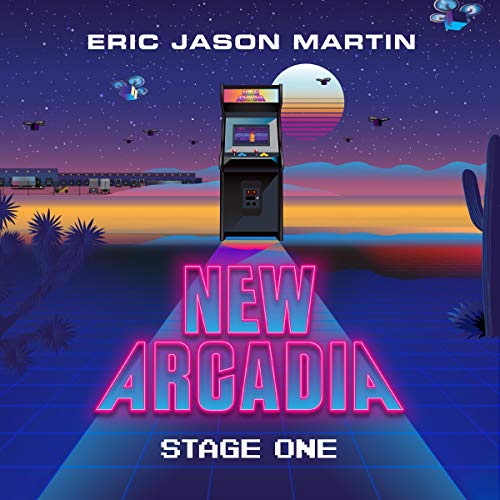 John Chambers is pushing 40. Stuck in his home. Trapped in a dead-end job.

Like the great romantic poet Eddie Money, he wants to go back and do it all over.

On the mean streets of this new retro city, Blaze must use his fists, his wits, and his pager to survive.

Only he can save the city. But he has to team up with a gang of other loners to do it.

Meanwhile, outside the game pods, New Arcadia's creators race to save the real world.

They all have only one more chance to get this right.

If you like Ready Player One and if you were alive in the '90s or know someone who was, then you'll love this adventure.

What listeners say about New Arcadia: Stage One

Seems like a cash-in for Ready Player One and other popular LitRPG books; just okay.

This is a decent LitRPG story (since most that I have listened to aren't that great). Ready Player One is however one of the most creative, unique and all around best novels in this genre, and I'm afraid that comparing New Arcadia to RP1 is just not at all appropriate. To be fair, I grew up in the 80's so RP1 was more for me, and maybe some of the 90's video game references were after my time. I did like the full cast production & the sound effects, and the story was OK and very timely. "Chum" the ubiquitous corporation that runs the world reminded me a bit of the story "The Warehouse" which is definitely worth a read. So, If you go into New Arcadia with that expectation that it will be like RP1 you'll likely be disappointed as I was.

Rough Draft of a decent book

There were a few parts that were ok, but the book was not consistent at all. The main character's special skills and personality changed throughout. The plot went no where, but started in a new direction every couple of chapters. Overall I would call it a knock off of Ready Player One meets a prequel to the matrix, starring a pretty lame guy. Also, way too much covid pandemic talk.

I loved this book! It was so much fun. I have not listened to / read something so inventive and colorful for a long time. It really was just a joy. And clever. So clever! I laughed out loud... Artisanal candles!
Aside from the story - which is great- the production itself is fantastic. The music, the voice talent... this is quite a cast.
Eric Jason Martin is a major talent and if you are not an enemy of fun - you should definitely check this out.

If you like ready player one, litrpg, jumanji, full cast audiobooks, and nostalgia then you will get a fun kick outta this book! Definitely inspired by ready player one. I wouldn’t say it’s as good as that but it’s very entertaining. Check this one out!

Such a fun book.

LitRPG's aren't usually this good. The protagonist and supporting cast of this novel are fully realized characters you will commiserate with.

From a nerd standpoint this book was perfect! It's plot has inspiration from Ready Player One (One of my all-time favorite SciFi books. The cast was perfect and some of my favorite voice actors made this a FULL CAST AUDIO! It's been WAY too long since I heard one of those! The sound effects, the music, even the grunting and acting kept me locked in and focussed the entire novel! I LOVED IT!

Not sure where to start with this one. First, I'm not sure that you can call this book one in a series, I don't feel like there is enough here to constitute a full book. It is mire like part 1 of the start of the series.

Now for the plot. The plot is very derivative of RPO and others in the genre. I did enjoy some of the current events things covered in this book, but ultimately it was just too similar to RPO, but not nearly as good.

My final complaint is with all of the "witty" pop culture references in this book. Every single one felt forced and brought nothing to the story. It was mostly just random naming of movies and directors apropos of nothing.

The cast was top notch and the best part about this book. I will not be back for Stage Two.

Hilarious, fantastic narration, need the next!

There's nothing like excellent voice work to make any story interesting, and this one has that in spades. I binged it over two days, I loved it so much. The story wasn't groundbreaking, a little predictable to be honest- but it was well-paced and I loved the soundscape. I can't wait to revisit New Arcadia!

Such a fun listen!

I'm not a gamer but I really enjoyed this multi-cast production. It flew by and I listened in 2 days.

I enjoyed this book more than i thought i would when it started. I gave it 5 stars because i was disappointed when it ended. It's also very relevant to the times in which we live.

Amazing performances, compelling story with fantastic audio effects. The plague narrative is prescient and a little off putting at first, but it actually makes the narrative stronger.
This is a story about humanity and our choices.

Very engaging story paired with excellent performances. The plot is fairly straight forward, emulating the beat-em-ups it paya homage to, but the character performances more than being you along for the ride

it is ok, imagine a Poundland Ready Player One

it is ok, feels very short, does feel a lot like Ready Player One but from a discount shop, follows a lot of the same story elements but not quite as good

I found the "sound effects" highly irritating. it is neither am audiobook nor a play, but something in between which, in my opinion, makes it the worst of both worlds.

Whether it was just this or the story line really was weak, I just couldn't get into it and have up about a quarter the way in.

Radical to the MAX

outstanding performance, sound quality and story.
i can't wait for the second book to come out.

Such a gripping begging to a series

So good, i finished on the day i began. So many fascinating and terrifying ideas introduced in this. It feels like an ode to my youth and yet it deals with some real evocative worries i have when "normality" resumes. Give me more!

Really struggled to be gripped by this one. Not the kind of game-world-story for me.