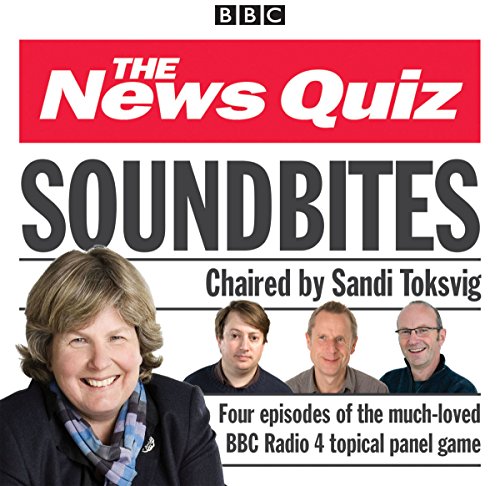 Sandi Toksvig chairs four sparkling episodes of the ever-popular topical comedy show The News Quiz, ‘the finest topical comedy panel game known to radio’, has been providing headlines and punchlines since it first aired in 1977.

In these four episodes, long-standing panellists including Jeremy Hardy, Fred MacAulay, Mark Steel and David Mitchell take a wry look at the news in all its larger-than-life glory.

Also included is a special Sport Relief interlude in which the players answer questions whilst clocking up miles on an exercise bike - with a special guest appearance by Duncan Goodhew!

I'm a fan of the BBC's Comedy News Quiz and was very happy to know that it was available on Audible.

I think anyone who appreciates informative stand-up comedians from the UK will enjoy this compilation.

I only wish there were more episodes available in this "book"; but repeated listenings let me rediscover great jokes & performances.

Even though the subject is current events, I can listen to this over and over again.

Brilliant classic News Quiz format with Sandi Toksvig presenting and Jeremy hardy the ever present regular contestant. Always had me in fits of laughter and didn't realise how lucky we were to have such an excellent combination of such brilliant comedian's who worked so beautifully and well together as well as being excellent in their own merits.

Funniest thing on tv. Sandi should be made Pope. I also like Brian blessed senior