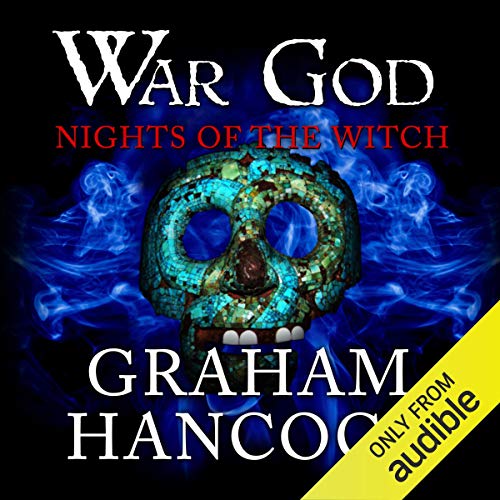 Nights of the Witch

A young girl called Tozi stands at the bottom of a pyramid, waiting to be led to the top where her heart will be cut out....

Pepillo, a Spanish orphan who serves a sadistic Dominican friar, is aboard the Spanish fleet as it sails towards Mexico.... This is the epic story of the clash of two empires, two armies and two gods of war.

Five hundred desperate adventurers are about to pit themselves against the most brutal armies of the ancient Americas, armies hundreds of thousands strong. This is a war of gods and men.

Dark powers that work behind the scenes of history show their hand as the prophecy of the return of Quetzalcoatl is fulfilled with the arrival of Cortes. The Aztec ruler Moctezuma fights to maintain the demands of the war god Huitzilopochtli for human sacrifice. The Spanish Inquisition is planning an even greater blood-letting.

Caught up in the headlong collision between two gods of war are Tozi, Pepillo and the beautiful sex slave Malinal whose hatred of Moctezuma runs so deep she will sell out her own land and people to destroy him.

"[P]art historical fact, part fantasy, the effect is as intense as the events themselves. It's a fascinating read that will have you booking a flight to Mexico long before you finish the book." ( Evening Standard)

The historical fiction is filled with action and adventure. A really great story well performed and well read. makes one want to study again this time in history though the lens of this story-telling.

great read, thanks to Mr Hancock for this entertaining and informative piece. two thumbs up

War God is a great fusion of Hancock's untethered imagination and his exotic experiences in understanding the roots of our "modern" civilization.

This book had me from the start. Really enjoyed the flow of the book bouncing around from story to story. it really painted an interesting pucture of the Spanish Reconquista. and the crazy part is that most of it is true. Obviously excluding the supernatural aspect of the novel.
All in all I loved it, and Im just glad they made an audiobook of this finally!!!

Graham Hancock does a lot of really clever things with this book. I was worried that picking it up the book would hit page three and go straight off the deep end into pseudoscience and aliens, but the combination of supernatural and real history really serves to tell a better story here. Nights of the Witch is an excellent retelling of the Spanish conquest that is focused on drawing you in to the world. The choice to create characters that are not based on historic figures allows this story to explore themes and show a view of the world that normally gets glossed over. So while Hancock does take some major liberties with the events of the conquest they mostly make for a more intriguing story. For instance, in the book Malinalli is a Mayan girl who became a slave of the Aztecs. In reality she was born in the Aztec empire and became a slave of the Mayans, but that wouldn't let you see what being a slave of the Aztecs meant so he flips that relationship. Hancock's portrayal of the world is better than a lot of tv documentaries that I've seen even though this is clearly fiction, and that comes down to his excellent descriptions and his search for the motivations of the people involved. It does have some issues like too many one dimensional characters, and the story does take a little bit to get going as there are a lot of characters that it needs to introduce. Once everyone's plot lines are in action the story does become engaging though. Hancock's understanding of Aztec religion is also a little basic (much better than most people) I just think he could have told a better story otherwise. Fun fact, you actually can't open up a ribcage with an obsidian knife, and if you could that would kill the person before you could rip the heart out. You would have to make a cut below the ribcage and once you do that you could easily reach in and up and rip out the heart with your hand. Still I really enjoyed it.

Yet another great work by Graham Hancock

Firstly, much praise should be given to Mr. Barnaby Edwards for the great read with a full cast made possible by his vocal variety!!! Cheers to a job well done. What else can be said about this book other that it’s is fantastically written and is capable of transporting the listener back in time to the days of Maya and the arrival of the Spanish Conquistadors.

I love this book. Cant wait for the third.

Where does Nights of the Witch rank among all the audiobooks you’ve listened to so far?

I really like this series. My favorite so far.

He has great voices for the Characters.

loved this Book, The narration was great.
An enjoyable read, I was disappointed when it ended, On to the next book in the series

The person who suggested we were in the shire and that a Spaniard should narrate since the z's sound like a speech impediment is apparently not familiar with how Spanish is spoken in Spain. It does sound strange to those of us who are used to how Spanish is pronounced in our hemisphere but it is accurate for Spain so chill out and don't be a jerk.

The narration was excellent. He reads different ages and genders in a way that makes you forget you're being read to. Well done.

I enjoyed the combination of the historical events interwonen with the fictional story and characters.

This book, the first in what is currently a trilogy, is definitely in my top three of 'fictional books that I have ever had the pleasure of listening to' (No mean feat). You may not struggle too hard to guess the other two. Okay so it is not entirely fiction, a lot of it is based on historical fact, but all of the story lines of the people involved are compelling and as the stories evolve the author has allowed us to love and hate almost every character, in fact you may find yourself 'jumping ship' and siding with your original enemy on many occasions before 'jumping back' again and again. Each to his own. In my humble opinion this is a very clever, compelling and absorbing book, as is the rest of the series, written by a very intelligent human being. To add insult to injury the narrator is the perfect man for the job and again is one of the best that I have listened to. All in all the combination of Author and Narrator really does make this the next audiobook you must listen to.

not what I expected but!

Not what I thought it was going
be but I enjoyed it an interesting mix of history and fantasy. I am now going to read the rest of the trilogy

I downloaded this book in error thinking it was sci-fi but it was an unexpected gem that had me so hooked i have bought the next one...couldn't wait for my next credit

This book has kept me engrossed from start to finish. Already got second book ready to roll. If it’s half as good as book 1 war god I’m not moving till it’s done,
I feel like I’m learning history as I listen... definately one of the best books I listened too in three years

great for a first novel.

if you like David Gemmel this is very similar to his work. Interesting combination of both histor and fiction fantasy.

Well quite a divergence for GH but brilliant and compelling story telling.
And the best read Audio book I’ve yet listened to.
Can’t wait to listen to Vols 2&3.

Nights of the witch

Another great book. I couldn't stop listening. This book kept me rivited. I am to looking forward to the next one.

The story in itself is exciting enough, I feel, even without the notions of real Gods and magic. Presentation is good, the development of the characters, kinda predictable. But all and all a entertaining listen.

very clever writing. Hancock opens his mind. It's a weird and wonderful place in there

could not get volume 2 fast enough. written in such a way that even a novice reader can follow .

The final battle was too long in my opinion. lots of good details about Mayan Mexican life revealed