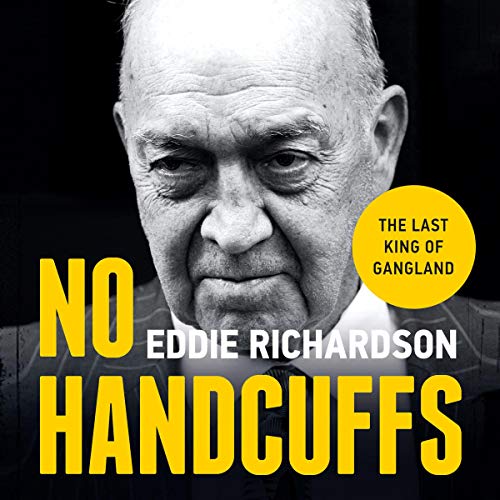 Eddie Richardson is the last brand-name gangster. Say the name and the world of violent criminality grabs you by the throat.

The Richardson brothers, Eddie and Charlie, and their infamous 'Torture Gang', made money while their rivals Ronnie and Reggie Kray made fatal mischief. They fought each other, but now, in 2018, Eddie Richardson says, 'They tell me blood is thicker than water, but with Charlie it wasn't so. He was evil.'

With his brother dead, Eddie Richardson feels free to detail the story of a vicious family feud that provoked extravagant acrimony. No Handcuffs unravels the mysteries of decades of crime and political incident. The story of a turbulent era, it rivals the most imaginative fiction in its portrayal of gangland life with all its chanciness and rawness and careless disregard for any obstacle on the way to its target: the big money.

In an inspired collaboration with best-selling author Douglas Thompson, the mature Eddie Richardson is given a voice to reflect on his journey from the scrapyards of South London to the glitz and glamour of the West End nightclubs, to the flesh and tease of Soho, down Downing Street and through the door of Number 10 to the perils of espionage and international intrigue, and his elevation to demigod status in hard-men territory - and finally as a high-security inmate at Her Majesty's pleasure, but with a personal fridge kept well stocked with gourmet food.

No Handcuffs resonates today for, if anything, greed and corruption are more perverse, more rampant. As Eddie Richardson points out, 'We wrote the handbook for them.'

What listeners say about No Handcuffs

Eddie Richardson is quite a guy, and still as sharp and full of vinegar as a man could ask for. I suppose folks may find plenty to recoil from here, though Eddie is ever-present to smooth the story and offer myriad rationalizations. But to his credit, he is plenty factual too. I have heard many a tale from the denizens of the South and East Ends, especially once they perceived (as their American cousins had) that any shred of organized crime background could be cashed in on in our media-gluttonous world, and pumped up to cartoon proportions. That surely happened with the Kray brothers, and I find a ring of realism to the descriptions here. There is a credibility to the facts laid out here, and to the portraits of people, famous, infamous and obscure. This Eddie Richardson's life was a true roller coaster ride, though he was one of the more astute and careful (that being a VERY relative term: note the many years behind bars in serious lock-downs) among this sort of crowd. Hence his longevity, as we see one after another of his fellows and adversaries misstep and fall by the wayside. Many deeper insights are here, such as the yin and yang of criminal fame (which Eddie likes the upsides of, while bewailing the downsides to no end, perhaps not seeing this symmetry).

The narration is absolutely top drawer. This Karl Jenkinson has matured to read lines with great timing, just beautiful, etched into sharp phrases. His inflection has strong resemblance to two voices I favor: the first is actor Jason Statham, who came into prominence with Guy Ritchie's incredible films of this very sort of folks (I especially like Snatch and Rock N Rolla), which caught my interest in this whole scene and history to start with. Second is very prominent as a reader here at audible, Ralph Lister.

Easy listen from start to finish, seemed like a really nice guy!
Wouldn't take any liberties with him though! :)

Surprised to find out I liked Eddie Richardson

I enjoyed listening to the life story of one of the twentieth centuries most famous gangsters. I thought Eddie Richardson was intelligent and, although not spelled out in this book, would have been a fearsome enemy if you got on the wrong side of him. I discovered he was a man of many talents. I think he has obviously mellowed with age and would be a great dinner guest!

Great life story and full of character and feeling right through to the end
If tyou are into true crime and gangland London, its a great story to make a change from the Krays

Well narrated . You could feel Eddie Richardson's honesty coming through.. This book is a must read for anyone with an interest
in the London crime scene during the sixties

if like me you did not really know much about the Richardson's give this a listen. some fantastic stories in a book with was extremely entertaining.

Absolutely loved it! I was totally engrossed from beginning to end. Very well written and so fascinating to listen to.

Boss story. Easy to listen to. Entertaining, action packed. Honest, brutal, real and sometimes Sad.
Well done Eddie. Hope we can listen to more and gonna check your art work out. Keep up the good work.

Wow i really enjoyed this book was honest and addictive listening.As a south Londoner i could identify with the story names and places which was an added bonus.Was brilliant to hear Eddies side of this story told with integrity and truth.Would highly recommend giving this a listen and feel gutted that it's finished.Very entertaining and great insight into them days.