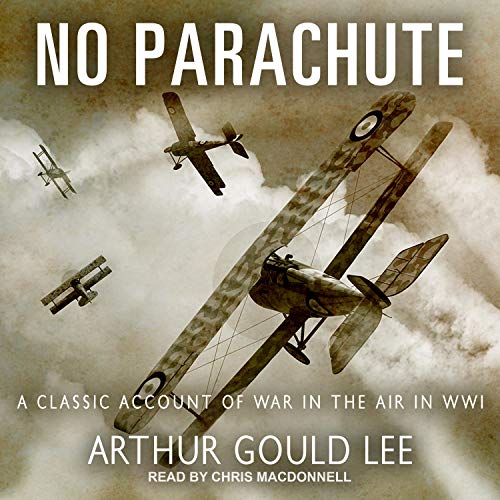 This account of the Great War puts you right in the action - from one of the fighter pilots of the Royal Flying Corps.

From the young airmen who took their frail machines high above the trenches of World War I and fought their foes in single combat, there emerged a renowned company of brilliant aces - among them Ball, Bishop, McCudden, Collishaw, and Mannock - whose legendary feats have echoed down half a century. But behind the elite pilots in the Royal Flying Corps, there were many hundreds of airmen who flew their hazardous daily sorties in outdated planes without ever achieving fame.

Here is the story of one of these unknown flyers - a story based on letters written in the day, telling of a young pilot's progress from fledgling to seasoned fighter. His descriptions of air fighting, sometimes against the Richthofen Circus, of breathless dogfights between Sopwith Pup and Albatros, are among the most vivid and immediate to come out of World War I.

Arthur Gould Lee, who rose to the rank of air vice-marshal and also authored the classic Open Cockpit, brilliantly conveys the immediacy of air war, the thrills and the terror, in this honest and timeless account.

What listeners say about No Parachute

It is amazing how frequently Arthur Gould Lee wrote letter and kept diary entries during his time at the front. In simple direct language used at the time and in much more detail that one would expect for his wife to read. It accounts flying the Sopwith Pup before migrating onto the Sopwith Camel. I thoroughly recommend this book if you enjoy WWI aviation.

An unromantic first hand account of flying for the Royal Flying Corp during 1917 to 1918. Detailed ,descriptive and engrossing.

This is one of the most interesting audio book I have heard in a long time. The manner of the book may seem like a daily diary and letters of a pilot of 46 squadron on the Western Front during 1916-18; but you will appreciate the content with the personal compassion intended by the airman's experiences. The Appendix section is particularly valuable in their retrospection of tactics and the facts behind why the Parachute was denied the brave men who died unnecessarily every day because their was distinct lack of understanding on non-flyers, politicians and armchair experts. The depth of description given is such that you feel you are there and experiencing the fighting, the extreme cold, fear of fire, tensions of combat and the fragility of aircraft ill-conceived by RFC/RNS procurement that were Fokker/Albatross Fodder. Stunning listening, you will not forget this audio book and you will undoubtedly re-listen it many times.

an absolute pleasure to listen to. Great engaging

Taken from the pilots diaries its very well put together and fascinating. often feel like I'm in the pup's cockpit as well. He flew many types and has a lot of fascinating information about the aircraft.
Please listen to the Apendi as these gives an honest account of pre ww1 thinking and the serous.mistakes by senior clueless beaucrats and the truth behind no parachute which I partly understood but now know.

Narration is spot on.

This is one of the best.

A first rate account of the brave RFC pilots who have their all for the war. who could have lived longer if some basic nerds were provided eg parachutes. Lots of information and first hand accounts of arial combat and fallen men.

Fantastic, you felt you were there in the cockpit.

This has got to be the best WW1 book I have read or listened to. I must admit that I struggled initially with the narrator, as he appeared wooden, but that’s probably because he was mainly reading letters the author had written, but I soon got used to him.
I like this book so much that I purchased it for a friend in paper back, and he too is loving it.
It is so descriptive, it’s like your there with the author, it’s simply day to day survival flying in what can only be described as death traps.
They were so brave, and it was unforgivable that the top brass wouldn’t issue them parachutes.
I’ve already downloaded the author’s second book ‘Open Cockpit’
If you have the slightest interest in aviation and WW1, you will love this book.