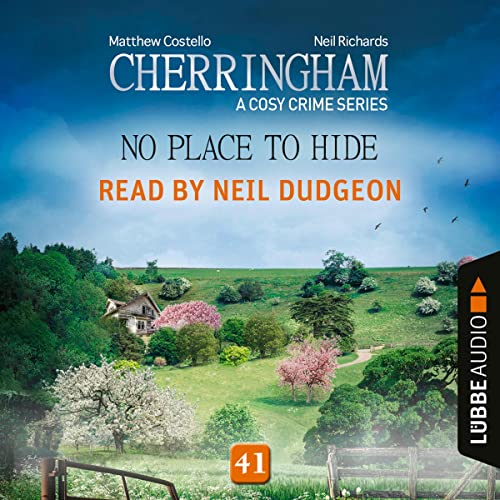 No Place to Hide

When Ed Finnlay - computer programmer and devoted father of two - goes missing, there's not a lot the local police can do. After all, Ed himself told them he would be gone... for quite some time. As the weeks go by with no news, his wife reaches out to Jack and Sarah for help. But they soon learn that there are odd secrets about this missing husband and that he might not only be gone, but also in serious danger. Can Jack and Sarah do what seems impossible... and find Ed Finlay?

Set in the sleepy English village of Cherringham, the detective series brings together an unlikely sleuthing duo: English web designer Sarah and American ex-cop Jack. Thrilling and deadly - but with a spot of tea - it's like Rosamunde Pilcher meets Inspector Barnaby. Each of the self-contained episodes is a quick read for the morning commute, while waiting for the doctor, or when curling up with a hot cuppa.

Co-authors Neil Richards (based in the UK) and Matthew Costello (based in the US), have been writing together since the mid-90s, creating content and working on projects for the BBC, Disney Channel, Sony, ABC, Eidos, and Nintendo to name but a few. Their transatlantic collaboration has underpinned scores of TV drama scripts, computer games, radio shows, and the best-selling mystery series Cherringham. Their latest series project is called Mydworth Mysteries.

The narrator of the audiobook, Neil Dudgeon, has been in many British television programmes including the roles of "DCI John Barnaby" in Midsomer Murders and "Jim Riley" in The Life of Riley. He is also known for his film roles in The Nativity, Sorted and Son of Rambow. In 2012 Dudgeon starred as "Norman Birkett" on BBC Radio 4's Afternoon Play series written by Caroline and David Stafford.

What listeners say about No Place to Hide

I simply love Jack and Sarah! This is the 41st novella about Cherringham and I've enjoyed every one of them. This one was about a disappearing man that Jack and Sarah said they'd find for his wife.

No romance and no swearing at all.

As for the narration: Neil Dudgeon is a good narrator but he does need to stop making Sarah sound like a man.

Felt a shift in this story.

I felt a shift in this Cherringham story. It was the opposite of why I have adored this series. I found this to be a bit lazy and predictable. Because social media apps and technology rule the real world, I like to step inside a story where it doesn't...at least not as much. And I always found all of the male and female characters balanced and strong; equals in strength and determination. At least a great portion of the time. In this story, I feel that this is where it took a turn for me. The real world wandered into Cherringham a bit too much. The perfect balance was missing for me this time.

Overall, the perfect balance was missing from this one for me.

Always looking forward to the next story.

Jack, an ex New York City detective, and Sarah, a web designer and single mom, team up in the village of Cherringham to solve mysteries of all sorts in these delightful short stories. The narrator, Neil Dudgeon, is excellent at bringing these wonderfully entertaining tales to life as I imagine the authors, Matthew Costello and Neil Richards, intended. And thank goodness Neil Dudgeon doesn’t give Jack an obnoxious John Wayne or Marlon Brando accent! Perfect in every way but one. The stories can’t come soon enough! Well done, gentlemen. Thank you!

I'm a big fan of the whole Cherringham series. Neil Dudgeon narrating makes it even better!

This story kept my interest. I enjoyed it very much. The narration was well done. I would recommend this one to others who enjoy a shorter story now and again.

Like the story and characters are exciting With interesting plot twists. Excellent work on production of digital reading.

Love these short stories. Delightful mysteries like quick puzzles to tickle the mind and yet add a comfort with familiarity with the main characters and their relationships with each other. And as always the narration by Neil Dudgeon is superb!

I love every book in this series! Especially like the narrator’s voice. I hope there is a number 42 coming up very soon!

"No Place To Hide" is a thrilling, listener holding story. The title is a bit contradictory with the story because the "missing man, Ed" had a place to hide. The language of the story is also a mix of American and British phrases, which at times, makes the listener a bit confused as to where the story does take place, until a town or parish or village is mentioned. The narrator, Neil Dudgeon, was a very excellent choice with his easy listening voice and holding the listener's attention with very appropriate intonations and pauses in his reading. Overall, though, a very good suspense story with a happy ending.

This should be a TV show!

I love this book series it is one of my favourites. I love the characters and the world around Cherringham. Neil Dudgeon is fantastic as the narrator. I have listened to all 41 books as of writing this, I hope there are a lot more books to come!

As always, a fantastic book from the Cherringham series. I just wish they were longer.

Love these stories, can't wait for the next one. Neil Dudgeon is really brilliant.

What a Wonderful Series, More Please

I have enjoyed this series so much having now listened to all 41 books.
They are all short and sweet and I love the relationship between Sarah and Jack ............... and do I detect something of a "relationship" slowly burning and unbeknownst to either of them?
Also, I really love Neil Dudgeon's narration. He really has the characters' nuances down to a fine art.
I cannot wait for the next instalment/s, soon please!!!!

I certainly did not enjoy this it’s probably because I’ve listen to so many wonderfully written stories. Still I do like Neil dudgeon he should move on to better stories.