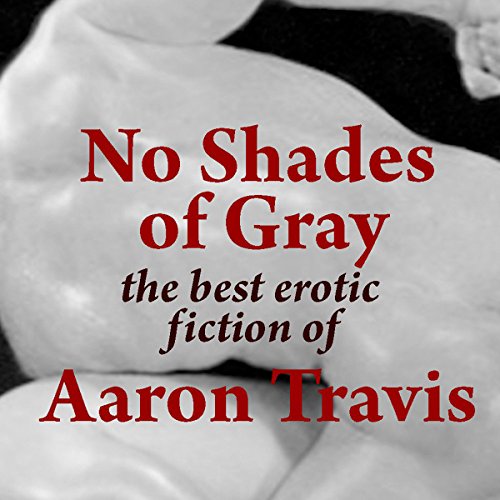 No Shades of Gray

This mammoth omnibus edition collects the very best erotica by the writer the Bay Area Reporter calls "perhaps the best dick-stiffening author in the land" (though Travis also counts many female readers among his legions of fans).

This collection of almost 90,000 words includes the supernatural classic "Blue Light"; "Crown of Thorns", an espionage story with a vicious twist; "The Hit", Travis' super-hot take on gangsters and film noir; "Getting Timchenko", perhaps his most poignant story; "Kudzu", perhaps his most disturbing; and the complete novel Slaves of the Empire, in which the gladiator Magnus defies the will of Rome's most dangerous senator to satisfy his lust with a pair of enslaved barbarian twins.

Aaron Travis is The Master of Gay Erotica

Aaron Travis is my favorite erotica writer of all time.

When I read "The Hit" in Best American Erotica 2003, I never looked at sex stories the same way again. I compare all the erotica I read to Travis.

Travis delivers show-stopping climaxes where the reader is aroused— and often simulataneously in tears.

Fans will be delighted to have all these classics together. For novices, you'll be a "Slave of Aaron" in no time.

What did you love best about No Shades of Gray?

The stories are incredible. Sexy, but better than the sex is Aaron Travis' storytelling ability.

Which character – as performed by Kevin Conner – was your favorite?

Yes! But too much intensity for one sitting.

The stories all have a strong S&M aspect. It's not usually my thing, but I'd still recommend it to anyone gay or straight.