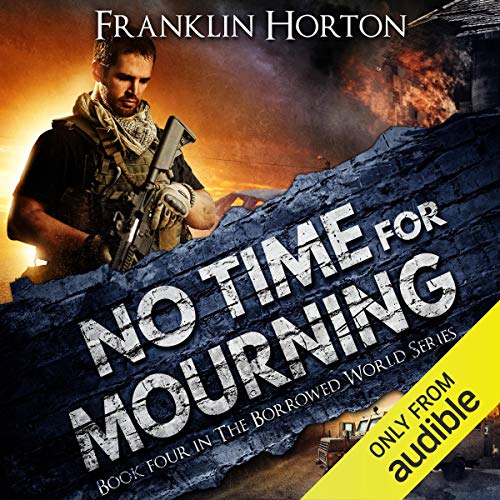 No Time for Mourning

In the Borrowed World Series, America is brought to its knees by coordinated terror attacks against the infrastructure. After spending weeks walking across a violent and horrific landscape to reach his family, Jim Powell hoped they could weather this storm on their secluded Appalachian farm. They had prepared for this. They had armed for this. They could live without power and fuel. What happens, though, when the same qualities that drew Jim to his isolated valley begin to attract another armed group looking for a place to hide from the unrest of a starving nation?

Franklin Horton's Borrowed World Series has been a best seller in the categories of Post-Apocalyptic and Dystopian Science Fiction. He has been interviewed extensively for podcasts and for print media on the topic of preparedness. The series is noted for its realistic portrayal of how average Americans might be affected by societal collapse.

What listeners say about No Time for Mourning

Story is getting long in the tooth

Franklin Horton's first books in a series have never disappointed me and always makes me want more. The first book in the series was great with an interesting plot though set in a typical context. Each successive book seems to have dulled the edge more and more. Still, it's a serviceable SHTF series.

If you haven't yet read the first book and enjoy this genre, go get it. If you've read the books prior to this, you can pass on this without missing anything. Narration was excellent and Kevin Pierce does a terrific job as he has in the previous volumes.

What did you love best about No Time for Mourning?

Holy Moly..his was an exciting one!!! I loved it all...JIm and his group are bad a$$ baby...what a great series this is!!

What other book might you compare No Time for Mourning to and why?

It's a prepper series...and I have listened to a ton of them...but this one is the best out of them all...its accurate..it teaches me stuff...and the characters are really good!!

Randy at the end...she is one brave lady man!!

Just as I suspected, and this always happens in end of the world situations...the people that are trying to survive become your enemy! JIm and his friends are doing there best to survive and protect each other...there is a lot of violence in this book...and our group was in grave danger! I was very proud of Randy, she has really came a long way, she is one tough lady and I can not wait to see where this series goes next!!!

HIGHLY RECOMMEND! LOVED EVERY MINUTE OF IT! WELL WORTH YOUR TIME AND A CREDIT....JUST ONE CLICK IT NOW...AND THANK ME LATER!!!!

Leaves you wanting the next book

There are a lot of great authors out there but Franklin is a cut above. Flows well and leaves you sitting on the edge of your seat.

We like to think that the hearts of men are good, but everything changes in desperate times! Kevin Pierce is great! No problem finishing it in 3 days!

The Borrowed World has been one of my favorites in the post apocalyptic survivor fiction. I am anxiously awaiting Book 5.
I usually buy the audiobook as well so I can listen while I'm doing chores or driving.
Kevin Pierce is an incredible narrator!
His voice really enhances the trading experience

I intend this review to cover the entire Borrowed World series. Point of fact, I could not stop listening to them. I think Franklin Horton's work here is fantastic. Nicely paced, full of action, with well developed antagonists,to say I was pleasantly surprised is an understatement. I appreciate how Mr. Horton stays away from politics and religion (for the large part), and the motivation of the protagonist is universal enough that any reader can slip into his skin. Good job, I look forward to seeing the "Valley Tribe" fares through the winter! Write more, Mr. Horton! Quit your day job and write more!

Would you try another book from Franklin Horton and/or Kevin Pierce?

I think I am done with Franklin Horton. After reading four of his books he still hasn't gotten the pacing and storytelling correct. The timing in his stories are way off and has been since book 1. Kevin Pierce rocked as always. Love listening to him.

Would you ever listen to anything by Franklin Horton again?

No I think I am good at this point. Four books in and he still has the same issues as he started with. I thought he was getting them worked out in book 3 and looking back on it I think it was just because I was getting used to his inconsistencies in storytelling.

None. This book was forced. It didn't add anything to the story. He could have stopped with 3 books.

Sadness. Horton has some great ideas for stories but the mechanics are horrible. If they were better written this story premise would be incredible.

Cannot wait for next book in the series. Great narrator and great lessons and great story

The Continuation Of A Good Story

If you have enjoyed the other books in the series? You'll have a hard time stopping this book!

This book series is absolutely remarkable. Franklin Horton is a genius writer. This book series being the most realistic apocalyptic situation to happen. When anyone asks for a book to read I always recommend this series.

Another fantastic story.. gripping, worried, happy, crying.... knowing the characters now, the story has you running through all the emotions of life and you feel the pain and elation during this chapter. Kevin Pearce is a master of his trade and compliments these books magnificently.

I am totally loving this series. Although I have an post apocalypse crush on Jim!!

An amazing read, I love the characters and the plot twists keep you guessing! I received this book in exchange for my honest review.

i have loved every book in this series, just purchased the 5th book! cant get enough. great story and superb reading

it all both going and then ended a bit quick. typical man! needed to be dragged out a bit. still a good read and as rollercoaster as ever although possibly the mildest one yet.

My cup of tea.

I love the story line of the entire series so far and I am just about to buy book 5, great job Franklin Horton.

The narrator also does a great job of bringing the series to life, thanks Kevin Pierce.