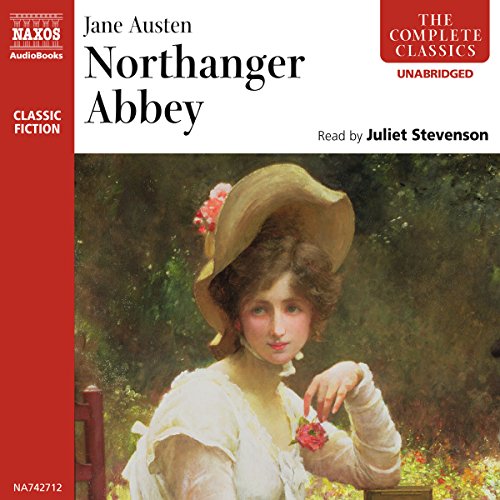 When Catherine Morland, a country clergyman's daughter, is invited to spend a season in Bath with the fashionable high society, little does she imagine the delights and perils that await her. Captivated and disconcerted by what she finds, and introduced to the joys of "Gothic novels" by her new friend, Isabella, Catherine longs for mystery and romance. When she is invited to stay with the beguiling Henry Tilney and his family at Northanger Abbey, she expects mystery and intrigue at every turn. However, the truth turns out to be even stranger than fiction.

I am a manly man. I eat raw meat. I speak in short sentences. but i love this book. It's not just a Jane Austen romance, it's a mini thriller and comedy too. John Thorpe is my idle.

Juliet Stevenson is my favorite reader for Jane Austen novels. She has a pleasing alto voice, and gives a very lively reading. Ms. Stevenson gives all of Jane's characters distinct voices and personalities. I recommend this audiobook highly!

The Charming Dangers of Reading too Many Novels

Northanger Abbey read by Juliet Stevenson was great fun: absorbing, witty, and even, strangely enough (for an anti-Gothic romance), suspenseful. Seventeen-year-old Catherine Morland is an appealing heroine: ex-tomboy, unaccomplished at the things a typical young lady of her era would be accomplished at (playing the piano, drawing, etc.), obsessed with Gothic romance novels, honest, good-natured, sensitive, innocent, and ignorant. Watching her mature through the course of her first experience away from home (first in Bath and finally from about half way through the novel in Northanger Abbey) into a greater awareness of the feelings and true nature of other people and of herself is satisfying.

As some other listeners have said, Northanger Abbey is not up to the level of Jane Austen's best novels, but it humorously plays with the Gothic romance genre that was so popular in the late 18th and early 19th centuries, offers plenty of quotable lines, and, especially as read by Juliet Stevenson, makes a charming and enjoyable audiobook.

Like many other Austen readers, this is my least favorite Austen novel. It was only on re-reading it as an adult (and after slogging through some of the meodramatic novels Austen satirizes) that I finally got the satire. Narrator Stevenson really enlivens the reading to so that the tone can't be missed or messed. I've listened to two other audio versions of Northanger, and this strikes me as by far the best - satiric but not "over the top" delivery.

Another great Austen novel beautifully read by Juliet Stevenson. She is my favorite narrator.

Juliet Stevenson is a wonderful narrator and does a great job reading what is unfortunately not the best of Jane Austen's books. Although the story is pleasant enough, it isn't up to Pride and Prejudice, or Sense and Sensibility, Emma or Mansfield Park. The story lacks complexity, the characters are merely sketched, and it just doesn't hold your interest like the other Austen works. The narration, however, is terrific.

For heroines in training

This was a fun, light-hearted romp, but not one of Austen's best works. It had her characteristic humor, and I love the way she delivers both approbation and condemnation in such wry, genteel turns of phrase. Austen's world is a Regency fairyland where nothing truly violent or horrific ever happens, which makes Catherine Morland, the 17-year-old heroine of Northanger Abbey all the more endearing. Catherine reads lots of gothic novels, and would like nothing better than to be trapped in a haunted house, discover that the local baronet is hiding his mad wife in an attic, find a mysterious orphan on her doorstep, uncover a wicked poisoning plot, etc. Sadly, no such dramatic events occur during her stay in Bath, but she does make friends with the Allens, the Thorpes, and the Tilneys, leading to a typical Austen comedy of manners with misunderstandings, deceptions, attachments, broken engagements, etc.

Catherine is a sweet former tomboy who still has a vivid imagination and a taste for adventure. She grows up over the course of her little adventure, making friends, figuring out that not everyone can be taken at face value, and that she shouldn't try to fit real people into the plots of gothic novels. Also, Austen has a lot of fun name-checking fellow authors, honoring some and making fun of others, and defending the novel as a legitimate work of art.

However, the ending was rushed and had none of the humor or wit of the first part, like Austen had a fun time writing about her overly-imaginative heroine and her adventures for the first part of the book, and then said, "Oh, well, I guess I'd better write the happy ending now." So all misunderstandings are cleared up and Catherine is suitably settled in the last chapter, mostly through a lot of exposition. So, an enjoyable but a lightweight book without the depth of some of Austen's other works.

I am so very glad I reread this! I know I read it sometime in either middle or high school, but other than the part about Northanger Abbey itself (which is actually a little short despite being what the whole novel was named after), I didn't remember the majority of the story at all, so it was practically brand new to me. As always, Austen knew how to write likable and intentionally unlikable characters, and makes the relationship drama compelling, and sometimes even funny. I particularly loved our heroine, Catherine, and her bookish nature, and Mr. Tilney may be my favorite Austen hero yet.

On the technical side of things, I wanted to note how I've found that, as long as I find a good narrator, I enjoy Austen a lot more when I can hear it read aloud. It's not that I don't enjoy it when I read it the normal way, it's just that I don't seem to get as bogged down by the old-style language on audio. I also love when I find a narrator who does different character voices well because it adds that much more life to the story. This narrator was Juliet Stevenson, and she is, by far, the best Austen narrator I've found. I never once got confused as to who was talking, (unlike when I listened to a different narrator for a different Austen book) and she really made it fun. I liked Ms. Stevenson's reading so much, that I fully intend to make sure all the rest of my Austen listening is narrated by her. In fact, I've already checked and it looks like she has indeed narrated all of Austin's books. YAY!

This was a "first" Austen work for me. It was an excellent work to begin with. Wonderfully read and wonderfully written.

I have never "read" a Jane Austin book before, but listening to this one was quite entertaining as well as historically interesting. A light book, full of fun.

There is not really much to say about the content of the book, Jane Austen lovers will enjoy, those new to her, give it a go, she's great! As to the narration, always brilliant from Juliet Stevenson. Enough variation between characters to mark a difference, without creating silly voices. So easy and charming to listen to.

There isn't much to say really - this is just perfect. The reading is, as usual with Juliet Stevenson, quite beautiful. She brings the characters to life, so that we really empathise with Catherine. Those who have read the Mysteries of Udolpho can enjoy Austen's irony. But even with no prior knowledge of the period, of contemporary literature or history you can just sit back and enjoy the story. Bliss.

Having listened to two of Juliet Stevenson's readings of Jane Austen's novels, I instantly downloaded this third one. A beautiful narrative of a touching story.

This is a fabulous book of Jane Austen's and Juliet Stevenson really brings it to life. Her charactisations are perfect - I instantly downloaded more of her readings of Jane Austen!

As always, Juliet Stevenson is a pleasure to listen to and, if this were any other author, I'd have given 5*. However, NA is my least favourite of Austen's works. While I enjoy the knowing tone and parody of the gothic novels of the day, I've never been able to warm to Catherine or feel the love between her and Henry Tilney the way I do with characters in her other books.

Oh! What a glorious rendition of this delightful classic. Juliet Stevenson is so so superb!

I loved reading this once more. Jane Austen's turn of phrase is so delightfully voiced by Juliet Stevenson. What a glory, and I have 'Emma' just bought and ready to read - also with this narrator - What joy of anticipation!


What was one of the most memorable moments of Northanger Abbey?

That would be impossible choose it was all wonderful.

Juliet Stephenson is a legend and make this audio the very best it could be.

The book itself is fantastic. I'd originally read it years ago, and didn't really remember just how good it was. I had this idea that Catherine was a bit silly, but she really isn't. She's very young, so she can be a bit uncertain, but she's got the beginnings of a backbone of steel. The narration was absolutely brilliant. I tried the samples for all the others, and this one was by far the one I liked the most. Stevenson makes the characters feel completely real, and she gets the humour in the narration just right. Perfect version.

Northanger Abbey has a similar theme to Mansfield Park relating to so called friends and their double dealings. The protagonist in Northanger Abbey is a tad too daft for me to sympathise with her endless dilemmas and she will only accept the reality of deceit when it is repeatedly explained to her. If you prefer your Georgian heroines with a bit more brains about them, I suggest Mansfield Park instead.