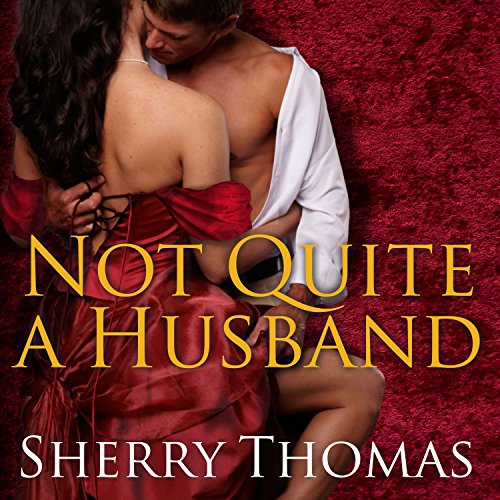 Their marriage lasted only slightly longer than the honeymoon - to no one's surprise, not even Bryony Asquith's. A man as talented, handsome, and sought after by society as Leo Marsden couldn't possibly want to spend his entire life with a woman who rebelled against propriety by becoming a doctor. Why, then, three years after their annulment and half a world away, does he track her down at her clinic in the remotest corner of India?

Leo has no reason to think Bryony could ever forgive him for the way he treated her, but he won't rest until he's delivered an urgent message from her sister - and fulfilled his duty by escorting her safely back to England. But as they risk their lives for each other on the journey home, will the biggest danger be the treacherous war around them - or their rekindling passion?

What listeners say about Not Quite a Husband

I enjoy Sherry Thomas’ stories and was excited to listen to another about the London society people I have come to love. However the narrator’s voice and characterizations were so awful I couldn’t get past the first chapter.

I couldn't go beyond the first chapter as the narrator cannot say the F sound and sometimes the soft TH sound.

narrator is awful couldn't finish. The storyline sounded interesting and I enjoyed this author in the past.

It worked for me

This is the second sherry Thomas book I’ve tried - the first was His at night. To summarize, Leo cheated on bryonie before their wedding. Bryonie sees it happen but does not confront Leo - goes ahead with the wedding. After the wedding though, she cannot forgive him. This results in an awful year of marriage for both people and they eventually have it annulled.
I have to say I found this book more interesting and touching. I know cheating is awful and very hard to forgive so I totally sympathized with bryonie but I did think she was immature in that she didn’t confront Leo before dissolving the marriage. Leo made a huge awful mistake cheating on Leonie before the wedding and I struggle with the fact that he didn’t seem to truly regret his action enough before Leonie confronted him about it. I still liked the book because as much as this is a romance novel, cheating is a real issue and couples do move past it even in real life. No relationship is perfect and Leo’s love for Leonie seemed pretty deep and true in all of his other actions.

Narrator was ok - didn’t bother me as she seems to have bothered other reviewers.

If I could just get past the narrator, I might give this book a chance.

this book is disgusting. It is not sleep sex. It is RAPE. And if you're confused, when someone ask you to stop and you don't. IT IS RAPE. someone having to bar their door to keep you away is not an epic romance or great love. this is the story of a sociopath rapist and the author who honored his behavior by letting him get the girl in the end. Moral of the story: cheat before the wedding and only feel bad if you get caught because... well you're a sociopath; when your wife who knows you're a cheater denies you her vulnerability through sexual intimacy, start raping her in her sleep, and when she ask you to stop, don't, because... well, you're a sociopath; when she finally leaves, feel butt hurt about it and the offended when she tells you that you were dead to her... then basically SHAME her back into your life until she believes you're sorry and wants you again.

I like all the Sherry Thomas books I've read. I'm not a fan of this particular narrator.

Not a light read/listen.

Story is rather dark and the characters face only adversity.
Turns out ok. Thankfully.
Narration is devoid of the correct emotion.

sorry, just can't listen to this narrator. not sure why. it's like the voice overwhelms the story.

This was a sad story. I was annoyed, really hated Bryony. She assumed the worst and was cold and frigid to him without telling him why. She destroyed their marriage