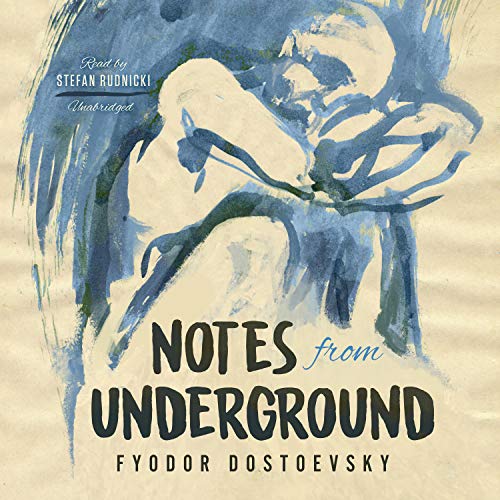 "I am a sick man.... I am a spiteful man", a nameless voice cries out. And so, from underground, emerge the passionate confessions of a suffering man; the painful self-examination of a tormented soul; the bristling scorn of a lonely individual who has become one of the greatest anti-heroes in all literature.

In 1864, just prior to the years in which he wrote his greatest novels - Crime and Punishment, The Idiot, The Possessed, and The Brothers Karamazov - Fyodor Dostoevsky penned the darkly fascinating Notes from Underground. Its nameless hero is a profoundly alienated individual in whose brooding self-analysis there is a search for the true and the good in a world of relative values and few absolutes. Moreover, the novel introduces themes - moral, religious, political, and social - that dominated Dostoevsky’s later works.

Those who are familiar with his works will immediately recognize the novel's richly complex philosophical, political, and psychological themes; those who are not will find the best introduction to Dostoevsky's grander masterpieces.

What listeners say about Notes from Underground

Gem of a writer's hidden treasure of human conscience and two-faced character vivid in a disjointed assembly of notes.

I love Dostoevsky but this book is just amazing in my eyes. The depth of his view into the soul, fear and his idea of life are wonderfully profound. I have no doubt some listeners would despise this book, but if your mind is open, sensitive, it’s a life changing experience

The guy’s voice is not very pleasant

Maybe it’s for effect or maybe he just has a terrible sounding voice but that was the only real detractor. He did a good job though, just a matter of taste really. Great story, good job again Dostoyevsky!

Great book
Excellent narration with character tone differences
Chapters are not divided as in the physical book.

This novella though seeming simplistic at first, is so layered. It will definitely take multiple reading to get through the depths of this Dostoevsky masterpiece. Absolutely Love!

when I started to listen to the book I didn't realize what type of book it was going to be. after maybe 45 mns things started interesting until the end. Fyodor is a very interesting author and pretty dark thinker. I enjoyed this more than I imagined I could have.

Notes from a 19th Century Incel

Underrated piece of undying art by Dostoevsky. Can’t believe this is not as if not more famous than Crime and Punishment. This painstaking tour around the troubled mind of a man unable to understand himself somehow reflects the pain of millions of young men around the world almost 200 years after. How?

Impeccable narration work as well, one of the best I have heard in this app!

It's like listening to a bitter pretentious old man complain about life. A life wasted.

Masterful reading of a masterpiece

I loved everything about this production. The narrator has a riveting voice and emoted beautifully, and the story is riveting. Of course, as it's Dostoevsky, it warrants a second listening, which I gave it immediately following my first time through.

The layout of the book, the quotes and stories all work together to make a dark and thoughtful experience. The reader does a great job as well. I recommend it to anyone

I hate this book

Because the person writing the underground notes reminds me of myself. But it was nice to know I wasn’t alone in this mindset.

this is a book about me, and i suspect you. I've never read anyone that was able to pull so completely my inner workings and articulate them so clearly in all their horrible reality.

This book was very good, and was performed very well. The best praise I can give it is that I never want to read/hear it again. It depicts the mind of a deeply unpleasant man in whom it was far too easy to identify with.

Took me a while to get into. If it wasn't read by SR I would probably not finished it. But I eventually got hooked.

The Great Curse of Consciousness

Male twenty-six-year-old here. Hadn’t picked up a book since I was twenty after finding myself in a headspace not dissimilar from the central character of this book. After my six-year hiatus, which was largely overrun by mindless 9-5 workdays and a deep-rooted despondency, I picked up Crime and Punishment after being referred to Dostoyevsky by a friend. Everything from the captivating prose, to the unbiased assemblage of contemporary philosophies and proclivity for explorative thought, reeled me in to the point of no return. After Crime and Punishment, I read The Brothers Karamazov, which has locked me firmly back into the world of classic literature.

I listened to this next. Finished in one sitting, and by the final passage I was in pieces. I’m not familiar enough with Russian literature or even remotely inclined to academic thought, but it would be shocking to me if this wasn’t viewed as one of the most psychologically profound novellas ever written. The Underground Man might be grappling with ailments. He might be suffering from poor mental health and crippling alienation, but the impression I’m left with is one of lucid reflection. Every one of us can find something to relate to here, but whether we care to admit it or not is another story. Dostoyevsky holds up a mirror to the nihilistic facets of the human mind, helping us understand what perpetuates them so that we may be better. Sadness breeds sadness. Hurt people hurt more people. This book is a caution against human thought, and I’m so grateful it exists. Read it and heed it.

the audio is terrible

the audio is terrible and although I would have liked to listen to it I am disappointed.

Do yourself a favor. Read this book.

This is one of my all time favorite books. This is a ridiculous book about a completely ridiculous man. The spitefullness and tunnel vision of the underground man are his main driving forces for no reason whatsoever. A great explanation of the dark, undesirable parts of the human psyche.
I aproached this book as it was written as a comedy because at times the decisions he makes and the experiences he has because of his decisions are so unnecesary and so absurd that I straight up started laughing at certaing chapters.
The voice actor ia phenomenal. I have no idea how the man looks like but I picture Javier Bardem while in character as Antun Chigurh from No country for old men. Phenomenal voice.

Great story but unfortunately read by an Awful voice

Cant stand this guys voice and he seems to be on everything interesting I listen to - I’ve figured out that if you play him 1.5x his voice is much more palatable

I found this short story engaging, easy to listen to and enjoyable. I laughed out loud many times. Always enjoy Stefan Rudnicki too.

I loved this novella in the same way one loves the rain. It was real, it spoke so much truth, and it encapsulated the torturous beauty of the conscious mind. We are all slaves to our doubts and obsessions. Superior observations on the human condition and chronic social anxiety.

I listened to this while at work, I’m a painter.
I enjoyed the narration and his expressions and voice.

Such an amazing book. You feel the authors should and shame and very honest confessions all the way from beginning to end. Recommend

A rather dark and deeply insightful view into the human condition that still holds true today. A classic masterpiece from Dostoevsky.

the audio was jumbled and confusing

Reader isn’t a good fit. Couldn’t get through the first few sentences, will look for better