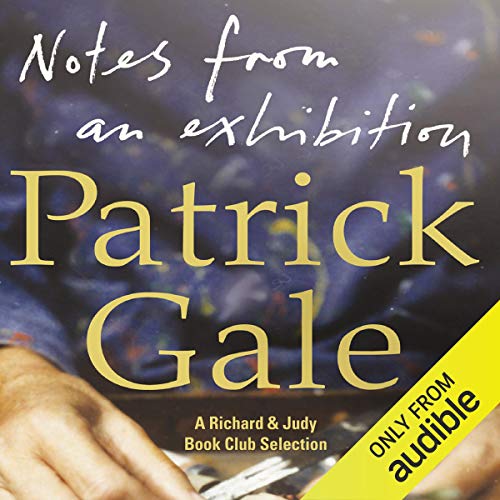 When troubled artist Rachel Kelly dies painting obsessively in her attic studio in Penzance, her saintly husband and adult children are left to unravel a legacy of secrets and emotional damage.

What listeners say about Notes from an Exhibition

I love Patrick Gale’s writing, but I think Steven Pacey’s narration is superior to the author’s own. I shall look out for other books narrated by Pacey. This was wonderful

Another brilliant book from Patrick Gale. All the elements we have come to expect - fantastic characterisation, insightful study of family dynamics, several points of view, twists and turns along the way. The idea of beginning each chapter with a note from an exhibition seems like the kind of thing I wouldn't like, but it was great actually. Well worth a credit.

One of the best audiobooks I have listened to. Just loved it and Steven Pacey's reading made it all the more enjoyable. Highly recommended. Please can we have some more of Patrick Gale's books ready by Steven Pacey. Thank you - just wonderful.

I don't often give books 5 stars, but this one really deserved it. An intriguing and well-constructed plot, believable and interesting characters, fine, subtle writing without any pretentiousness - what more could you want? It was beautifully-read, too. I was really sorry when it came to an end - but hurrah! The ending was satisfying, and not cliched or predictable.

Where to start? Structure? Pace? Authenticity? Breadth of vision? Using the structure of a catalogue to a retrospective art exhibition the author conducts us through the life of a woman obsessed with visual images and the consequent effect on her family. The narrative is conducted at an even pace allowing each character time for reflective internal dialogue. We get to know them intimately. I find, as on previous readings, that the characters ring true. They are not invented to drive forward the narrative. This is a complex novel handled with authority and written with tenderness.

Catalogue of an Artist

In this novel the life of an artist is slowly unfurled by listing items of her art or belongings as if they were being catalogued for an exhibition - then each chapter gives a snapshot of what was going on in her life at the time the particular exhibit came into being. It allows for a rich and complex character to be discovered not only through her own voice but through the voices of those who loved her. The story unfolds in a non chronological way which allows the reader to build their own impressions and is so effective that I revised and refreshed my version of her constantly as each chapter unfolded. Then when I was finished I went back and listened a second time to get any nuances I may have missed first time round.
A lovely book and well worth a listen.

I bought this book because it is narrated by Stephen Pacey, and because I like 'relationship' books. The idea for the structure is interesting - that each episode is linked to a picture from the posthumous exhibition of Rachel Kelly's work - but in the end it's unsatisfyingly 'clever' and confuses more than it explains, because of the way it jumps around in time. The only real problem with an audio book, especially if you are listening while on the drive home from work, is that you can't flick back to previous chapters to find the thread of a character's story, so just have to press on and hope things will be explained by the end. And that is the main fault with this book. It just stops, and misses out the most important scene in the lives of all the characters. I could see it coming, in tantalising (but self-conscious) snippets, but it would seem the last picture in the exhibition is missing.
Beautifully read by Stephen Pacey but I don't think I'll bother with any more Patrick Gale.

I really wanted to enjoy and get into this book but I struggled. I found my mind wandering a lot and in the vain hope that it would eventually all come together, it just didnt and then just stopped. I didnt understand it at all and I listened over and over to see if I had missed something. I found myself looking for a missing chapter.

Disappointed as like the authors other book both are great until about half way through when they seem to loose all sense of purpose and storyline just drifts on...

Loved everything about this book. Patrick Gale is such a good story-teller; books that you can lose yourself in from start to finish and always that sad feeling when you come to the end.

A beautifully written, enthralling story perfectly performed by Steven Pacey.
One of the best audiobooks yet.

what a wonderfully beautiful book. so insightful and honest. the descriptions are fantastic. I loved all of it.

A Different Sort Of Story .... But So Satisfying

Would you listen to Notes from an Exhibition again? Why?

Occasionally I plan to listen again to an audiobook sometime in the future, but I will listen to this one again much sooner than most. I really enjoyed the story. At first, it seemed a little disjointed in the style of John Le Carre, but this is a human story not a spy story and the various strands all come together very satisfyingly.

What was one of the most memorable moments of Notes from an Exhibition?

I most remember the finish. I didn't want it to finish. It was like a great tasting meal that I wanted to go on and on. And yet I knew I was satisfied. It was full of taste and flavour. When it finished, I was almost shocked and disappointed but then, within minutes, I was savouring and relishing it all, and thinking how good it had been and how well written it was.

What does Steven Pacey bring to the story that you wouldn’t experience if you had only read the book?

The performance was very good. But the story was so good that it has overwhelmed my recall of Pacey's performance. I will pay more attention when I listen again. The performance certainly did not detract from the book. Perhaps the fact that the book was so alive for me suggests how competent Steven Pacey was. I would certainly listen to more of him.

I was moved but not by a single moment. At first I thought the book was going to be very ordinary but the various strands started to emerge and I became more and more enthralled as it progressed. I'm not sure when in the book it happened, but my perception of the main subject changed from seeing her as a selfish not-very-likeable woman to a sort of heroine. I don't quite know how it happened but the author weaves a magical story that stirred my thoughts and emotions.

loved it. I think this might be my fav Payrick Gayle so far and I have read a few.