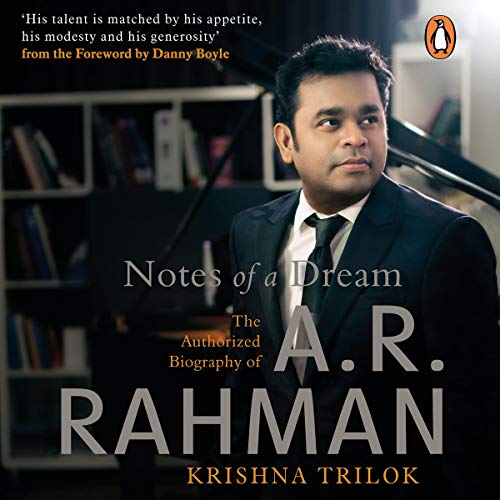 Notes of a Dream: The Authorized Biography of AR Rahman

Who really is A.R. Rahman? We know the music. But do we know the man? For the first time, a nation's pride - winner of National Film awards, Oscars, Grammys and hearts - opens up about his philosophies: hope, perseverance, positivity and love. From his early days as a composer of advertisement jingles to his first big break in feature films, from his keenness to integrate new technology with good old-fashioned music scores to the founding of his music school, from his resounding entry on to the international stage to his directorial debut, from his philanthropy to his inner life, Notes of a Dream captures Rahman's extraordinary success story with all the rhythm and melody, the highs and lows, of a terrific soundtrack by the man himself.

What listeners say about Notes of a Dream: The Authorized Biography of AR Rahman

Loved the book. Why no importance was given to the pronunciation of tamil movies and songs when it has a great importance in the book.

It took me to 'Truly Meditative State'. And the urge to hug ARR once has grown even more.

Except the pronunciation of tamil words n names, it was an absolute awesome narration

It wud have been better to have a Tamilian read it as a there were alot of Tamil words in the book.

It covers many unknown things about ARR. So good narration except misspelling of words in regional languages like Telugu & Tamil. The worst part is unnecessary mentioning of 99songs movie in many parts of the book. It's so much irritating and disturbing the flow.

A PERFECT DELIGHT FOR A R RAHMAN FANS

The quality of this audio book is so nice. One could listen to it at a stretch without any boredom.
The story is inspiring.

Good rendition, except the Tamil pronunciation

The book is fabulous, how can it not be when it's about AR! My biggest and only grouse is the Tamil pronunciation. It was way off the mark at many places. Couldn't someone who knows Tamil have been asked to narrate? For ex, Kadhal (love) is different from Kadal (sea) & the narrator got it wrong almost always. His narration was very good otherwise, but the Tamil was awful.

I was super glad that this book made it in to audible India. I had a listening marathon. Since I grew up listening to AR's music, there were so many things that I could personally connect to. Every time a favorite song is mentioned in this book, it brought me a smile and took me down the memory lane. Even unpopular movies like 'Parasuram' has a mention in this book.

Krishna Trilok has done a fantastic job in compiling all the interviews. I will definitely look forward to his other books.

About the audio performance - While the overall performance of Suyash Mohan for this book can be rated as good, there were some disappointments. His pronunciation of Tamil words were pathetic. I think it is important to get that right as this book has a lot of them. Not just the pronunciation, he also got some words wrong. For example, he says 'Uriye' instead of 'Uyire' (it is a song from the movie Bombay). He also makes an epic fail while mentioning what Rahman says in his Oscar award speech - 'Ella pugalum Iraivanuke'. What Suyash instead says is 'Ella pulagum Iraivanuke', which was hilarious.

An informative, interesting, and inspiring account of the musical legend. A great read. His fans will enjoy learning about his unique life experiences - struggles and triumps.

I am a fan of Rahman but the story has absolutely nothing to offer. It’s bad writing and I couldn’t continue for more than an hour.