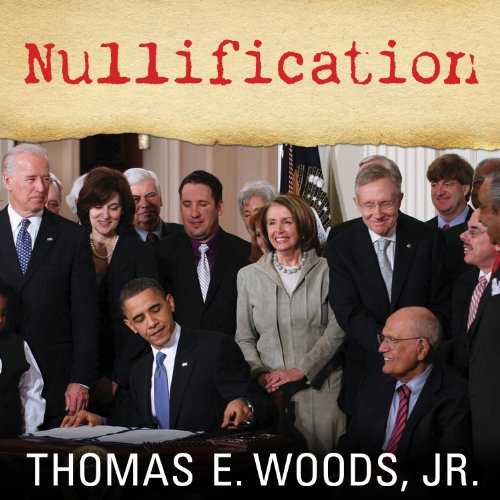 Citizens across the country are fed up with the politicians in Washington telling us how to live our lives and then sticking us with the bill. But what can we do? Actually, we can just say no. As New York Times best-selling author Thomas E. Woods, Jr., explains, "nullification" allows states to reject unconstitutional federal laws. For many tea partiers nationwide, nullification is rapidly becoming the only way to stop an overreaching government drunk on power.

From privacy to immigration to national health care, Woods shows how this growing and popular movement is sweeping across America and empowering states to take action against President Obama's socialist policies and big-government agenda.

Explains Why, but not How To

Montana passes the Firearm Freedoms Act, striking down the Federal government's right to regulate firearms built, sold, and kept within the State. California passes their medical marijuana law and allows a controlled substance to be sold openly, despite Federal laws disallowing it. The list of nullification is longer, and will continue to grow.

If you have heard someone speak about Nullification - or the right of the States to nullify laws coming from the Federal government - have wondered "how can they do that?" and want a serious answer, this is probably the only book out there that will answer you. Note: this book does not discuss Succession, which is often linked with Nullification, but does touch on the subject in the section on whether the American Civil War "resolved all of those questions".

So, what does the book contain: the history of the case for Nullification. That is pretty much it. It does not tell you "how to resist Federal tyranny in the 21st Century", it tells you the legal case that States make. It explains the language of the U.S. Constitution (very well, I think) and related writings of the time. And it goes into great detail of specific State Resolutions that cite nullification. How great a detail? The book came to an end and the narrator started reading the appendices, which are the resolutions themselves, and the audio was only 1/2 done. That's how much detail.

Listen to the sample audio to the narrator's voice. If you like it,you will have an easier time getting through the book. For me, his voice started to induce sleep. (I know, you are probably thinking the subject matter did, but I was interested in the story up until I hit the appendices.)

Overall, I liked the book because I like the narrative story of the history of our country and of its constitution. I downgraded the rating for the narrator's voice and for the extent of the appendices. Word-for-word readings are too "over-the-top" to me. Maybe I am wrong though.

Tom Woods gives a thorough review of the historical precedence of nullification in countering federal laws and initiatives which the states deemed to be overstepping the bounds set forth to limit it in the U.S. Constitution.

Notably, he counters the often used argument that nullification was used by the southern states to promote the continuance of slavery. In actuality, nullification was used most often to counter the federal governments laws which promoted it, as well as laws requiring conscription, and also utilizing states militias as a federal force.

Or listening. Really beneficial in understanding the intent of how the ratifying process of the Constitution was achieved.

An aspect of U.S. history and government every citizen should know but almost none do. The appendiced 5 letter exposition by Judge Able T. Upshire is an especially reasonable and effective argument.

What a shock that government funded schools never mention a word of this in their history or government classes. (yes, I'm being facetious)

What is the remedy the states have to check unconstitutional acts by the federal government?

This is the historical and constitutional defense of nullification. The narrator is a bit bland and emotionless but is hardly the worst narrator I have ever heard. Then material is all verifiable and the points in the book are all quite sound.

Worth reviewing over and over

Tom Woods in nullification has brought us an amazing explanation of our Constitution and individual sovereignty. This is a book that I wish was included in scholastic curriculum across the country. It explains plainly and concisely the rights of the citizenry end of the states against unconstitutional and unwanted federal power grabs. It is worth reading, studying, and rereading more than once.

The Individual States ARE Sovereign!

Mr. Woods must be highly commended for his brave elucidation of what it really means to be a state in the United States. This book is a great book of liberty and Mr. Woods uses primary sources to make the point that the federal government and its branches are usurpers of liberty. Forget what they taught you in school but the Constitution for the socialist are wrong. Read this book and you will be amazed My new slogan regarding this matter is, state interposition, nullification and finally Succession!

Good coverage of an important topic

What did you love best about Nullification?

Dr. Woods does an excellent job of presenting historical context to support his arguments. The book provides extensive coverage of and reference to source material, including letters from the founding fathers, pamphlets, newspapers, and the ratifying conventions. Dr. Woods clearly knows his history and makes ample use of this knowledge when making the case for state nullification.

I didn't, but I could have. In an era of ever increasing federal power, it was refreshing to read a book that reminded me that such centralization of power was neither what the founders of this country intended nor an inevitable deformation of said intent. Whenever I spent time with this book, I emerged feeling empowered to stand up for my rights, and those of others.

I think this book should be required reading for anyone interested in issues of constitutional law or civil liberties. Many of the issue we face as a nation today, including the warentless wiretapping of the Bush administration, the use of torture against detainees, the indefinite detention of said detainees, the soaring federal deficit, the drone program, the NSA's illegal spying, the ever expanding military budget, and ever increasing government regulation of personal and financial life, stem from the ability of the federal government to unilaterally determine the constitutionality of its own actions. State nullification provides a possible means of checking this ever growing centralization of power, and those concerned with such issues owe it to themselves to at least read the book and decide for themselves whether nullification is a viable tool for curtailing the growth of federal power.

Interesting and informative but lacking focus. the whole book is a kind of a mass of side tangents.
Woods did a much better job with his book "Meltdown".