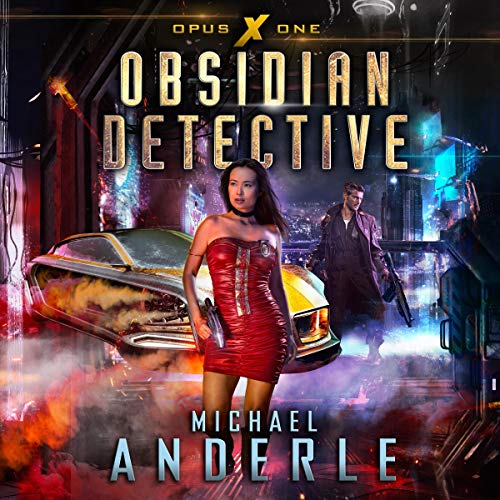 On the fringes of human space, a murder will light a fuse and send two different people colliding together. She lives on earth, where peace among the population is a given. He is on the fringe of society where authority is how much firepower you wield. She is from the powerful, the elite. He is with the military. Both want the truth - but is revealing the truth good for society? Two years ago, a small moon in a far-off system was set to be the location of the first intergalactic war between humans and an alien race. It never happened. However, something was found that many are willing to kill to keep a secret. Now, they have killed the wrong people. How many will need to die to keep the truth hidden? He will have vengeance no matter the cost. She will dig for the truth - no matter how risky it is to reveal.

What listeners say about Obsidian Detective

Like most books that start off by building a new world a little bit slow.

I enjoyed the premise of the book. Very interesting detective story. A little slow until the main protagonist meet each other there was a lot of world building and social commentary, if there is another book hopefully not so much in the next story. It did not seem like a Michael anderley Book until the two main protagonist came together. Then the book started to come together. I will await the next book to see how the story goes

I like the two main characters who work well together despite having different temperaments. they make a good team and I would especially like to see how Gia grows into her role as a detective. I definitely want the rest of the series.

Give it a chance it gets better as you go along.

When I first started listening to this book I was wondering if I was going to like it. The story was just not sounding interesting to me, but then I really got into it and the only thing that bothered me was the way Jia was being performed. Jia's voice sounded way to forced and aggravating. As the book goes on though by the time I got through the book I was hooked and want to know if Eric will ever find out who or what was behind the slaughter of his team. You'll enjoy that Jia and Eric were paired because the Captain thought he could get rid of them both that way. Instead he made a formidable team to be feared. And the AI is an added pleasure.

The whole series was well done from the performance by Greg Tremblay to the actual story written by Michael Anderle , It kept me in suspence and constantly try to guess where the story was going to go. The audible was even beter than the book if that's at all possible. Hats off to Greg and Michael for a job well done.

A fun and exciting series.

I love M.A,'s KG/KU books and his name is what lead me to this series. I purchased the first and quickly did the same for 2-12. I found the characters all interesting, even the evil villainous ones! The male and female MC's are an unexpectedly good pairing. A quirky AI has a intricate role and you can't help but like her. It's certainly packed with fast action shoot'em up's in a good v evil storyline, set in futuristic earth and space. The narrator was GREAT!

The book started strong and you wanted to learn more about the enemy and initial characters. Then it turned into a futuristic police procedural with an annoying partner. Jia was very naive and gung-ho. How awful do you have to be as a partner to have one of them quit shortly before full retirement just to get away from her? There was a lot of repetitive dialogue, mostly from Jia.

I got the book because of the riveting opening and I really enjoy Greg Tremblay's narration.

I definitely enjoyed this story and I really enjoyed Jia, but her naive nature and almost fanatical beliefs were eye-rolling and face palming times. the truly sad part of it is that these types of people really do exist and so makes her even more believable. Now I need to go review book 2 and get book 3.

Unlikable main character, too much rehashing

I couldn't finish it. It felt like the main female character had the same conversation multiple times over the course of portion of the story I was able to get through. She turned me off quickly. There was charter growth during the story but I felt it was plodding and sl okow. I like most of this authors stores, but if this book is any indication, this series is not for me.

Thought I'd try this book because Michael Anderle's generally an easy listen but I just couldn't get into this story. Sending it back so I can try another series by the author.

I quite like this book. I found the main characters believable and had sympathy for their situations. Both the main characters have something to prove and each are driven. I look forward to the next two books in the series, as this looks like a continuing saga of uncovering a rotten core whilst most look the other way. It adds great tension to the story line. Another point of tension is that the main characters come from different perspectives on how to conduct their policing roles. Apart from the early (not first) chapters, the story moves fairly quickly from drama spot to drama spot. It's all good stuff for an exciting read/listen.