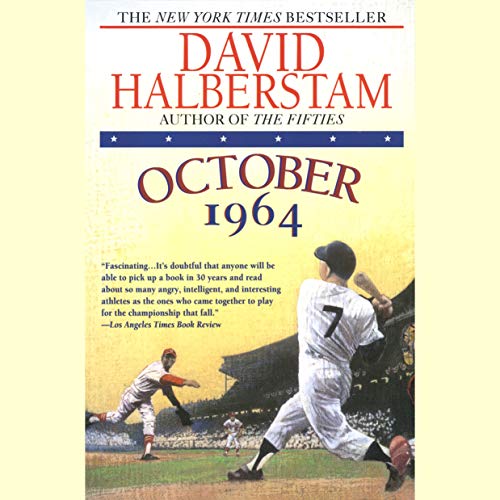 David Halberstam, an avid sports writer with an investigative reporter’s tenacity, superbly details the end of the 15-year reign of the New York Yankees in October 1964. That October found the Yankees going head-to-head with the St. Louis Cardinals for the World Series pennant.

Expertly weaving the narrative threads of both teams’ seasons, Halberstam brings the major personalities on the field - from switch-hitter Mickey Mantle to pitcher Bob Gibson - to life. Using the teams’ subcultures, Halberstam also analyzes the cultural shifts of the '60s. The result is a unique blend of sports writing and cultural history as engrossing as it is insightful.

"Compelling.... 1964 is a chronicle of the end of a great dynasty and of a game, like the country, on the cusp of enormous change." (Newsweek)

"Wonderful.... Memorable.... Halberstam describes the final game of the 1964 series accurately and so dramatically, I almost thought I had forgotten the ending." (The Washington Post Book World)

"October 1964 should be a hit with old-time baseball fans, who'll relish the opportunity to relive that year's to-die-for World Series, when the dynastic but aging New York Yankees squared off against the upstart St. Louis Cardinals. It should be a hit with younger students of the game, who'll eat up the vivid portrayals of legends like Mickey Mantle and Roger Maris of the Yankees and Bob Gibson and Lou Brock of the Cardinals. Most of all, however, David Halberstam's new book should be a hit with anyone interested in understanding the important interplay between sports and society." (The Boston Globe)

"Halberstam's latest gives us the feeling of actually being there - in another time, in the locker rooms and in the minds of baseball legends. His time and effort researching the book result in a fluency with his topic and a fluidity of writing that make the reading almost effortless.... Absorbing." (San Francisco Chronicle)

"Superb reporting.... Incisive analysis.... You know from the start that Halberstam is going to focus on a large human canvas.... One of the many joys of this book is the humanity with which Halberstam explores the characters as well as the talents of the players, coaches and managers. These are not demigods of summer but flawed, believable human beings who on occasion can rise to peaks of heroism." (Chicago Sun-Times)

What listeners say about October 1964

Loved it! Well, extensively researched book; good narration. I highly recommend this. Great story of baseball & American society influencing each other in the 50s & 60s. The book focuses its primary attention on the Cardinals & Yankees teams (understandably so) and the story jumps around a lot going back and forth from player stories/biographies to covering the '64 season. But aside from that nit-picky critique, don't let that turn you away from enjoying this great baseball book.

For a baseball fan, this is fine book filled with great inside details of the last pennant-winning Yankee team of the Mickey Mantle era, and of the rising Cardinals of Bob Gibson and Lou Brock. For content, it's a 5-star book.

The narration is very disappointing. I don't think the narrator for this book necessarily needs to be a baseball fan, but I am continually perplexed by narrators or producers who clearly haven't done even minimal research to get pronunciations right. This often happens in books with foreign words or expressions. There's an app that will allow you to hear the correct sound, so why not use it?

In this book, I found it distracting and mildly irritating when names of historical figures in baseball are repeatedly mispronounced: Bill Veeck, Solly Hemus, Jerry Lumpe, Mike Cuellar, and several more. Some of those are significant figures, others are not. But I'm guessing Angelo Di Loreto must know a baseball fan, and he could have gotten it all right with a half hour conversation.

I still highly recommend this book for its content. And if Mr. Di Loreto does another baseball book, he should feel free to be in touch.

oct 64 sitting in the right field bleachers watching my yankees play the cards
bottom of the 9th mantle hit a hr 5 rows over my head off of barney schultz !
after the game walking around the warning track on the field......heaven :)

Wonderful ! Halberstram remainse the best story teller of his remarkable generation. . I wish for more from this great author !

Halberstam's great 1995 book is given a terrible reading by Angelo Di Loreto who makes no attempt to learn the proper pronunciation of player names, including Hall of Famer Orlando Cepeda.

A few names were mispronounced. That's easy to do on names unfamiliar to the reader. Enjoyed the back story.

I enjoyed the writing and the narration very much. So glad I got this, will listen to again and again.

Not a Yankee fan, but you don’t need to be. Lots of great stuff especially on topics of race, and I learned a lot about Bob Gibson, which was great. Glad I read this book

Here's an idea: When you are going to produce an audiobook about baseball, hire a narrator who is familiar with pronunciation of the baseball names (e.g., Reuss, Cepeda, Belanger). This book had more mispronunciations than other books. It's too bad because it is a wonderful book by Mr Halberstam. He's a great author who deserves better.

Thoroughly enjoyed it. Im sure I eill listen to it again. Narration was also excellent.