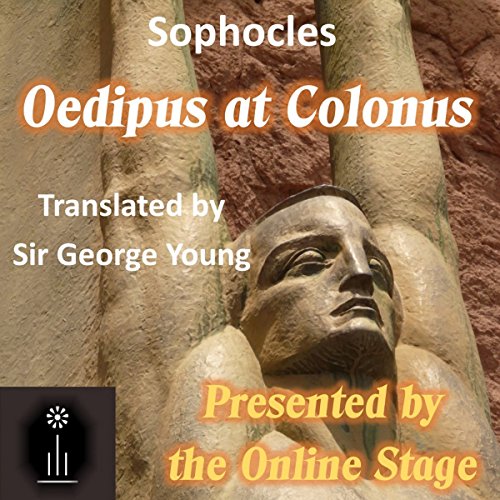 Sophocles (497 BC-406 BC), Aeschylus and Euripides formed a trio of ancient Greek tragedians whose works represent the foundation of the Western tradition of classic drama. Of the more than 100 plays written by Sophocles, seven have survived to the present day. Perhaps the most famous of these are the three which are now known as the Theban plays: Oedipus the King, Oedipus at Colonus, and Antigone.

In Oedipus at Colonus, the banished king, after years of wandering, accompanied by his faithful daughter Antigone, finds himself in Athens. Receiving a warm if guarded welcome from Theseus, King of Athens, he prepares to settle himself to spend his last days in peace. However, unwelcome visitors from his tortured past continue to haunt him until the very end.

Before his passing, Oedipus makes a baleful prediction of the continuing family strife which will be played out in Antigone, the final play in the series.

Denis Daly as Oedipus, formerly King of Thebes; Libby Stephenson as Antigone, daughter to Oedipus; Elizabeth Klett as A Stranger, an inhabitant of Colonus; Marty Krzywonos as First Citizen/Citizens; Amanda Friday as Ismene, daughter to Oedipus; Alan Weyman as Creon, brother to Jocasta the Queen; Peter Tucker as Theseus, king of Athens; Jennifer Fournier as Polynices, son to Oedipus; Ed Humpal as a Messenger, an Athenian attending on Theseus