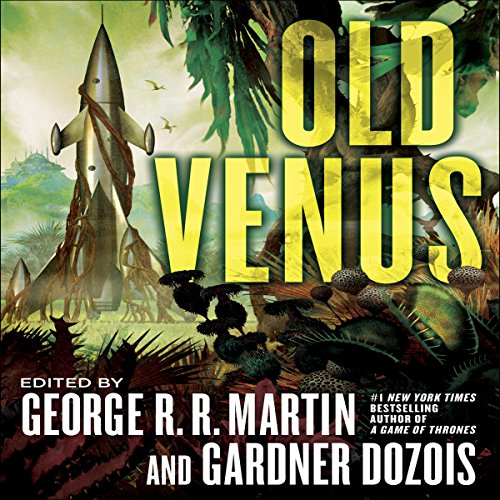 From pulp adventures such as Edgar Rice Burroughs' Carson of Venus to classic short stories such as Ray Bradbury's "The Long Rain" to visionary novels such as C. S. Lewis' Perelandra, the planet Venus has loomed almost as large in the imaginations of science fiction writers as Earth's next-nearest neighbor, Mars. But while the Red Planet conjured up in golden-age science-fiction stories was a place of vast deserts and ruined cities, bright-blue Venus was its polar opposite: a steamy, swampy jungle world with strange creatures lurking amid the dripping vegetation. Alas, just as the last century's space probes exploded our dreams of Mars, so too did they shatter our romantic visions of Venus, revealing, instead of a lush paradise, a hellish world inimical to all life.

But don't despair! This new anthology of 16 original stories by some of science fiction's best writers - edited by number-one New York Times best-selling author George R. R. Martin and award-winning editor Gardner Dozois - turns back the clock to that more innocent time, before the hard-won knowledge of science vanquished the infinite possibilities of the imagination.

If you could sum up Old Venus in three words, what would they be?

The stories in, "Old Venus", were all very good, and there was lots of them. I can never remember specific stories, but I know there was some that were so action packed that I felt like I was watching a movie thriller. Rather then thinking about them as being on Venus, which we now no is uninhabitable, I just imagined them being about distant planets in distant galaxies. This was my favorite, "Audible", selection so far. I look forward to more like this.

What did you love best about Old Venus?

most of it was interesting. the intro was great.

its alright. a good book to get in between something you really like. a nice rest from deep listening. and some good stories too.

I love the idea for this collection, and most of the stories are solid, with few even being excellent, and the generic range is impressive. My main problem was that there are simply too many stories, and after a while I started to get bored of swamps, amphibians, sleazy Russian colonists and rain. For this reason my favourite story was David Brin's, which has a much more imaginative take on the Venusian setting. The editors should probably have culled the weaker stories to produce a tighter and less repetitive collection.

The other problem is that many of these stories don't really have much to do with the idea of planet Venus and would work equally well if you crossed out 'Venus' and replaced it with 'Arglethorpe IV' or anything else; I suspect that the authors took a story they were already working on and just changed the setting.

The readers are mostly very good - I particularly enjoyed Harry Lloyd's work and Stephen Fry was a fun surprise. It's time for Roy Dotrice to retire though - at least, his quavery voice is utterly unsuited to a gung-ho action story.

I love collections of Science fiction. Short or otherwise they always seem to posit such wonderful worlds that we can explore. This book was awesome, a few of the stories were not to great in my opinion, but overall this book has some amazing tales in it.

I listen to a lot of anthologies, and I enjoyed this one quite a bit. All of the stories have a different feel but maintain a vintage grit about them... highly reminiscent of Pulp space sci-fi from the 50s or 60s, but with a better quality of character development.

Difficult to navigate between books

A great collection of sci-fi books, I skipped just one which I found boring. However audible isn’t thinking about user friendly at all, what a fail. There are about 10 books in this one big file however all the books are divided into anonymous chapters without names only numbers. So if you want to re-listen to a book you have to guess or remember it was chapter 25-31 or was it maybe 112-130? Yeah why give the listeners any information where from individual books start.