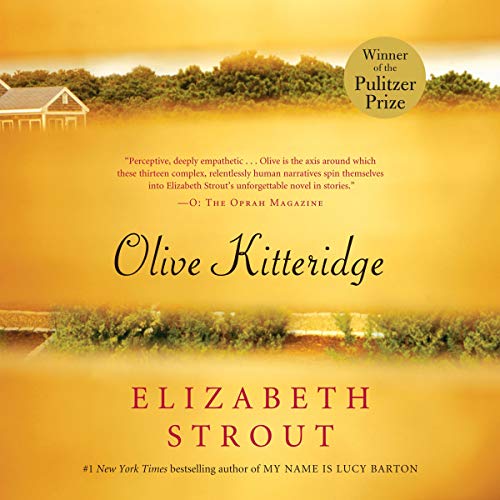 At times stern, at other times patient, at times perceptive, at other times in sad denial, Olive Kitteridge, a retired schoolteacher, deplores the changes in her little town of Crosby, Maine, and in the world at large, but she doesn’t always recognize the changes in those around her: a lounge musician haunted by a past romance; a former student who has lost the will to live; Olive’s own adult child, who feels tyrannized by her irrational sensitivities; and her husband, Henry, who finds his loyalty to his marriage both a blessing and a curse.

As the townspeople grapple with their problems, mild and dire, Olive is brought to a deeper understanding of herself and her life - sometimes painfully, but always with ruthless honesty. Olive Kitteridge offers profound insights into the human condition - its conflicts, its tragedies and joys, and the endurance it requires.

“Rarely does a story collection pack such a gutsy emotional punch.” (Entertainment Weekly)

“Strout animates the ordinary with astonishing force.... [She] makes us experience not only the terrors of change but also the terrifying hope that change can bring: she plunges us into these churning waters and we come up gasping for air.” (The New Yorker)

What listeners say about Olive Kitteridge

Depressing! Watse of a credit!

Multiple short 'stories?' Episodes in unfunny, detatched woman's life. No real beginning or end. Just overwhelmingly depressing life clips! I kept listening, thinking that there must be a story somewhere that might tie it all together. But - NO!

It's a Short Story Collection

I decided to read this since there is now a sequel. I didn't realize that it is actually a set of short stories in which Olive always seems to show up and may or may not play a significant part. I most enjoyed the stories that were directly about her with her husband and son. I would have rated this higher except I didn't really like all the "short story characters," many of whom were not really all that significant to the story, or at least to the parts of the story that interested me the most. I hope that the sequel is not written this way.

I look forward to the sequel and to watching the movie. I think that Frances McDormand is the perfect actress to play Olive and pictured her the whole time I was reading this. I liked the audible book narrator as her tone seemed to capture Olive's personality.

Sure this book is depressing -- about aging, death and kids who walk out of your life. But I like Olive's matter-of-fact look at things.

it was hard to follow.... the story was tremendously well written but so convoluted and filled with completely off topic characters....I had to keep going back and rereading thinking ahead miss something... like who are these people... over and over

Touching story about the imperfect nature of life.

I was touched by Olive and definitely understood her. Loved the narration as well. Looking forward to my next read by this author.

Wonderful in all ways

The story and narration were fantastic and I did not want the audiobook to end!

Several short stories that are either about Olive or at a minimum tangentially touch on Olive in some way. I suspect this will be appreciated much more by an older crowd. I also suspect most of negative reviews came from folks with more life in front of them than behind them.

Such a wonderful book. The narrator was perfect! I will be recommending this as a wonderful read.

I don’t get this book I guess. Olive Kitteridge is the most negative depressing character. The only take away would be not to live your life like her. I’m sure why I plugged away? Kept hoping for a pearl.

Olive is a complex soul

I often have difficulty with books that don’t have a clear, positive protagonist. Olive is painfully oblivious to her own cold rudeness but occasionally rises to great compassion. A frustrating gal to be our protagonist.
I recommend the book to those with patience for complex souls who are not always easy to be around.

Really good book. Thought provoking and worth your time. Loved Olive and hated her at the same time.

Olive Kitteridge is someone we already know

Enjoyed every minute of these entrancing gently visceral life vignettes.
Narrator was a character in each story and through out. 10/10

I couldn’t stop listening! The narrator is fantastic and brings real life to the characters, who are beautifully written in stories that are woven together to form a truly enjoyable, thought provoking, sometimes deeply sad but ultimately real and relatable story.

Jumps around too much

I found this book rather miserable for my tastes. I know it has had good reviews, but it was just now my cup of tea, too gloomy. Plus, it jumps around from story to story like the author had just taken a bunch of short stories (at the end they admit were sold to various magazines and newspapers), then tried to make them all work in one book for one story. I just didn’t get it; characters came and went with no rhyme or reason. Thank goodness I did it by audible otherwise I would not have finished it. The speaker was very good though. Sorry, just didn’t really like this one.

Really good expressive writing and read well, but no point to the story and kept wishing for the end.....

loved the people, the stories, the humour, the pathos. A joy of a book, so very human.

Despite the lovely narration I found the lead character dislikeable with a story that goes nowhere.

Didn’t want it to end

Wow. Occasionally, and only very occasionally, I’ll come across a book that I just don’t want to end. This was one of those books. I also bought the kindle version too but found myself listening to the audible version more, Kimberly Farr did an amazing job of performing it and really brought the story to life.
I would highly recommend this book and I can’t wait to listen to its sequel ‘Olive, Again’

I could listen to this for hours on end. the narration is soothing. the story feels real, raw, believable i love Olive. great characters.

These stories say so much about life in all its depth and ordinariness, you recognise the truths but had never put them into words before.

The reader is wonderful, with a rich slow voice, and able to give voice to the different characters. She adds meaning to the words, and warmth, she’s absolutely right for this book

It won the Pulitzer??

Utterly boring. I’m pretty shocked this book has had such rave reviews. I did not connect with the main character- I was only barely interested in this book in the very beginning and then.... it lost me
Sounded like I was listening to a pack of old ladies complaining about their life.
I was expecting so much more from this read.

A book to read over and over again

Olive is both awful and wonderful, often at the same time. She is a character both recognisable and unique. There is such wisdom in these vignettes of ordinary lives, quietly lived. I ended the book feeling deeply moved, and with just a little more understanding of others and the lives we all lead. A wonderful book.

Getting to know Olive

Elizabeth Strout has created a thoroughly believable and flawed character whom one comes to love throughout this performance.
I loved every moment of this ‘listen’ and unlike some of the books in my library, it will stay with me.
I thoroughly recommend !

I had to read this because it was a Pulitzer Prize winner. Being about the same age that I am now I could relate to her frustrations people feel being in a their 70’s. I took have given up on what we may change and am trying to enjoy what we still have:

I selected this book carefully following a review in the guardian. And because I want to Pulitzer prize and was so well reviewed I have stuck with it. But I actually have to end early because it’s making me miserable. Some people might find artistic merit in the phenomenological way The author rights. But I couldn’t take any more.

My dear friend recommended Olive Kitteridge to me
…I loved these stories. Thank you ES!!
Flannery O’CONNOR is black and unique.

Slow burn but I fell in love with the characters

Beautiful writing. Interesting character development. I loved the way the characters were interweaved. I loved this book and disappointed it ended. Narration is excellent.

Fabulous character, story and narration. So pleased to have discovered Elizabeth Strout. Am working my way through all her works.

Great. The print version was recommended to me, but I listened to the audio version while gardening. Enjoyed the story and Narrator. How a person appears to others, isn't always what the person is like or feeling. This can be lifelong as people learn about themselves. Looking forward to listening to the sequel.

The performance made it!

Kimberly Farr made this book for me! I don’t like cursing in books, but the way she said those words, made me laugh instead of cringe (for the most part). The beautiful language of this book came to light with her narration and the various voices of the characters were perfectly matched and enhanced my
Imagination of the story.