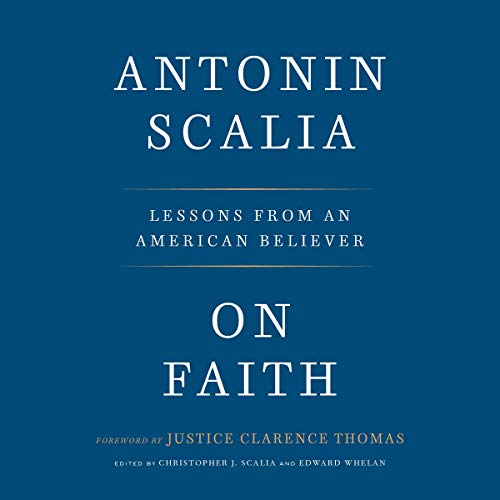 On Faith is an inspiring collection of the late Supreme Court Justice Antonin Scalia's reflections on his own faith, on the challenges that religious believers face in modern America, and on the religious freedoms protected by the Constitution. Featuring a personal introduction by Justice Scalia's son Father Paul Scalia, this volume will enrich every listener's understanding of the legendary justice.

Antonin Scalia reflected deeply on matters of religion and shared his insights with many audiences over the course of his remarkable career. As a Supreme Court justice for three decades, he vigorously defended the American constitutional tradition of allowing religion a prominent place in the public square. As a man of faith, he recognized the special challenges of living a distinctively religious life in modern America, and he inspired other believers to meet those challenges.

This volume contains Justice Scalia's incisive thoughts on these matters, laced with his characteristic wit. It includes outstanding speeches featured in Scalia Speaks and also draws from his Supreme Court opinions and his articles. In addition to the introduction by Fr. Scalia, other highlights include Fr. Scalia's beautiful homily at his father's funeral mass and reminiscences from various friends and law clerks whose lives were influenced by Antonin Scalia's faith.

A Man And Book That Changed Me

Judge Scalia's book came my way when I am presently struggling on becoming a Catholic and now I know what path I should travel down. This book is so profound and it will change you in some manner. What a man he was and his son does him proud, along with his daughter.
Thanks Judge.

A tremendous example of mere Christianity from the respected and powerful supreme Court justice Antonin Scalia. One experiences a dissolution of imagined barriers of Christianity and a unity/respect towards Christians and non-Christians alike. Lessons to be gained from various walks of life, which ever one might be on.

Judge Antonin Scalia was a great man with a keen intellect and an abiding faith. This book showcases both.

wonderful reading on the late Antonin Scalia, his faith and spiritual convictions in the Son of God.

Every once in a while a little light shines down and you encouraged by a life well lived.

A man of faith greatly missed

Justice Scalia was that rarest of man, a man comfortably secure in his faith and his role as father, husband, judge and sinner. God bless the law and faithful legacy he left for all of America.

Worth it just for the amazing funeral sermon preached by his son. Rich with moving autobiography, cutting wit, and scalpel-like argument. Love him like Ruth Bader Ginsburg (yes, they were dear friends) or hate him like most of her followers, you cannot fail to see what a mensch he was, on and off the bench.