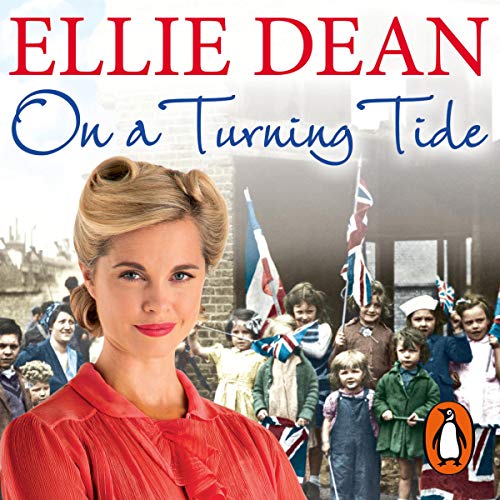 On a Turning Tide

Random House presents the audiobook edition of On a Turning Tide by Ellie Dean.

As the Allied troops draw closer to victory, life at Beach View Boarding House is still full of uncertainty.

Rosie’s plans for her wedding to Ron Reilly are plagued with misunderstandings. And when Ron takes on a secret assignment just days before they are due to say their vows, it seems their plans for a future together may be doomed.

Meanwhile, Peggy Reilly embraces her new managerial role at the uniform factory. It’s a welcome distraction while her husband, Jim, is still away fighting in the Far East. But when an old school adversary joins the factory’s ranks, Peggy must win her own battles on the home front.

As a new year dawns, hopes grow brighter for the return of loved ones - but a big sea change is still to come before Victory in Europe can be declared.

Victory is in sight, but the war is not yet won.

What listeners say about On a Turning Tide

I really like her series of books. Looking forward to the next one......due out in August.

final book in the series

loved the final book sorry it's come to an end. Will definitely look for more books by this author

Another thoroughly enjoyable read in the series

Story and performance great. Another book which meant I haven't had much sleep over the last couple of nights so i could finish it. I hope that there is more to come.

I waited in great anticipation for this book. Ella Dean did not disappoint. wonderful addition to the series, of which I have read/listen to all. many more than once. but why oh why are we listening to Penelope Freeman. Julie Maisey is the best reader. her accents are on point and makes you feel part of the story, I feel I can capture an image of the differing individuals that makeup beachview. The change in the narrator took much of the pleasure away from me. nothing against Penelope Freeman but she is not beachview and the accents she used were at best requires improvement. Please go back to Julie Maisey. I want to feast with pleasure on the final books on beachview. go out with 5 star bang not a damp fizzle

I'm going to miss all that goes on in cliffhaven, Ellie Dean makes you feel you are with them all, it's going to be a sad day when cliffhaven is finished.

Great story, didn't want it to end. Lots of drama, excitement, romance, one of her best.

I loved this book and all the books that came before it. Extremely well researched, and the storyline woven into the many historical facts was full of surprises all the way through. A thrilling story, I didn’t want it to end.