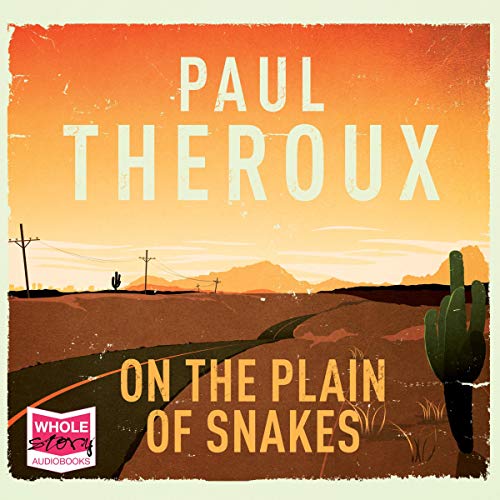 The master of contemporary travel writing, Paul Theroux, immerses himself in the beautiful and troubled heart of modern Mexico.

Nogales is a border town caught between Mexico and the United States of America. A 40-foot steel fence runs through its centre, separating the prosperous US side from the impoverished Mexican side. It is a fascinating site of tension, now more than ever, as the town fills with hopeful border crossers and the deportees who have been caught and brought back. And it is here that Paul Theroux will begin his journey into the culturally rich but troubled heart of modern Mexico.

Moving through the deserts just south of the Arizona border, Theroux finds a place brimming with charm, yet visibly marked by both the US border patrol looming to the north and mounting discord from within. Attending local language and culinary schools, driving through the country and meeting its people, Paul Theroux gets under the skin of Mexico.

From the writer praised for his 'curiosity and affection for humanity in all its forms' (New York Times Book Review), On the Plain of Snakes is an urgent and mesmerising exploration of a region in conflict.

What listeners say about On the Plain of Snakes

There's a good 3-4 hours of travel writing worth reading here. Of course, that leaves 15-16 hours of, at times, mind-numbing lecture and political diatribe. And unless you're a masochist, or writing a paper on contemporary Mexican literature, do yourself a favor and skip the entire chapter "Mexicans on Mexico."

The only reason I stayed through this to the end is that I lived or traveled in Mexico for over 25 years, and was willing to wade through the tangled jungle of politics and bad narration in order to reach the occasional scenic view of the land.

A good narrator might have improved this book, but we'll never know. This guy has the strangest, disconnected rhythm to his reading, slicing and dicing his sentences, and frequently mispronouncing words. If I had cared enough, I might have made an inventory of his mispronunciations, but it would be a substantial book all by itself.

For a book on Mexico, they could surely have found a narrator who knows how to pronounce Mexican Spanish. There are plenty of Spanish speakers available. Before you think I'm just being picky, even Taco Bell knows that "taco" is pronounced tahko, not tack-o. Seriously - tack-o? And what's with the "zed"for the Z in EZLN (acronym for - ejercito Zapatista de liberación nacional)? That's neither Spanish nor gringo English.

If you like being lectured to, or just need a sleep aid, then this may be the right pick for you. If not, move on, and find something more interesting, and better narrated.

I found the narrators tendency to use a stereotypical Mexican accent when a Mexican character was speaking very disconcerting. The "evil:" characters all seemed to have cliche features like beady eyes or a pig snout. It was all to black and white in my estimation.

Gain a better understanding of Mexico

Mexicans dont all speak Spanish. Many speak indigenous languages. NAFTA created many of Mexico's problems. Factories were relocated from America to just over the border in northern Mexico. The workers earn 10 dollars US a day to make Bose speakers. In Chiapas, the most southern province in Mexico, Guatemalans, and Central Americans ride the train north, which is known as, La Bestia. Many are robbed or raped. People fall off as they try to board the trains and have limbs severed off. An indian reservation in America is a convenient spot for drug dealers to send their product north and bring guns from America south. That area isnt the US and it also isnt Mexico. The poorest Mexicans live in the south. Mexicans worshiped death before the Spanish foisted their language and God on Mexicans. The numerous stories of migrants coming to the US in search of work was also illuminating. Most return to Mexico due to family issues. Maybe one day revolution will divide this dangerous country, which is being destabilized by corruption and cartels. The shocking dismemberments and decapitations occuring there reflect a country descending into chaos.

Who is the narrator. Stop please!

Did they run this by any MEXICANS? I’m borderline offended by how badly this narrator speaks Spanish. Guelaguetza is a famous festival that’s not hard to pronounce and the pronunciation on simple things is HORRIBLE.

I have read all of Paul Theroux's travel books. On the Plain of Snakes is among his best. It is reflective and provocative, both. I frequently listen to books and Joseph Balderrama's narration outstanding. I would happily listen to him again.

My book club picked this book, my first book by this author. Listening to it was the only way I could get through it. Much too long, detailed and often repetitive. I felt like the author wanted to show off his own knowledge from Homer to Hegel. Would not recommend.

A ride through Mexico

I felt like I was riding in the car alongside one of my favorite travel writers. I liked hearing stories of people crossing the border. As a near border resident myself, it made the book especially relevant.
The narrator seemed to mispronounce some things, but I found it forgivable and thought it was probably caused by switching languages frequently. I enjoyed the chance to learn some more Mexican phrases.

I frequently had to remind myself that this was not a historical fiction/non-fiction. These people and places exist alongside me within the same calendar. This audiobook gave me a better view of the story behind the headlines concerning Mexico. I appreciate the learning I received from this experience.

hard to read about things you know happen, but the author writes so well it's easy to listen to. I learned things I'd forgotten from long ago and many things I never knew. highly recommend.

I'm so impressed with the narration of Joseph Balderrama!!! His many accents are so coherent and authentic - for me it made this good book a great book.
This is in contrast to many other well meaning narrators, who are incapable of pronouncing even one word in a foreign language correctly.

Not just crisscrossing the border in his Massachussets car, Paul Theroux ventures south to Chiapas where he encounters trans people Muxes and writes about discrimination in Mexican society. Then he meets with masked subcomandante Marcos, leader of the Zapatista uprising and is invited to make a speech.

A Sublime piece of work

A wonderful journey and very well read. A master of travel and scrivening. An inspiration.

Great performer, lovely voice. But why do you treat commas like full stops (periods)? long pauses between listed items made for confusing listening. but still great.