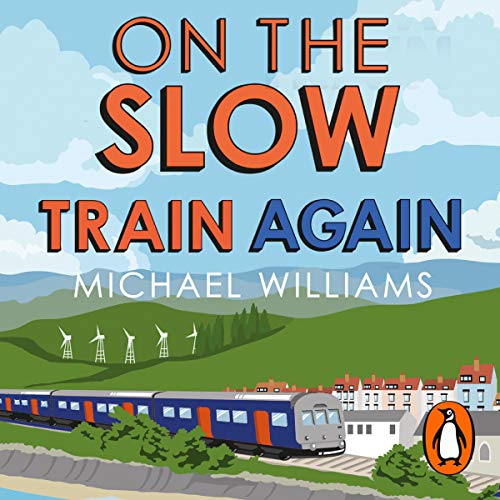 On the Slow Train Again

Michael Williams has spent the past year travelling along the fascinating rail byways of Britain for this new collection of journeys. Here is the 'train to the end of the world' running for more than four splendid hours through lake, loch and moorland from Inverness to Wick, the most northerly town in Britain. He discovers a perfect country branch line in London’s commuterland, and travels on one of the slowest services in the land along the shores of the lovely Dovey estuary to the far west of Wales.

He takes the stopping train across the Pennines on a line with so few services that its glorious scenery is a secret known only to the regulars. Here, too, is the Bittern Line in Norfolk and the Tarka Line in North Devon as well as the little branch line to the fishing port of Looe in Cornwall, rescued from closure in the 1960s and now celebrating its 150th anniversary taking families on holiday to the seaside. From the most luxurious and historic – aboard the Orient Express – to the most futuristic – on the driverless trains of London’s Docklands Light Railway – here is a unique travel companion celebrating the treasures of our railway heritage from one of Britain’s most knowledgeable railway writers.

What listeners say about On the Slow Train Again

I'm really bummed out that for some reason the second part is available as an audiobook, but not the first? I had a rough idea of where in Britain the routes were located, but having a map available would be helpful for potential readers. Not a book that can be read straight through, say a route at a time over a longer period.

This is well read and certainly made me want to travel the UK again. This is not only for rail buffs as there is extra interesting facts all along the way. The deep tones of the narrater fit well with the subject.

For those who enjoy Rail travel

Where does On the Slow Train Again rank among all the audiobooks you’ve listened to so far?

What about Michael Tudor Barnes’s performance did you like?

He's very good with the anecdotes in the local dialect.

disappointing book. was hoping for evoking descriptions of the places trains pass through, and stories of the people he met along the way. unfortunately it's much closer to a list of notes from a train hobbyist/enthusiast. descriptions of crossing boxes, railway closure decisions, colours of railway brands, the changes in frequency of trains with excitement about steam train displays. not my jam. feels like an indulgent one sided historical perspective. wouldn't recommend.

If you love trains...

I throughly enjoyed this book. Whilst there is a lot of information about trains , the author gives historical and background information that puts it into context. I found it informative , interesting and enjoyable. The narration was clear and easy to follow.

The writing and recounting of the author's travels around Britain on neglected railway lines charms the listener with its mixture of scenery and wistful descriptions of a vanishing world. Recommended.

Where does On the Slow Train Again rank among all the audiobooks you’ve listened to so far?

Like Churchill's History of the English speaking people for Railway buffs !

What was one of the most memorable moments of On the Slow Train Again?

Both technical , descriptive and humorous

What does Michael Tudor Barnes bring to the story that you wouldn’t experience if you had only read the book?

Very knowledgeable presented in an interesting and entertaining way... never bored with this book.

Really enjoyed the narrator helped to bring the descriptive passages to life.... listened to the book three times now

If you like railways , British countryside... and not Beeching .. this is one for you !!

Going to be visiting the journeys described....

This book as it claims is not Paul Theroux revisited, but it is a very good enjoyable escape to parts of Greta Brittain

Wonderful description of some lovely journeys

This is a lovely book outlining some of the lesser known journeys on the British railway system. It is not just for railway buffs. The author often alights from his train to talk to interesting local characters and explore the history of the areas through which he is travelling. He also does not fail to take a well aimed swipe at the vandalism of Dr Beeching who closed down so many lines in the 1960s.

The voice of Michael Tudor Barnes perfectly complements the subject matter. However I have one major criticism of the reader and that is the appalling pronunciation of some of the place names in the book. St Keyne pronounced as KANE rather than KEEN and Princes Risborough pronounced as RISEborough rather than RISborough were two of several glaring examples. It does jar with the listener and could have been avoided with a little research. I've knocked a star off for this.

Audio Chapters do NOT match the book chapters

The text itself is entertaining and engaging.

What about Michael Tudor Barnes’s performance did you like?

The narrator cannot be faulted (apart from a few mispronounced places if I recall correctly!), overall, he reads well and his voice is a good match for the subject and pace of the book.

Why don't the audio chapters match with the book chapters??? This is the second book I have purchased where this is the case and I find it unnecessary and annoying (why 'carve' the audio into 'random' chunks instead of following the 'natural' chapters of the book?)

AUDIBLE, please indicate when an audiobook DOES or DOES NOT have 'real' chapters (in a similar way that Kindle books indicate 'real' page numbers!).

YET AGAIN as in so many of your offerings the "chapters" of this edition bear no relation to those of the original book, as reflected in the narrative. WHY WHY WHY can you not do a better job of adaptation which reflects the structure of the original? Are you stupid or just neglectful?