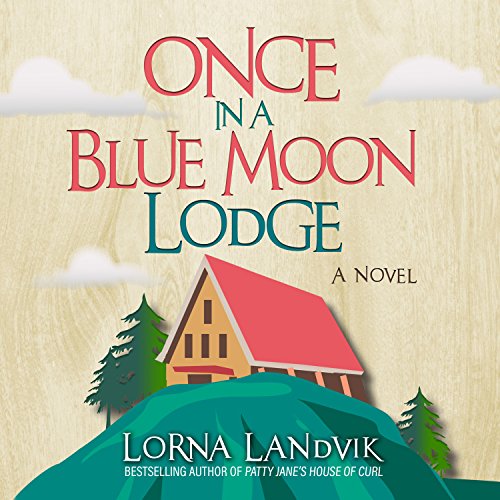 Once in a Blue Moon Lodge

Set adrift when her mother sells the salon that has been a neighborhood institution for decades, Nora Rolvaag takes a camping trip, intending to do nothing more than roast marshmallows over an open fire and under a starry sky. Two chance encounters, however, will have enormous consequences, and her getaway turns out to be more of a retreat from her daily life than she ever imagined. But Nora is the do-or-die-trying daughter of Patty Jane, who now must embrace the House of Curl's slogan: "Expect the Unexpected".

With her trademark wit and warmth, Lorna Landvik follows Nora and an ever-growing cast of characters between city and wooded retreat, Minnesota and Norway, a past that's secret and a future that's promising but uncertain. Responding to a mysterious letter with a Norwegian postmark, Nora's grandmother Ione travels to her native land to tend to a dying cousin and her husband - two people who played a painful, pivotal role in her past. Nora accompanies her and is surprised by her grandmother's long-ago love story - but even more surprised by the beginning of her own.

I like just about everything that this author writes. Not the case this time. The saccharine sweet voice of the main character grated on my nerves. Followed by too many characters to remember because I found I just didn’t care about them. Sorry, I really wanted to like this book.

a bit too perky in some parts

I found it to be a bit too perky in some parts. Ok story though.

Another delightful journey into Lorna Landvik's multi-layer, genius writing! I'm always sad when the stories end...I love her quirky characters who somehow teach us the true meaning of love and life. Once In a Blue Moon Lodge had me hooting, weeping, reflecting, giggling, and full of joy bumps...or goose bumps as we called them growing up in Minnesota. The audiobook reader was quite good, but Lorna's own rich voice, humor, and interpretation of her characters is my preference. Thank you Lorna! Can't wait for the next one!

Way to long and to detailed! Yes liked her other books but was disappointed in this one

another hit from Landvik

another book from lorna Landvik that you won't want to walk away from. her natural and deep character development hooks you throughout. from serious to funny this book doesn't disappoint