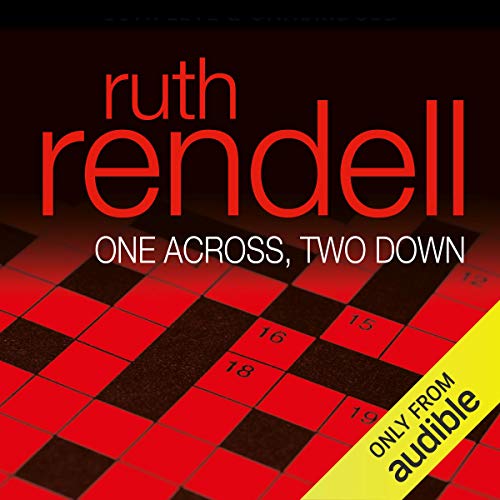 One Across, Two Down

There are only two things in life that interest Stanley: solving crossword puzzles, and getting his hands on his mother-in-law’s money. For 20 years, the puzzles have been his only pleasure, the money his only dream. It has never occurred to Stanley that his mother-in-law would try to outsmart him and the money would never be his. Until now.

It is only now that Stanley, so clever at misleading double meanings and devious clues, decides to construct a puzzle of his own - and so give death a helping hand.

A must listen for any true Rendell fan! Excellent narrator as well. I’ve listen to several and this is one of my favs.

One Across, Two Down

This fairly early, well 70s, RR novel centres around Stanley Manning, a middle-aged crossword fanatic (hence the title) and his long - suffering wife, Vera. Maud, Vera's spiteful and lazy resident mother makes Stanley's life hell, but via her own admission of great fortune leads Stanley to construct the puzzle of his life.

I did enjoy this book. As ever, RR evokes a suburban world of gossip, intrigue and hidden lives behind respectable net curtains. Stanley is a typical antihero of this genre.

The narrator, Nicky Henson, had a pleasantly deep voice which was particularly suited to the male roles. That said, when he attempts the female roles of say, Maud and Ethel, well let's just say that he channels Monty Python. The recording was also a little echoey at times, but it wasn't particularly distracting.

stanley is obsessed with doing crossword puzzles and the money maud with leave when she dies to her daughter, his wife, and all the plans he has to spend it.
well written characters, down trodden viv who works to keep them afloat, stanley who would rather laze at home than work and maud who thinks her daughter could have done far better than marry stanley wanting viv to leave him and live with her.
this is the first book I have listened to by ruth rendall and is very much of its time when twenty thousand pounds was a fortune.
nicky Henson performed the book well doing a reasonably good female voices although he has a deep voice.
I enjoyed the book.

it was easy listening great narrator I couldn't stop listening 2 nights I finished it ,,,,,,

A book like this is well suited to the audio format, being both entertaining and easy to follow. It has an intriguing set-up in the battle of wills between a rich old woman scheming to drag her downtrodden daughter away from her no-good husband, and the no-good husband scheming to inherit his mother-in-law's money. There is a current of suspense running through the story that is Hitchcockian in tone, with twists in the plot to the end.

Nicky Henson is a clear and expressive narrator. True, the mother-in-law does sometimes sound like she's wandered out of a Monty Python sketch, but otherwise the characters are well differentiated and the pacing and phrasing are excellent.

Ruth Rendell's writing features precise and descriptive language with well-rounded characters. I thoroughly enjoyed listening to this book and will seek out more of her backlist I've never got around to reading.