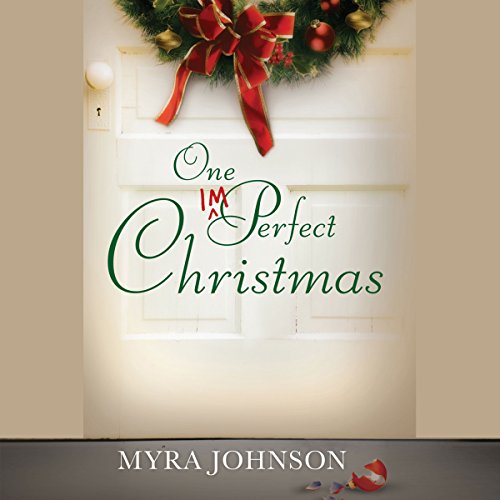 Graphic designer Natalie Pearce faces the most difficult Christmas of her life. For almost a year, her mother has lain in a nursing home, the victim of a massive stroke, and Natalie blames herself for not being there when it happened. Worse, she’s allowed the monstrous load of guilt to drive a wedge between her and everyone she loves - most of all her husband, Daniel. Her marriage is on the verge of dissolving, her prayer life is suffering, and she’s one Christmas away from hitting rock bottom.

Junior-high basketball coach Daniel Pearce is at his wit’s end. Nothing he’s done has been able to break through the wall Natalie has erected between them. And their daughter Lissa’s adolescent rebellion isn’t helping matters. As Daniel’s hope reaches its lowest ebb, he wonders if this Christmas will spell the end of his marriage and the loss of everything he holds dear.

What listeners say about One Imperfect Christmas

I'm having a difficult time understanding all the outstanding reviews for this book. I usually love Christian fiction, but the longer this book went on, the more frustrated I became. It seemed as though there was some deep dark secret that caused Natalie Pearce to ignore her husband and daughter, even after her mother's stroke and entry into a nursing home . . . way after the shock and pain of her mother's condition had hit her. She chose work and career over her family, and continued in a downward spiral that was, in my opinion, by choice. The dialog, first describing how much she still loved her husband, Daniel, then from Daniel's point of view, trying to figure out how to win back his wife, was exhaustive. Having come through MANY horrific events in my 65 years of life . . . including my father's alcoholism, my son-in-law's sudden death in an automobile accident, and others . . . this book felt like one long tale of bad choices and prolonged drama . . . with little resolution.

The true meaning of Christmas shines through disaster, heart break, love, emotions, family, forgiveness, life and even death. you will laugh, smile, feel, think, and even tear up. Highly recommend.

Story had potential but missed the mark

This story of a loving family’s deep grief after the matriarch suffered a severe stroke really had potential to inform, encourage others who may have experienced a similar challenge as a family. Instead, it was a frustrating story of a self centered main character, Natalie, who basically made a nightmare for everyone around her, as though her grief and pain were worse. Her feelings of guilt surrounding her mother’s stroke seemed overplayed. Having worked in rehab for many years and seen many variations on families responding to loss and challenges, I wish the author had gotten more input for accuracy, that she could have woven into the story to uplift and educate the listener. Instead, it felt like a broken record of “poor Natalie” and her path of relational destruction. Although this is a faith based story, there was not much faith used to support the story or bring healing. Huge missed opportunity by the author. And the emphasis on her mom’s ability—or inability to paint the star at Christmas? It was just so overplayed in view of the mother’s significant physical deficits.
The narrator was ok—but some of the time her voicing felt very clipped. However she had a tough story to communicate.
Cannot really recommend this audible.

Such a pleasure to hear a story with such heart felt love of family, new beginnings and Christ’s love.

I loved this book. it makes you stop and think about life and what/who you hold valuable.

"It's Like hearing a Hallmark Hall of Fame story"

I read and reviewed this book on Amazon when it first came out in paperback. Then I read it again on my Kindle some years later. And now I have just listened to it as an Audible book.

Listening to the book creates a very different experience. While listening you can close your eyes and just let the story wash over you. There is no reading effort. The job of interpreting the emotional context of each scene is in the hands of the narrator. There is still the 'theater of the mind' creative experience but it is far different than it is when reading. I enjoyed this book most as an Audible book listening experience. But then I had read the book twice before.

I give the narrator very high marks for this Audible version because of her use of multiple voices. With an Audible book it is very important for the voices of the major characters to be different and to sound like the sex they are. Male voices have to sound like males and females, females. The narrator also needs to get the emotions correct. As such the narrator must perform the book, not just read the words. This book is excellently performed and I give the narrator my highest marks.

That said, I'm going to post some of my print review as it is quite detailed and the book is worthy of serious commentary.

In good novels the characters change in significant ways as the story unfolds. In serious works, like "One Imperfect Christmas", not only do the fictional characters change but the reader changes as well. This potential for growth in the reader's consciousness is what gives great literature its universality and its timelessness.

Serious literature has the potential to impart experiences, knowledge, and sometimes even wisdom. More importantly, literature can enlighten the reader in a way which might not be possible in any other fashion.

Here's what I mean:

Have you ever lamented: `If I only knew then what I know now'?

I think this lament is common to all mankind. The desire to learn from our mistakes, before we make them, is so prevalent that some have even said that `youth is wasted on the young'.

This is because young people usually lack the life experiences necessary to view life `now' as they will eventually view it in the future when they are older (and hopefully wiser).

Why mention all this in regard to "One Imperfect Christmas"? Because reading this book reminded me, in a most forceful way, that there is a way to bring the future into the present. This can be achieved via the vicarious experiences provided by serious literature.

"One Imperfect Christmas" is serious literature. The situations covered in the story span three generations. Therefore the reader `sees' and `feels' the story from three distinct perspectives.

When reading "One Imperfect Christmas" the reader will experience what it is like to be a middle aged mother overwhelmed by the guilt and anger she feels towards her incapacitated mother while at the same time having to deal with her wayward teenage daughter.

The reader will feel what it's like to be a husband who is trying to do everything within his power to save his marriage and help his beloved wife. And the reader will suffer his anguish when nothing he does works and when, time after time, he is rejected by the one he loves most.

The reader will also experience what it feels like to be the teenage daughter who has no idea of the depth of her parent's problems. The reader will watch helplessly as this loving daughter tries simple and naive solutions to the complex problems facing her family. The reader will feel the good daughter's sorrow when her `foolproof' plans come to naught.

Life often does not provide simple solutions to complex problems. The reader will also experience what it is like being a helpless parent in her sixties seeing how her problems are causing serious discord to the ones she loves most. Indeed, the reader will feel the angst of being powerless to do anything about problems that seem self-induced.

"One Imperfect Christmas" is a drama that calls for faith. It is a faith based story that is full of hope and challenge. The story features a beautiful fifty-year romance and what might yet, with God's help, become a second fifty-year romance. While the story has `Christmas' in the title, the action spans the period between two Christmases a year apart. It is a timeless story that can be read at any time of the year.

The story shows that sometimes the stresses of life can be too much. Given enough stress, a personal crisis may cause even a well disciplined life to spin out of control. Since this loss of control can be hidden from everyone else, at least for a little while, the victim is likely to suffer without any support. Others may even think the suffering victim is causing his or her own problems.

"One Imperfect Christmas" is not always easy reading but it is always worthwhile reading that is both rewarding and heartwarming. It's not easy because it is so true to life. It's not easy to watch and experience the obviously self-destructive behavior of the mother who is trying her best to get professional help but who is too fragile to find traction. It's not easy reading but it is always enjoyable reading. I loved every minute reading "One Imperfect Christmas" from the first page until the last.

I not only give "One Imperfect Christmas" my highest Recommendation - I consider it the Required Reading for One's Christian Heart.

"One Imperfect Christmas" Will Make A Keepsake Christmas Gift!

Would you listen to One Imperfect Christmas again? Why?

Yes I will listen to it again.

The inspirational message in this book

Which character – as performed by Amy Rubinate – was your favorite?

Natalie. Even though I got frustrated with her, She was real and in the end responded to the Lord.

If you could take any character from One Imperfect Christmas out to dinner, who would it be and why?

I would love to take Lyssa along with her parents and tell them it will be all right to listen to the Lord.