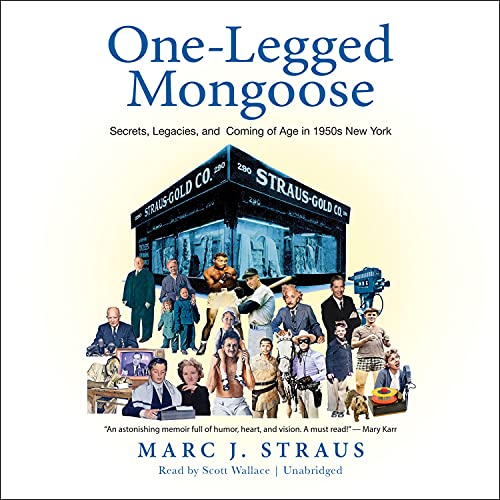 It’s June 1953, and ten-year-old Marc Straus is in his mother’s car, getting sick from her cigarette smoke on his way to a Hebrew lesson. He and his younger brother, Stephen, are transferring from public school to a Yeshiva. His parents haven’t said why they’re transferring - the family isn’t religious. So all Marc knows is he’ll have to protect his brother. Stephen’s a delicate kid other kids pick on. Marc’s a street fighter who knows how to wall off the pain.

So begins One-Legged Mongoose, Marc Straus’ vivid, compelling, you-are-there memoir of two years in the life of a precocious, scrappy Jewish kid carrying a dark secret as he embarks on the journey to young manhood in 1950s New York. When school starts, Marc begins commuting four hours daily to a different world, where kids are smart like him and fight with words instead of fists, and a caring principal takes the troubled truant under his wing. Marc works at his dad's textile store on Sundays, learning about honor and hard work from his immigrant father. At home, he faces his volatile mother.

Straus encounters Anti-Semitism in public school, in the community, and even in the Boy Scouts. And it’s the Scouts that lend the book its title - a nod to a campfire story about a half-man, half-mongoose predator that’s almost the height of a full-grown man, and that Straus and the other boys of Troop 300 are tasked with locating. But, as Straus explains, “I was willing to face it. I know all about monsters.”

Marc starts rethinking his risk-taking way of life, often sidelined by injuries to his eye, polio, and a near-fatal hit-and-run. A voracious reader, he looks to books for insights - What would Santiago do? - and comes to accept that he’s not invulnerable. Life will wound him, but the rest is up to him.

An unflinching look at child abuse and one boy’s ability to rise above it, One-Legged Mongoose reminds us of the bonds between siblings and the power of family secrets.

What listeners say about One-Legged Mongoose

Engrossing stories of everyday life growing up in a 1950's NYC. The author focuses on two specific years from his childhood - aged 10-12 - an age caught between childhood and adulthood. This is reflected in the writing style which has the bravura and pep of a young streetwise boy, while also being astute and questioning of the world around him.
Alongside the boys-own tales of brawling and hijinks, there is also a deep, familial emotional thread running through via the authors protective relationship with his younger brother and the turbulent interactions with his fiery tempered mother.

Particularly enjoyable are the details - the author delivers a Proustian level of recollection for everyday but fascinating observances which transport the listener thoroughly to that space and time.

A slice of 50's American life, replete with the language and concerns of the time, landmark political occurrences and the ongoing effects of the war - as seen through the perspective of a thoughtful young boy beginning to make some sense of it all. Highly recommended!

The narrator on this audio book version does a good job expressing the schoolboy cadence of the writing style, conveying the excitement and curiosity of the book.