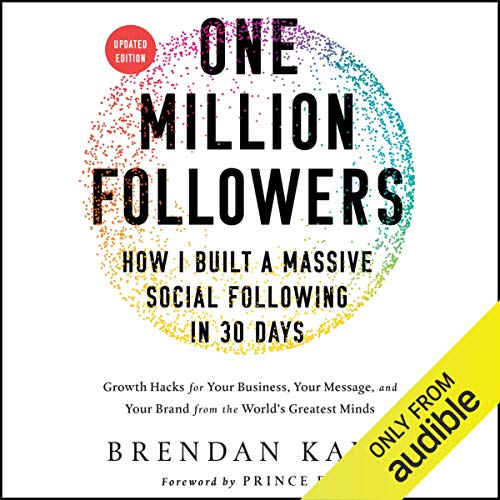 More than 60 billion online messages are sent on digital platforms every day, and only a select few succeed in the mad scramble for customer attention.

This means that the question for anyone who wants to gain mass exposure for their transformative content, business, or brand or connect with audiences around the globe is no longer if they should use social media, but how to best take advantage of the numerous different platforms.

How can you make a significant impact in the digital world and stand out among all the noise?

Digital strategist and “growth hacker” Brendan Kane has the answer and will show you how - in 30 days or less. A wizard of the social media sphere, Kane has built online platforms for A-listers including Taylor Swift and Rihanna. He’s advised brands such as MTV, Skechers, Vice, and IKEA on how to establish and grow their digital audience and engagement. Kane has spent his career discovering the best tools to turn any no-name into a top influencer simply by speaking into a camera or publishing a popular blog - and now he’ll share his secrets with you.

In One Million Followers, Kane will teach you how to gain an authentic, dedicated, and diverse online following from scratch; create personal, unique, and valuable content that will engage your core audience; and build a multimedia brand through platforms like Facebook, Instagram, YouTube, Snapchat, and LinkedIn.

Featuring in-depth interviews with celebrities, influencers, and marketing experts, including:

One Million Followers is the ultimate guide to building your worldwide brand and unlocking all the benefits social media has to offer. It’s time to stop being a follower and start being a leader.

What listeners say about One Million Followers, Updated Edition

This book took 5 minutes of information and managed to stretch it into 7hrs and 50 minutes of pure pain.

A full summary of useful information:
Post often on social media
Review what works
Do more of what works
Buy Ads

A lot of advertisement for his own company

I don't want to pay for advertisements, I want to pay for information. So many times the author writes "we have workshops for that" "e-mail me if you're interested in this" ext.... This is the quality I would expect from a free e-book.

Wow, if I hear Brendan Kane read out “email me at”, “visit my website at” or “read my blog at”, I’m going to lose it! He says that at least 10 times in each chapter. This is literally the biggest annoyance. He had some good content but it is lost at his self promotion. There are other books with authors that actually what to teach you tactics. The biggest thing you will learn from this book is Brendan’s website URL.

Good but took too long

All of the important information that actually mattered could’ve been said in less than an hour.

This is a fast, easy and practical read for anyone who wants to build a brand on social media.

ONE MILLION OR ONE, You will be enlightened!

Newly introduced to Brendan Kane’s work, I am hooked.
Regardless of the growth you are looking for, the principals are truly enlightening.
We can too easily make a simple strategy complicated.
Brendan explains very clearly what is possibly if we are willing to put in the work.

Very unimpressed and found zero value in this book. If you are a small creator and looking to grow, this is NOT the book for you. Another “Guru” who’s name you will regret hearing if you buy.

A must for anyone looking to build a brand

Loved this book and the emotion and sensarity the author put into reading and writing it.

This author took 7 hours to tell me in 5 minutes what I already knew. What a waste of time. NOT COOL.

Love that he is all about heart, service, value, and doing what’s right while still building a brand and business.

If you want to hire Brendan this is the book for you.

Basic premise is try something, if it doesn't work, try something else. There is very little actual information or knowledge that anyone can gain by watching 1 or 2 videos on YouTube.

I guess Brendan achieved his goal of wanting to sell his book but it only takes a quick look at his Instagram to see that he only advocates paid campaigns and clickbait. The book is just one on-going advert for his website and further training whilst just repeatedly telling you to pay for advertising or support from other 'influencers'. This review should save you a lot of time, find something else to listen to

Inspiring book to listen to.

Take breaks while listening, go back over chapters and make Key notes.

There is so much more education available on subjects, that I didn't even realise what I was missing out on. This book has actually taught me quite a lot, so glad I took the time the study this ! Anyone genuinely interested in learning how marketing works on social media platforms, this is a book to listen to.

All Sizzle and no Steak

Lot’s of stories of how high profile celebrities with million dollar marketing budgets such as Justin Bieber and Dua Lip grew their brand. The book consists of vague advice and constant reminders to visit the authors website or buy his course.

Instead of serving the reader, this book appears to be a marketing tool for the author. Disappointing.

50 mins in and it’s still the intro about how this book will help you… basically try something and if it doesn’t work try something else. Oh and it you want help hire Brendan 🥱

If you're looking for a shortcut, this isn't it

Achieving success is hard work, and getting success online is no exception. This book can definately point you in the right direction. But in the end you'll have to invest the time and money. if you not ready for that then tis book or any other book on the subject is a waste of your time man money.

Didn't get through the first Chapter

Repeated himself every couple of lines. My time is too precious to waste like that. I'm sure it works have been good info, but I didn't feel like sitting through a whole book on repeat (and sales) evey 5 mins

Best book for a business to read!

Very insightful for someone who wants to start a business! Easy to understand and gives you things to start implementing right away! Best book I’ve read all year!

Very Useful for me

I found some very useful information in this book. would recommend to anyone with a dream

wow, the most informative read I've had in a world full of vague information. really gives you the tools and information you need to market your brand. love it

Will be listening to this book a few more times. Next time I’ll be sitting with a note pad and pen