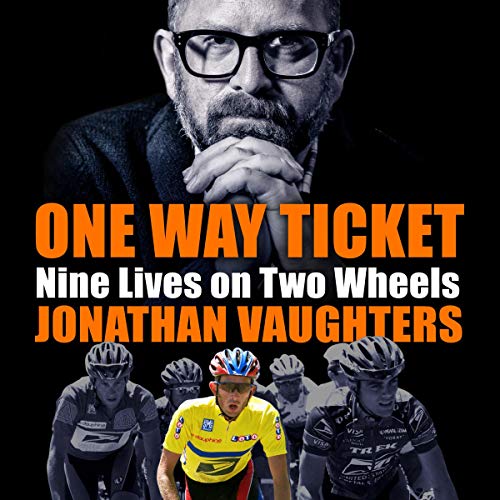 One Way Ticket is the story of a man and modern cycling.

Jonathan Vaughters is one of the leading figures in world cycling, a record-breaking mountain climber, Tour de France stage winner and former teammate to Lance Armstrong. He is now manager and influential figurehead of the renowned Education First World Tour team.

In One-Way Ticket: Nine Lives and Two Wheels he describes a journey from driven teenage prodigy, travelling to races in the back of his dad's station wagon, to an obsessive determination to make it big in European racing - whatever the cost. He tells the story of his transformation from poacher to gamekeeper, detailing his painful decision to finally come clean about his own descent into doping - and to persuade others to do likewise - by providing more than enough shocking testimony to USADA (US Anti-Doping Agency) to explode the Armstrong myth.

Working in collaboration with Jeremy Whittle, former cycling correspondent to The Times, now writing for The Guardian, Vaughters reveals the ease with which, his illusions shattered, he walked away from European racing. He documents his own suffering in races, the trials of establishing a team and mentoring young riders, and the dizzying highs of success in races such as the Tour de France, Giro d'Italia and Paris-Roubaix.

Vaughters' long and winding road mirrors that of cycling itself, as this compelling but troubled sport still struggles, after years of scandal, to restore its credibility. Along the way, he shares his unique experience to lift the lid on a world he has both loathed and loved, detailing the fights and fall-outs with cycling's leading figures, including Lance Armstrong, Pat McQuaid, Johan Bruyneel, Bradley Wiggins and Dave Brailsford.

What listeners say about One-Way Ticket

Engaging and revealing, but still questions

I really enjoyed this book and was gripped. There were some interesting revelations, but I felt that he struggled to fully open up in the way that riders like Thomas Dekker and Tyler Hamilton have done. Crucially I didn't feel that he provided enough reasoning or evidence for why he thinks cycling is now clean. He also didn't tackle motor doping. So I was still left with a lot of questions.

I also found the level of detail sporadic. There was a lot of information about his childhood and formative years. However, by comparison I felt that there was relatively limited attention paid to some very significant events, such as his team winning the Giro, which I found surprising. I also felt that there was insufficient information about the current state of professional cycling and issues such as TUEs and motor doping.

Interesting and engaging look into professional cycling with quite a lot of focus on doing issues in the 90's but certainly not just about that. Enjoyed the content but very poorly read. The narrator sounded out of breath held the time and has a very poor understanding of punctuation! Not sure how it was ever published like this to be honest!

Can the reader actually read!

Absolutely dreadful performance (and horrendous drop-in ‘corrective’ edits!) detracts from the story of an interesting life.

The actual book was quite interesting but Vaughters narration was awful. He sounded like a 6 year old reading a book and following the words with his finger. Why did no one get a professional narrator in to read the book?

A really good insight into the man and the world of pro-cycling. I have read many similar books but this is the best and possibly the most complete and honest account.
GREAT READ👍

An autobiography read by the author - added a extra dimension. At times JW seemed bored reading his own words. Listening to someone earnestly telling you a story about how they repeatedly misrepresented the truth while appearing earnest makes you pause, listen and consider. The book is all the better for this and represents a step up from the mondane.

Story had some interesting insights (eg around Wiggins in 2009) but wish JV had got someone else to narrate.

I enjoyed this book. The author lived through tumultuous time in cycling and has produced a brutally honest and rigorous self assessment.

interesting insight to the inner workings

really really well told story to get an insight into the inner workings of professional cycling and what people gave up/risked to become a professional and then through the dark years and through to the other side of managing a team and trying to clean up the sport.

having listened to other books from other professional cyclists it's always interesting to hear a different perspective such as the way Bradley Wiggins said he treated the team as opposed to what Jonathan experienced.

Warts and all evisceration of sports sponsorship

Open an honest account of the darkest days of procycling and why sponsorship forces performance enhancement for success from a former pro.
I have an aspergers son so while there is sometimes a little bullshit, they cannot lie to save themselves so I can guarantee this is legit.

Great perspective from a unique character

JVs story from 'that' era and his post retirement battles in cycling. Enjoyed his perspective and journey through the Lance era and what pro team directors go through, tough gig. well worth a listen.

It was funny that he often sounded like it was a lot of effort to be bothered narrating the book, glad it was him though

loved every minute, finally getting the truth about all the doping in the cycling world.

Raw and truthful look inside the dark days of cycling.

Very interesting and raw look into the sport.

I found this a very honest and raw look into a dark time. Well worth the credit.

I really enjoyed this book and hope he tells more of his story in the future.