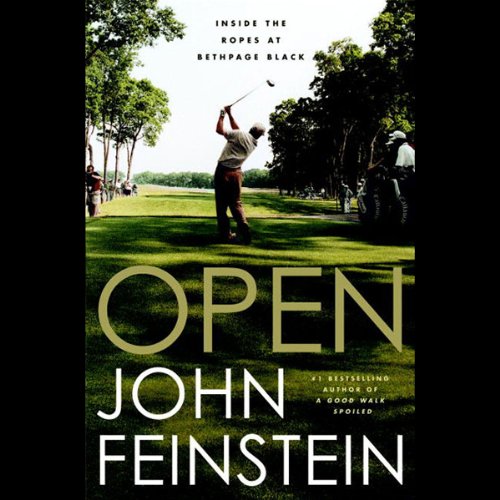 Tiger Woods has called the U.S. Open "the most difficult national championship." With Open, John Feinstein goes behind the scenes to tell for the first time the full story of how the 2002 U.S. Open Championship came into being - how a public course was transformed into one of the most difficult and surprising in the tournament's history, and how the greatest golfers in the world rose to its almost insurmountable challenges.

The 2002 U.S. Open at Bethpage Black, in Bethpage, New York, was the first time in history that golf's greatest championship has been help at a true public golf course. Open is the full drama of that championship, from the moment that officials first considered holding it there until the last putt rolled in at dusk on Sunday. Along the way John Feinstein reveals the full glory of golf as it's never been explored before. He digs deep to find out what it really takes to make golf's most famous event worthy of the champions who compete in it. He tells the remarkable story of the artisans who transformed the Black from a downtrodden and rough-around-the-edges public course to one that top pros hailed as "unbelievable" and "the toughest par-70 I've ever played in my life." He also tracks the drama of the masters who battled for the supremacy at the Black - Tiger Woods, Sergio Garcia, Nick Faldo, Phil Mickelson, Jeff Maggert - to show how true champions respond to the toughest conditions.

John Feinstein is a very smart sportswriter, with keen insigths into many issues. And he has an interesting, engaging voice. But I'm sorry to say that, in my opinion, this book was simply terrible.
It sounds like an official history coffeetable book written by a PR hack. Hundreds of people come and go through the book, but there is no drama and few interesting characters.

Just skip to the end.

I could not follow this book. Its just a mess of meetings and people coming in and out of the story. If you are looking for a good golf book get "Whos Your Caddy" instead.

I have read some of his other books and many other golf books, this doesn't have much punch to it. It's more like listening in on a typical business meeting..."then we scheduled a meeting with the head of this group"...