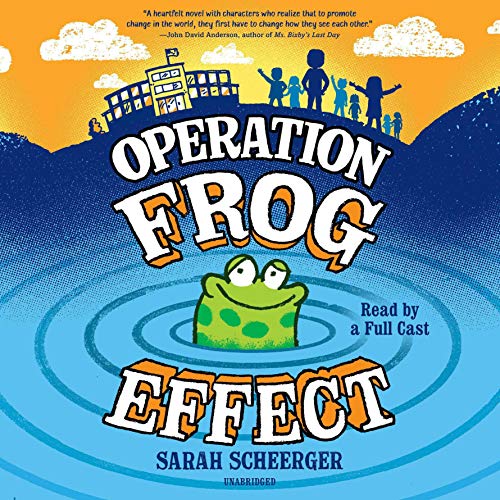 If one small act can create a ripple across the universe...what happens when a whole group of kids joins together and acts?

Told in eight perspectives, Operation Frog Effect is perfect for fans of Andrew Clements, Rob Buyea, and Sarah Weeks, and for anyone who wants to make a difference.

It's us, Ms. Graham's class. We didn't mean to mess things up. But we did. We took things too far, and now Ms. Graham is in trouble - for something we did. We made a mistake. The question is, can we fix it? Ms. Graham taught us that we get to choose the kind of people we want to be and that a single act can create ripples. So get ready, world - we're about to make some ripples.

Everyone makes mistakes. But what happens when your mistake hurts someone else? Told in eight perspectives, Operation Frog Effect celebrates standing up and standing together and tells the unforgettable story of how eight very different kids take responsibility for their actions and unite for a cause they all believe in.

"A heartfelt novel with complex characters who realize that to promote change in the world, they first have to change how they see each other." (John David Anderson, author of Ms. Bixby's Last Day)

Bahni Turpin as the narrator/Ms. Graham

Includes original text from the novel adapted for audio, and exclusive closing commentary from the author

This was a great story that was told through the eyes of different students. Each had his or her own perspective that moved the story along in a really entertaining and, ultimately, touching way.

This is a very moving book!

This book had me so enthralled when I purchased the audio book that I went ahead and ordered the hard copy so I could follow along and see the drawings.
It is the best middle school book that I have read.