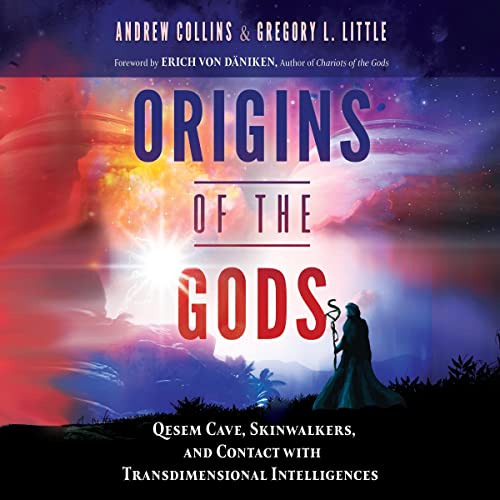 Origins of the Gods

• Shows how the earliest forms of shamanism began at sites like Qesem Cave in Israel more than 400,000 years ago

From Göbekli Tepe in Turkey to the Egyptian pyramids, from the stone circles of Europe to the mound complexes of the Americas, Andrew Collins and Gregory L. Little show how, again and again, our ancestors built permanent sites of ceremonial activity where geomagnetic and gravitational anomalies have been recorded. They investigate how the earliest forms of animism and shamanism began at sites like the Denisova Cave in the Altai Mountains of Siberia and Qesem Cave in Israel more than 400,000 years ago. They explain how shamanic rituals and altered states of consciousness combine with the natural forces of the Earth to create portals for contact with otherworldly realms—in other words, the gods of our ancestors were the result of an interaction between human consciousness and transdimensional intelligence.

The authors show how the spiritual and shamanic beliefs of more than 100 Native American tribes align with their theory, and they reveal how some of these shamanic transdimensional portals are still active, sharing vivid examples from Skinwalker Ranch in Utah and Bempton in Northern England.

Ultimately, Collins and Little show how our modern disconnection from nature and lack of a fully visible night sky makes the manifestations from these ultraterrestrial intelligences seem random. If we can restore our spiritual connections, perhaps we can once again communicate with the higher dimensional beings who triggered the advancements of our earliest ancestors.

What listeners say about Origins of the Gods

Quite an interesting point of view accompanied by ancient as well as recent scientific knowledge. I share the authors’ opinions that we have yet to explore so much of what is right in front (the now), beside (the ocean), around us (the other dimension(s)) and most certainly what is in us. Though as that what is in us is so entirely subjective to one’s own feelings and experiences only communicable via very often inadequate use of media such as language/words/utterances it will remain a long and arduous adventure… and yet a fun ride!

narrator is one of the best ,have bought several books with m Hanks. all books with him shall be a delight when you like subject matter

Well worth a read

The performance was good.(With a serious tone to the subject matter and easy to follow along with. The story itself is along the lines of Graham Hancocks works. I learned a lot of new ideas and concepts that I was not aware of. I especially appreciate the respect and reverence paid to the Native American people. A good book and a recommendation to anyone familiar with this genre.

At last!!! A true examination of everything we thought we knew and a deep understanding of what our reality actually is,
Pure awesomeness and incredibly beautiful 🖤

A big fan of these books.


Alien hunters using the past as proof of existence today. By taking small parts of different known religious / spiritual beliefs and knowledge, we get answers and a singular connection. Like Carlos Castaneda did to create his answers, a little of this and a little of that all wrapped up with a historical story. I love it! Don’t believe a word of it. Do believe that amongst the real information and facts found in these types of books there is a story to learn from. For the Ying to this Yang, read / watch Sadhguru, although Mr Collins is by far a more exciting ride and by using other authors as reference, you get a bigger library.
In the beginning I thought Mr Collins and his circle of friends were attempting to start some sort of “New Coven” locally to me, however, I now think he seems to be trying to write a rule book for a new world cult, using the past to prove the future and mythical explanations to explain science. Keep them coming.