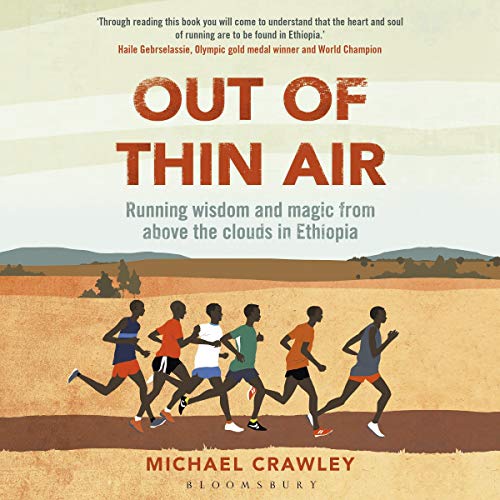 Bloomsbury presents Out of Thin Air by Michael Crawley, read by Raj Ghatak.

Ethiopia is a place where I have been told that energy is controlled by angels and demons and where witchdoctors can help you to acquire another runner’s power. It is a place where an anonymous runner in the forest told me, miming an imaginary scoreboard and with a completely straight face, that he had dreamt that he would run 10km in 25 minutes. It is a place where they tell me that the air at Mount Entoto will transform me into a 2.08 marathon runner. It is a place, in short, of wisdom and magic, where dreaming is still very much alive.

Why does it make sense to Ethiopian runners to get up at three a.m. to run up and down a hill? Who would choose to train on almost impossibly steep and rocky terrain, in hyena territory? And how come Ethiopian men hold six of the top 10 fastest marathon times ever?

Michael Crawley spent 15 months in Ethiopia training alongside (and sometimes a fair way behind) runners at all levels of the sport, from night watchmen hoping to change their lives to world-class marathon runners, in order to answer these questions. Follow him into the forest as he attempts to keep up and get to the heart of their success.

"Through reading this book you will come to understand that the heart and soul of running are to be found in Ethiopia." (Haile Gebrselassie)

"Full of wonderful insights and lessons from a world where the ability to run is viewed as something almost mysterious and magical." (Adharanand Finn, author of Running with the Kenyans)

"A deep dive into the rich and complex culture that produces some of the best runners the world has ever seen." (Alex Hutchinson, author of Endure)

What listeners say about Out of Thin Air

Thie book offers a fascinating insight into Ethiopian running culture and performance. I had always assumed that Ethiopian success could be attributed to similar factors as those used to explain Kenyan running success, yet this book highlights that while there are similarities, there are also key differences. The depth of insight and nuanced perspective offered on Ethiopian running culture is really intriguing, and I loved the way the author is able to capture the voices and perspectives of Ethipioan runners in the text.

The things I found particularly fascinating about Ethiopian running culture: (1) Running is an occupation in Ethiopia; (2) Ethiopian runners place great emphasis on where they run and they draw energy from their surroundings; (3) Running on different surfaces is part of a runners development and each different surface serves a specific purpose; (4) Running is a social activity, very few serious runners ever run alone and they run in single file, or two abreast, following a leader; (5) Serious runners make careful choices about when to use a GPS and when not to; (6) They almost always use time as a key guide for how long to run (not distance).

If you enjoyed Adharanand Finn's books ("Running with the Kenyans", "The Way of the Runner") or Chris McDougall's "Born to Run" then you will really enjoy this book. It is highly recommended!!!

Great audiobook to listen to while cruising....

... through some long runs or short ones. Very entertaining and eye opening in equal measure

Feel part of the running journey of many aspiring and subsequent successful runners. Inspiring and enjoyable.

Key takeaways from this book relate to why Ethiopians have dominated races from 10000m and up for so long - culture, training, lifestyle, and systems.

The author explores all these elements through the discipline of ethnography and must be one of the only anthropologists able to do fieldwork at this level since he is a 2.20 marathon runner.

Great insight at the pointy end of running and engaging cultural commentary. just a shame the narrator's performance showed a complete lack of understanding running when describing the technical aspects.

Good overall,times read with apparent lack of understanding what they equated to.excellent insight to Ethiopia

Gives a very interesting look at a culture very different to the west. Some surprisingly funny moments.

One of the best running books I've read, and I've read a lot.
Fascinating insight into Ethiopian running culture with a personalised and character driven approach. The narration is outstanding.