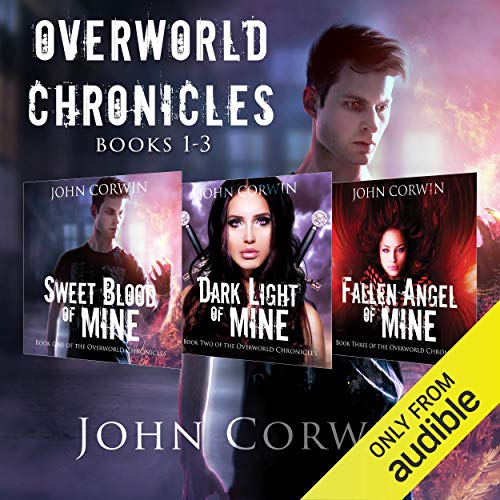 Hundreds of thousands of copies sold. Lightning-paced supernatural action. Readers describe it as "the most original supernatural series in ages".

Atlanta is ground zero for a supernatural invasion. Enter Justin Case, a snarky nerd with all the sex appeal and heroic potential of a potato. That is until he comes into his demonic powers and finds out everybody hates demon spawn. The problem? He might be the last hope for uniting the Overworld and saving us all.

Sweet Blood of Mine

The origin story that started it all. Justin finds out there's a lot more to life than live-action role playing and a pursuit of nerdly adventures. Vampires, felycans, lycans, sorcerers, and Templars all exist. The problem is, Justin isn't one of them. He's something else. Something terrible. And the girl he falls in love with may be sworn to kill him.

Dark Light of Mine

Hellhounds and demon spawn are out for blood. Justin's father is marked for death.

Justin and Elyssa have to track down the mysterious person behind it all before it's too late.

Fallen Angel of Mine

During an escape from the gray men, Justin and Elyssa are stranded in Thunder Rock with a notorious Daemas, Kassallandra. They find a way out, but Justin is separated, thrown through a broken Obsidian Arch, and ends up in Colombia where he'll face his greatest challenge yet.

Meanwhile, Elyssa is captured by her father. He hates Daemos and hates Justin and wants to put her through a ritual that will erase all memories of Justin.

The concept is good...

I really like the concept of this series and I enjoy reading teen books from time to time but there are a couple things that made me rate this below a 4. The narrator does a good job overall but slips on pronunciation occasionally which is a bit distracting. Some of his female voices are a bit odd too. Lastly, the teen romance aspects of the book are a bit overdone. That said it is a pretty good series with interesting ideas.

Barely worth the credit I used

It was a very long struggle to get through this book. Don't get me wrong there were a few redeeming parts. Here's a fee things that bothered me.
1.The MC is supposed to be a fat nerdy kid, yet he only ways 107lbs and doesn't know anything about fantasy creatures even though in the first part of book 1 he mentions playing a DnD type game.
2. MC's personality shifts constantly and is kind of a dumbass.
3. MC's love interest, this super deadly Templar chick is basically useless. She's either always being knocked out, kidnapped, or just there.
4. Kinda same as 3, but alot of the supporting characters are just place holders. His father for example is just blandness personified and just sits around as his son handles everything for him.
5.the dialogue. Oh God, the dialogue. It's just terrible. There was even a "yuh huh" "nuh uh!" moment.
6. The MCs abilities are kinda lame. Sometimes he has super strength but other times he's too tired to do anything.
The world seemed kinda interesting but it felt like the author was just tossing crap in as he went, so things got jumbled.
All in all, if you have a credit burning in your pocket, give it a try. But don't say I didn't warn you

I almost quit before it got better

Whew.
Where to begin?

Let's start with the audiobook narrator. Austin Rising did a great job here. He has an impressive facility with both voices and accents, with even his female voices being very good. His vocal inflections were largely spot on, and his tempo shifts were subtle but effective.

Okay, story.
First, let me just say that based on the first book in this 3-book set alone, I almost stopped reading. The main reasons being, 1) the over-emphasis on sexuality and eroticism was extremely annoying. It is central to the identity of at least one character, but it could have been accomplished in a way that didn't make me feel like I was reading the fan-fic of a hormonally charged 12-year-old. 2) Justin comes off as a total creep. 3) Much of the humor is super-juvenile. Like what I would expect to see in a middle grade book. 4) The "romance" between Justin and Elyssa is completely unbelievable. Having finished these three books, I'm convinced that it's not real. I believe his special abilities are unconsciously manipulating her emotions and that he doesn't have any idea what real love is.

Now, all that being said, after the first book it gets exponentially better in regard to everything except the supposed romance. The story gets better, and deeper, and less dependent on sexuality as it goes on.

The character building is surprisingly good. Justin's first person narration keeps things interesting, but I still don't like him as a person or as a character. It's the supporting characters that carry the story for me. Ryland, whom you meet in book two, is probably my favorite character. He's fun and stubborn and self-contradictory in all the right ways to make him believable and interesting.

In spite of almost quitting and getting a refund after the first book, I will almost certainly be continuing this series as things are now heating up and getting really interesting. I'm quite anxious to see where it's all going to go.

I bought this because it sounded good and was a good deal. I couldn't put it down listened to the whole thing in 2 days. the narrator was excellent use of different tones and accents to capture personality. overall a good buy and I would recommend to anyone.

The journey is not memorable at this point, but it's a fun bit of listening. I did buy the next three books in the series because I hope to see growth in the author as well as the main character.

The narrator was awesome.

I just wish the MC was a stronger character.

I am so hooked on this series! The author does an exceptional job with character development and his use of descriptive language paints vivid pictures in the mind’s eye of the reader. I especially like how we see vampires & werewolves as well as some new creatures that have come strait out of the author’s wild imagination.

A friend recommended this series to me. Halfway through the second book I told my buddy man thank you. I loved this series and cant wait to see where this goes. Urban fantasy and vampires and magic and all has been done before but the world that Mr Corwin has created is well developed and thought out, I like the different approach, what with the main character starting out as a nerdy gamer, then comeing into his power but keeping the nerdy smartass comments and train of thought. This series is a good one and I highly recommend you give it a try.

wonderful story line can't wait to start the next book. captures your attention from the beginning and holds it

Narration and characterisation are amazing. The story kept my attention all the way through.

i purchased this book solely on it been on offer, but i am so glad i did!!

the first book in this trio i thoroughly enjoyed, its not perfect, but it's a great listen! i felt and i guess, "understood" the main characters and i was, undoubtedly hooked! i like this style of book, and if i'm been completely honest I've been looking for something to fill the void that "the Iron Druid" books have left me with!

the second book, well there is no nice way to put this, fell kinda flat on its face to my taste! i was very disappointed, its nowhere near as good as the first book, and does feel very much like a book to tie others together and although introduced some great new characters, could have possibly been a 0.5 book, but.......

...stick with it because book 3, the story really starts to gain traction and develop! (no spoilers here) its a good listen, and very much worth listening through. yes its plenty cheesy, but i'm OK with that so yes i am enjoying the series very much. in fact when I've finished writing this brief review, i'm going to download the next 3 or 4 books in the series.

Buy if you 1) are still an adolescent, or 2) if you love to roll your eyes. The series is self-indulgent teen fantasy. Could have been a great sci-fi story, but it as such heavy doses of “eye-rolling” romantic immaturity...

On principle, I try to finish every book or audiobook I start. I couldn’t finish this.