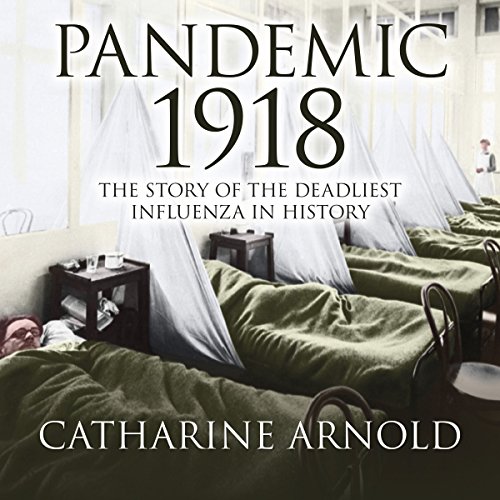 The Story of the Deadliest Influenza in History
Written by: Catharine Arnold
Narrated by: Peter Wickham
Length: 9 hrs and 24 mins
Categories: History

In the dying months of World War I, Spanish flu suddenly overwhelmed the world, killing between 50 and 100 million people. Nowhere escaped this common enemy: in Britain, 250,000 people died, and in the United States it was 750,000, while European deaths reached over two million.

The numbers are staggering. And yet at the time, news of the danger was suppressed for fear of impacting wartime morale. Behind the numbers are human lives, stories of those who suffered and fought it - in the hospitals and laboratories.

Published 100 years after the most devastating pandemic in world history, Pandemic 1918 uses previously unpublished records, memoirs, diaries and government publications to uncover the human story of 1918.

Had to return it

I'm reading this book and enjoying it so I thought the audio narration would be good
The narrator was awful why have a male narrator for a book written by a woman? and a very pompous sounding man at that
I to send it back as I couldn't take any more