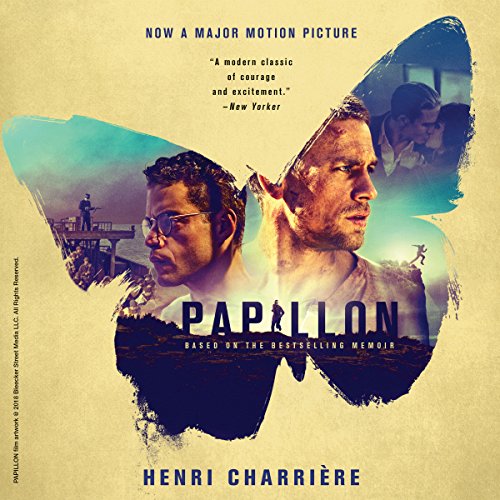 Henri Charriere, called "Papillon" for the butterfly tattoo on his chest, was convicted in Paris in 1931 of a murder he did not commit. Sentenced to life imprisonment in the penal colony of French Guiana, he became obsessed with one goal: escape. After planning and executing a series of treacherous yet failed attempts over many years, he was eventually sent to the notorious prison Devil's Island, a place from which no one had ever escaped - until Papillon. His flight to freedom remains one of the most incredible feats of human cunning, will, and endurance ever undertaken.

Papillon, Charriere's astonishing autobiography, was published in France to instant acclaim in 1968, more than 20 years after his final escape. Since then, it has become a treasured classic - the gripping, shocking, ultimately uplifting odyssey of an innocent man who would not be defeated.

What listeners say about Papillon

Grit and a yearning to be free.

Loved the narrators rendering of this epic story. The narration is captivating , just like the story.

excellent narrative and narration love it

A must read, if human nature matters to you!

It's been a while for me since I last find a precious gem like this book. After reading a few good books from Blaisse Pascal, Alexandre Dumas, other stories become pale. I bought the book after some hearty recommendation, which I hope so much to be able to spread it further. Reading this book I realized that human drama when real would never fail to touch. The author has a rather simple style of telling things. On the other hand, he's observation must have been exceptional, making it possible for him to bring out tiny but psychologically penetrating details.
More than once while listing to the book, I had to stop. The emotion it conveyed overwhelmed me. It forced me to slow down and ponder. I resume the listening once I get over it. Surely the life of Papillion must have been full of pain, physical and emotional kinds; even though his story is filled with love and kindness. There were fewer words on the suffering compared to the human experience Papillion wanted to share with the reader. His survival must have a lot to do with this nature in him. The civilized French society failed him in a brutal way, yet he had not failed in embracing the kindness in human nature.
What more can be said about the power of a story, if it succeeds in making me feel this way given that I watched the movie and fully know the story upfront? Indeed, there's no recommendation that could do this book justice. Find it out for yourself!

Although this is an autobiography, it reads like a novel. I loved reading this book. But once again it highlights the fact that humans can be the most vicious and mean species on the face of the earth. Papillon was not perfect, in fact he did some pretty bad things, but he did not commit the murder he was accused of, and for which he was sent to prison for life. Not just prison, but hard labor, with long stretches of solitary confinement in which he could talk to no one, ask for nothing, and never even see the sun. Papillon tried to escape 10 times and was totally successful the first time. If he hadn't decided he wanted to live somewhere else, he would never have been found and been reimprisoned. I remember seeing the movie with Steve McQueen years ago, and now I want to see it again.

More than anything else, this book taught me to never give up no matter how bleak the outlook. Some days I really need to remember that lesson.

I was a little "if-y" about Michael Prichard as a narrator at first, but I came to realize that his style and vocal characteristics are perfect for this story. Highly recommended.

Would you consider the audio edition of Papillon to be better than the print version?

That it is true, that it tells of a time before I was born, of places where I've never been, of a lifestyle that is not my own.

Wasn't overly fond of the performance. See notes below.

I read this book years ago, I probably saw the movie, too, and in listening to it this time, I believe I've listened to it before. Nevertheless, it remains a well-liked book in my mind. Listening to it this time, I note to myself that the narrators for recorded books have really upped their game in recent years. According to an internet search, it seems the audio version was released in 2012. In recent books I've listened to, the narrator uses a variety of voices for characters. Not so with Michael Prichard. The story, written in the voice of Henri Charriere (Papillon), relates the conversations of a number of people, but the voice is always the voice of Papillon. Written as a memoir, I suppose that makes sense, but using different voices would have certainly enhanced the telling.Set during the early years of the 20th century, before and during WWI, Charriere tells of his imprisonment in a French prison, his multiple attempts of escape and his reimprisonment, his remarkable friendships with the many with whom he was imprisoned, and his eventual landing in Venezuela where he found his new home as a free man.

I searched especially for this book when I realized that it really is a true story. Imagine my pleasure and surprise to discover that Michael Prichard is the reader!!! I have 'read' another of 'his' books, the story of Richard Kuklinski, Iceman, and I thought he was the perfect reader for that book.

And now I like the guy even more. Michael's voice brings both of these books to life. I'm gonna have to give another search for books read by him. For me, the reader makes the book. I have another book that I read years ago and can't stand the reader to the point where I can't listen to it. So I'm making it a habit to search for my favorite readers.

And the book ain't bad either.

The First Escaped Con that Everyone LOVES?

This is a good story. It's translated, so at times the English can be a bit all over the place. There was only one real issue I had, and it's a big one... EVERYONE wanted to be this guy's friend. I don't mean everyone INSIDE prison; actually, that's where the only real tension (best action) takes place. I mean, when this guy escapes, he tells everyone he meets that he's a DANGEROUS escaped convict, and EVERYONE bends over backwards to help him!!

"Here, take my food that I was going to feed my family with!"

"Here, take my only boat, that I use for fishing, to feed my family!!"

It may sound like I'm kidding, but trust me, I'm not. It got to be ridiculous. He didn't have to threaten people on the outside, they were just unbelievably eager to help him in any way possible. I don't know if it's just the age we're living in, but I'd venture a guess that around 5% of people would willingly assist a person that approached them and said "Hello, I'm a dangerous escaped con. How's your day going?" Most people would run and/or call the police. In this book, literally 100% of the non-police people he comes across want to help him, and even risk their own lives to do so!

I wanted so badly to like this book, but it is just so unbelievable, I found myself laughing and shaking my head at parts that were clearly not meant to be funny. It's a shame, because there aren't many books out there about escaped cons that have escaped multiple times.

Narrator is excellent. Translation is ok, not great.

Amazing from the Get-Go!

While some aspects of this autobiographical novel have been embellished, Henri Charriere’s intelligence and eloquence is not. There are articles that say there are no records of him being in the Diable prison, it is a small, invented aspect to a rather adventurous journey.

From the opening paragraphs I was enthralled by the dramatic narration of his trial and the start of his prison sentences. Even more amazing is the interaction he had with Indians who took him in after his first escape and how he threw that life away as if he inspected a freshly fallen apple saying “No good,” and tossed it to the side.

Papillion’s intelligence is checked at that point, but it is shown again in the deals that he made with fellow prisoners, guards, and wardens. Granted, as an autobiography, some of these aspects could’ve been written to give us a better view of Charriere, but you find yourself rooting for him nonetheless.

Michael Prichard was a great narrator, but didn’t distinguish various voices (whether male or female), so it was sometimes difficult to understand who was speaking when a conversation involving more than two people took place. Aside from that, he did a wonderful job.

I love this book I never wanted it to end . I'm sure I will listen to it again someday soon !!

The most amazing book I have ever read!

I would recommend this book to anyone! The story of Papillon is so captivating from the beginning all the way to the end. I plan to listen to this book at least two more times because it is such a great book! Also the narrator did a great job of performing the story. I can’t say enough how much I love this book!

Great overall. Better than movie. Hard to put down. It's a classic. Performance was the best I've heard.

This is a fantastic book! Just remember that it is from a different time and a different "world" from our own. Henri takes you through a journey as he experiences it. Thank God most of us will never have comparable experiences! Many elements of humanity and inhumanity fill the pages and introduce modern readers to a life that was rarely written about in its day. I first read Papillion almost twenty years ago and some of the imagery and conflict still surfaces from time to time in my thoughts. A very impactful book!

I absolutely loved this book, I read it in one continuous go, absolutely addicting.
An amazing thrilling adventure that takes you on a rollercoaster ride of emotion, 10/10

I read the book about 15 years ago and at the time I was captivated. I enjoyed the audiobook second time round just to recall all the adventures.

Would highly recommend to anyone looking for a good adventure book.

One of the very best books I have listened to having previously watched both films of the same name and read the hardback book many years ago.This unabridged version is fascinating highlighting Papillons struggle to be free. Superbly performed by Michael Pritchard.