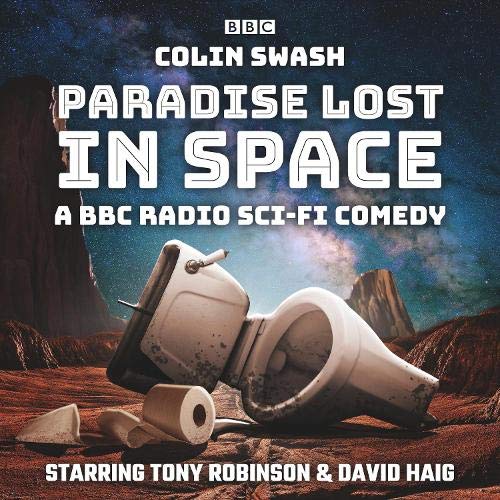 Tony Robinson and David Haig star in this black-hole comedy about two space-age humans stranded on a friendly alien planet.

Norman is an idealistic, Beethoven-loving revolutionary. Max is a boring but cheerful timeshare salesman who won't stop talking. Fellow passengers on a flight to the Moon, they're thrown together to become reluctant companions after the lunar shuttle's toilet cubicle explodes, crash-landing them both on the desert sands of a distant alien planet.

They are rescued by the friendly Oblivions, who could not be more delighted to see them. Having spent six years learning English from a discarded volume of Noël Coward plays, they're keen to practise the lingo - and learn more about the many mysteries that have baffled them. How do you mix a Martini? How does one play tennis? And what on Earth is misery?

Norman and Max are about to answer all their questions - as well as introducing them to fire, contemplation and baked potatoes. But their well-intentioned attempts to share the secrets of racquet-based games and sophisticated cocktails soon backfire. Perhaps providing the Oblivions with the priceless gifts of human civilisation wasn't such a good idea after all....

Written by Colin Swash, whose numerous TV credits include Have I Got News for You and Mock the Week, this sci-fi sitcom stars Tony Robinson as Max and David Haig as Norman. Among the co-stars are Geoffrey McGivern and Lorelei King (The Hitchhikers' Guide to the Galaxy), and guest stars include Alistair McGowan, Peter Serafinowicz and Ronni Ancona.

What listeners say about Paradise Lost in Space

Not Funny and Too Dark

This was a promising premise and had some very funny moments at first. But then it couldn’t decide if it was going to be a comedy or some really dark allegory, and the mixture of the two really just didn’t work. I like dark comedy, but this isn’t that. This is just weird and bizarre and slightly unsettling and not funny. I couldn’t believe the ending. Started out funny, ended up as existentially angsty trash.

Radio 4 comedy at its worst

Dismal stuff - a daft premise, a painfully slow plot, flat characters, and jokes too feeble to deserve the name. Save your credits and buy, well, anything else.

The folly of man and how to laugh at it

A show full of laughs at how even simple things we as humans do can have great impact on those who do t understand.
Both Tony Robinson and David Haig are great as two humans who couldn’t be more different ultimately bungle their way through trying to civilise an alien race.

The only thing I didn’t like was the ending. Not wanting to spoil it but I felt it was too dark for how the rest of the show was and the tonal change felt off. But otherwise it’s a great few hours of laughs and insight into who should go to other worlds and exactly what we should introduce.

Loved it so much on Radio4 extra that I just had to get the audiobook. Very funny story that deals with how humanity can muck up things wherever we go.