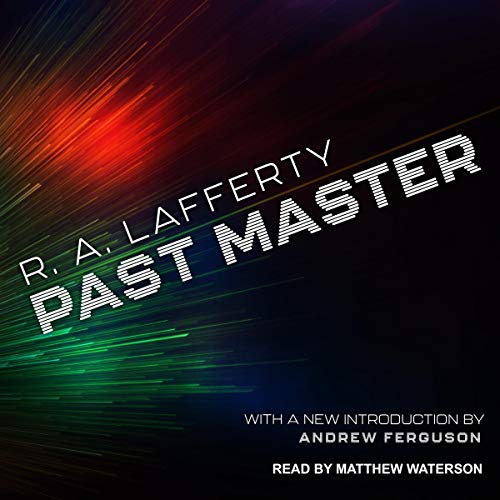 Wolf Hall meets The Man in the High Castle in this mind-bending science fiction classic.

Plucked from time, Sir Thomas More arrives on the human colony of Astrobe in the year AD 2535, where there is trouble in utopia: Can he and his motley followers save this golden world from the Programmed Persons and the soulless perfection they have engineered? The survival of faith itself is at stake in this thrilling, uncategorizable, wildly inventive first novel - but the adventure is more than one of ideas. As astonishingly as Philip K. Dick and other visionaries of the 1960s new wave, Lafferty turns the conventions of space-opera science fiction upside down and inside out. Here are fractured allegories, tales within tales, twinkle-in-the-eye surprises, fantastic byways, and alien subjectivities that take one's breath away. Neil Gaiman has described Lafferty as "a genius, an oddball, a madman"; Gene Wolfe calls him "our most original writer". Past Master, long-hailed by insiders and now with an introduction by Andrew Ferguson, deserves to perplex and delight a wider audience.

What listeners say about Past Master

I want a big fan of this story. I kept getting lost in the prose. it was hard to follow and very difficult to listen to while driving (which is when I audible). that said, RA Lafferty is a great author. I would love it if some of his shirt stories made it to audible.

Waterson is an excellent reader! He seems to get the nuances of the story.

This is a very interesting exploration of utopia and Sir Thomas More pushed into the future. I actually really enjoyed much of the dialogue and his imagination of space travel and the way things might be with artificial intelligence in the future is really something.


Honestly, I am a bit of a simpleton when it comes to sci-fi. But if you enjoy some of the humor related to how things might work in a world where space travel was more normal and artificial intelligence was par for the course, this has almost a 70's Star Wars type feel. The juxtaposition with 16th century England and a man who is relatively fearless in the face of new ideas (including space travel) was well played. This is enjoyable and definitely makes you think about where things could go in the future.

Maybe I need more action; this often went slow as new characters were introduced, many of whom were boring. Was it supposed to have a political message? Maybe so, but from 50+ years ago. I won't re-read. I'm grateful to Audible for making it free.

Do you love fiction? Do you love deep thought? Do you wonder at the World? Why have you never heard of RA Lafferty?

'no prophet is accepted in his home town'