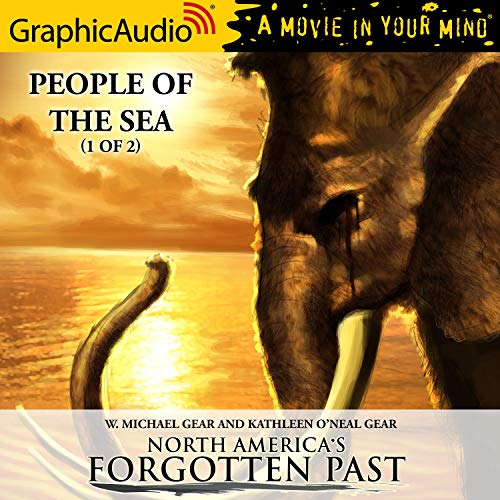 The glaciers of the Sierra Nevada are melting, destroying the habitat of the mastodons, creating the rich land that will become California. The coastal people struggle to understand the changing world around them: their seer Sunchaser has lost his way to the Spirit World and mammoths continue to disappear. When a beautiful woman arrives, fleeing from her abusive husband, the people know what they must do - for if the Spirits are already taking the animals away, what will happen if they shelter a stranger? Now Sunchaser must make a choice - between the woman he loves and the preservation of his people's world.

I have listened to at least 6 of Kathleen and Michael Gear's audio books and I really loved them all. This might be a good story but the narration "graphic novel style" is so distracting its annoying. I also feel gipped as note that part 1 and 2 are separate purchases and each about 7 hours long. If you haven't read/listened to any of their books before, listen to "Coming of the storm" Book one of Contact: the battle for America.... thats my favorite series. Hope they don't record any more books like this..not fun.

I guess I prefer straight forward reading over graphic novels. To me they have too much garbage in the background that distracts me from the story.
Although as always, I like the writing of the Gears, so I'm holding on to that and finishing this novel. I hope other books of the series continue to come out as standard audio books like the People of the Wolf.
PLEASE!

If you have nothing else to do...

It was OK. A couple of the character voices were very annoying, but the pace and performance of the narrators were excellent.
I am a voracious Ancient Fiction reader and find most of them riveting
However, this story I hung in there, only waiting for it to come to some sort of climax, then 'poof', it was over.
It said book #1 of 2, but I'm not even looking for #2.

Enjoyed envisioning the life and experiences of this ancient civilization. The author wrote in a fashion where I felt I could see this story. As well as hear it unfold. The production and sounds brought it all to life