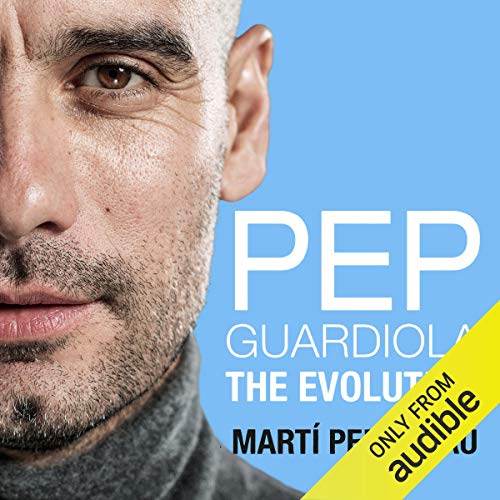 For three extraordinary seasons at Bayern Munich, Marti Perarnau was given total access around the German super club - to its players, its backroom staff, its board members and, above all, its manager, Pep Guardiola. In the follow-up to his critically acclaimed account of Guardiola's first full season at Bayern, Pep Confidential, Perarnau now lifts the lid on the Catalan's whole tenure in Bavaria.

Pep Guardiola: The Evolution takes the listener on a journey through three action-packed seasons as Bayern smashed domestic records yet struggled to emulate that dominance in Europe, analysing Guardiola's management style through key moments on and off the field. Perarnau reveals how Guardiola improved as a manager at Bayern despite failing to land the ultimate prize in European football, examines his decision to leave Germany to take up the challenge at Manchester City and how his managerial style will continue to evolve in the Premier League.

This is more than the story of three seasons with one of the biggest clubs in the game. It is a portrait and analysis of a manager and the footballing philosophies that have beguiled the world.

What listeners say about Pep Guardiola

If you think you understand football, management, professional sports you'll be blown away regardless. This book beautiful illustrates what Guardiola and his team's are all about. You want a behind the scenes look, you've got it! You want a look into pre- intra- and/or post-match or training details, you've got it! You want tactics, strategy, systems used by Pep and his men, you're covered. All of this and much more written in a style that keeps you wanting more. I blew threw the book in 3 days thanks to the audible edition and am planning to re read the entire book in print and take notes. Phenomenal! Absolutely, fucking brilliant.

If Guardiola commissioned a book to be written for the sole purpose of puffing him up I would expect that work to be more objective than this. The author willfully misleads the reader by carefully handpicking stats and quotes to ensure that Guardiola is depicted in mythical terms. He claims that Guardiola is not dogmatic, then proceeds to explain how he pouted despite winning because the style of play was hampered by an injured squad. He claims that Bayern Munich represented a monumental challenge, then proceeds to gloss over the fact that he took over the most expensive squad in the country, took his opposition’s best players, and still failed to accomplish what his predecessor had done. The only reason this isn’t a one star review is because it provides interesting access to Guardiola and the locker room, but it is of almost no analytical value as the author seems either completely oblivious, or willfully obtuse about the game. He claimed Guardiola played five strikers (which is functionally impossible and didn’t happen) and that he used a formation that had four full backs (not four players that were full backs, but four full back positions within the formation which is impossible.) it’s nonsense and not worth your time.

Will listen a few more times

Gave Me a New Perspective

I've recently read a book made on one of the best in the world in his Fields. Pep Guardiola, the world's best soccer coach who was brought up by the Catalan Side Barcelona FC.

As I dove into his story I took away several tips that I will work on implementing in my life. For example, Pep Commits to teams for a max time of about 3 years after his departure of Barcelona, He doesn't like to read articles or books written about him because he feels it might change his perspective on certain things about him, and he loves to learn outside the sport.

For starters, Pep is a great inspirational character and he knows that building a team is not just about putting great players, but instead building a great team is about getting world-class players to believe in one vision & philosophy ( Hence why many great individual players were not capable of performing under his direction). He also knows that you have to set a timeline for your actions... He believes that if he doesn't put a date to when he will depart from the club the players or even himself might feel complacent with his presence and they might not have the world-class urgency that is needed to be a great team. Since he sets very demanding time frames he doesn't like to listen to many outsider's opinions.

Considering that Pep is such a public figure in the Soccer world... one might ask, "How does he avoid conversation on the press that describes him" He simply doesn't like to hear it because he doesn't want some else's frame of thoughts to enter his current philosophy. He listens to those close to him and is always asking his coaching staff for advice... It might seem like he's a closed-minded individual but on the contrary, doing this helps him stay creative & that is why he looks outside of the game for inspiration.

Pep loves chess, rugby & art... But what does that have to do with playing soccer? According to the coach, he turns to chess players to help him develop a strategy for his team, he looks to rugby's best teams to help develop culture and unity, and he enjoys art and finds inspiration from it.

I Learned that he likes to meet with professionals outside of soccer in a dinner setting and is always asking many questions to better understand their thought process. Once he picks apart their thoughts & if he feels he can use it to play soccer in a better fashion he brings it to the field and shares it with his players.

My Biggest takeaway is to always be curious and be on the lookout for ways to find inspiration, to think outside the box for strategies, and for us to choose our identity for ourselves.

Really good story, and great speaker. The story is narrated well and you get a really interessting insight into Guardiola but also football in generel.

great book about how one of the best coaches in the world runs his team. I really enjoyed the tactical explanations of why and when he makes changes.

This book will educate you on what inspires Pep to constantly develop his approach of the game. His thirst for knowledge and curiosity are some of his main foundations of success. Great history and tributes to the coaches and playes that have helped to involve the game.

Loved it. I’m an avid football fan and loved the insight to one of the greatest managers of the modern game. 5 stars

This is not from Pep

This is a good book, with great detail, and depth about Pep. Though it is made clear not directly from Pep. I very much so, highly encourage reading anyways. Well done!

I loved the book!

The narrator was great. The information was beyond exceptional. A great book for anyone that coaches any sport with any passion about your craft.

I will definitely listen to the book again.

It’s boring the voice is boring and no insight to pep or the way he plays his brand of footie.

If you don't like it. You don't get it

As a football coach with an overactive mind, working at a professional football club, yet constantly finding myself at odds with the conventional football wisdom, this book helps me to confirm and evolve my ideas so that I'm able to justify why I disagree with things that hundreds of people view as "the way it is done". I have only met one person in football who I believe challenges convention along with me and we talk constantly about our frustrations.

Frankly. If you don't like this book. You don't get it. And you should coach/watch/talk about football with the rest of the sheep

If you’re interested in football coaching, educating, developing, strategising, understanding the individual, understanding the collective, playing your part in the team, then this audible book is for you. It explores things in depth, so it helps if you know the players, the personalities and can visualise what is being discussed. With access to training, meetings and alike, it builds the picture of how plans are conceived, prepared, subtly amended and put in to practice through meticulous coaching, ready to make a match day look effortlessly easy. Listen. Soak it up. Rewind 15 sec because you missed something. Did you? Yes. Listen again. Soak it up. Enjoy!

The writers relationship with Pep is uncomfortable, as it speaks of Pep in a god like figure, when in reality he has coached great teams with unbelievable resources and top professional players who always want to win.

Some great ideas I have to admit, but again alot of fluff and the ideas amount to 2 or 3 chapters, after that it's a waste of time.

Great insight into guardiola's methodology. As good as pep confidential, although a lot less linear

Works well as an audiobook

Loved it. A must read. I like that at the end of each chapter gives you a quote of several very important men in earth

Having difficulty Sleeping? This is the book for U

there are books I would listen to again for the sheer entertainment value or insight, but sadly this isn't one of them...
At times I found myself wishing it would hurry up & end... & if I'd paid more than the £3. for it in the Sale, i would definitely have returned it.
The flitting between joining City & going straight back to a match day at Munich, the author might've thought this kind of writing keeps things interesting, but I think a straight run through of what took place in date order would've worked much better, even though the content wasn't riveting & didn't really grasp your attention for wanting to hear what happened next.
its basically a fly on the wall reporter writing their version of events..... Pep had no desire to read/listen to what was written in this book himself & that was probably the wise choice!

If you are a fan of JdP ! then this is a great book for you, great insights !!

Not as good as I expected

The first book too quiet to listen to whilst cycling. Also, not as detailed as I would have hoped. More of a biography of Pep's reign than anything insightful in regards. Not the worst ten hours of my life mind. it was just ... ok.

It is an interesting book but the narrator sounds robotic and it's distracting from the content.