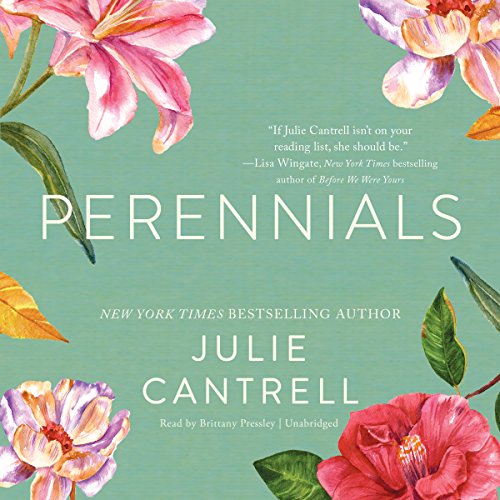 Eva - known to all as Lovey - grew up safe and secure in Oxford, Mississippi, surrounded by a rich literary history and her mother's stunning flower gardens. But a shed fire, and the injuries that it caused, seemed to change everything...especially when her older sister, Bitsy, blamed Lovey for the irreparable damage.

Bitsy became the cheerleader. The homecoming queen. The perfect Southern belle who could do no wrong. All the while, Lovey served as the family scapegoat, always bearing the brunt when Bitsy threw blame her way.

At 18, suffocating in her sister's shadow, Lovey turned down a marriage proposal and fled to Arizona - a place as far from Mississippi as she could find.

In time, she became a successful advertising executive and a weekend yoga instructor, carving a satisfying life for herself, free from Bitsy's vicious lies. But now that she's turning 45, Lovey is feeling more alone than ever and questioning the choices that have led her here.

When she gets a call from her father insisting that she come home three weeks early for her parents' fiftieth anniversary, Lovey is at wits' end. She's about to close the biggest contract of her career, and there's a lot on the line. But despite the risks, her father's words, "family first", draw her right back to the red dirt roads of Mississippi.

Lovey is welcomed home by a secret project - a memory garden her father has planned as an anniversary surprise for her mother. As she helps create this sacred space, Lovey begins to rediscover her roots, learning to live perennially in spite of life's many trials and tragedies.

Years ago, Lovey chose to leave her family and the South far behind. But now that she's returned, she's realizing things at home were not always what they seemed.

For anyone who has ever been lied to, lied about and had to ultimately fend for themselves, this book is for you. If you’re from the south, where “putting on your best face” is expected, this book’s for you. If you’ve never been the cheerleader, whoopee, this book’s for you. If you’ve always valued the truth above the frivolous, stop now and get this book. All you reviewers who complained about the winey main character, lol, gotta believe y’all were the cheerleaders . . . the smiling through the bs, covering up what’s underneath, and nobody’s ever gonna know the truth ones. There is a depth of absolute truth in this novel that will knock your socks off, if you’re not afraid to get past the surface. One of the very best stories of all time, Bitsy (who never really got over having a little sister come on the scene) and Lovey (who grabbed life as she saw it, loved openly and honestly, saying what she thought) were as different as night and day. They were born to two bigger-than-life parents who fiercely loved one another, but maybe didn’t know how to guide and love two very different little girls. One, mean spirited and self-centered. One, serious, thoughtful and self-critical. What Chief and Laurel may have missed seeing in their young daughters’ spirits and behavior when they were little, they more than made up for when they came home for their 50th wedding anniversary, which is where this story takes place. All families are flawed. We all need healing, and most of all, we all need God. What we believe is strength, many times is the worst kind of weakness. Bravo for a wonderful tale of love, healing and family.

While I have read many of Julie Cantrell’s books and enjoyed them for their Christian inspiration I was so disappointed in both in Perennials and Julie Cantrell. This book put an emphasis on new age spirituality: labyrinths, female spiritual leaders etc as sources of peace, wisdom and redemption rather than showing that the One True God, our Father and source of all that is good, in Him alone is found peace, wisdom and redemption. I kept asking myself how could a Christian promote new age spirituality to her readers. I read this book to the end hoping she would have her characters find their way into the heart of God but that never happened. Christian beware if you chose to read this book? Miss Cantrell-why????
What a big disappointment!

Lovely Story of Flowers and Family

As a gardener, I loved this story of flowers, family, friends, and the fears that we all have deep inside.
A book that reminded me that we need to look to the choices we all make it life and how they are not just for us but also how they effect others. Good book and good life lessons.

Flowers, the deep south, and a complicated story

As a flower lover and someone who loves the deep south, this book had me from the start. The story is moving and as someone who recently experienced a deep loss this story really resonated with me. A wonderful, moving story and beautiful performance.

I have bought copies of this book for several friends now! Keep your tissues handy while you read or listen to it! Absolutely wonderful!

Perennials was a walk down memory lane with the trip to Jackson and the Welty home visit. The detailed accounts of the Faulkner grounds, the gardens of the mother’s home, and the meaning of each of the flowers made listening a joy. The accent of the reader was also authenticity performed which is much appreciated. I highly recommend the story!!

I loved it! It hit every emotion, I was laughing, crying even angry. I wish I had a father with the faith and love that Cheif had.

The main character (45 and unmarried but wants to be) is a complete victim. Yeah, she had some bad things happen to her (don't we all) and her sister is a witch with a capital B who for no reason I could figure out wants to destroy her sister's life. And there's the fact that her "lovely" parents always side with the horrible daughter (for no reason I could discern), and while the reason why Bitsy the horrid sister was always trying to bring Lovey down is "explained" near the end, said reason was so very pedestrian. And Lovey just takes it her entire life. She's also a somewhat of a doormat in most areas of her life--even at work where she's very successful.

Then there was the weird religious stuff. "Chief," Lovey's father is constantly telling religious stories or speechifying in general. Everything has to be a lesson. The weird story of Judas, who somehow seems to be the silver lining in sending Jesus off to be crucified is presented to Lovey twice as...some way she's supposed to make up with her sister, who she's been trying to have a decent relationship with her whole life. I didn't get it. Especially when, in one breath he says it's his fault that he never stood up for her but she's supposed to fix her relationship with Bitter Bitsy.

And the mother, syrupy sweet who refused to talk about anything negative or if she did, it had to be turned into a positive thing.

Characters were one-dimensional and men were either evil or angelic.

I read Cantrell's Into the Free and really enjoyed it, but this made my want to grind my teeth.