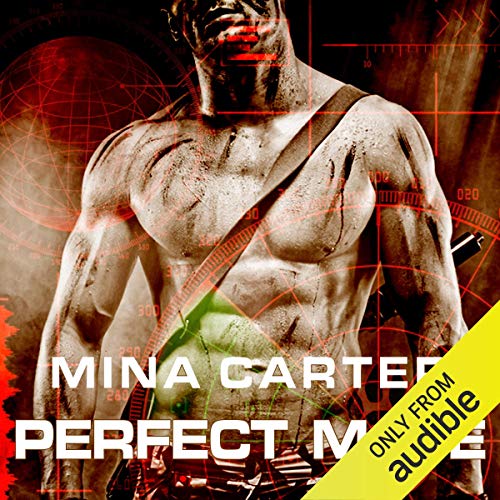 Monsters do exist... and they're the good guys. Lillian Rosewood leads an ordinary, boring life working as the manager of a psychiatric hospital. The highlights of her day, other than her skinny hot chocolate, are the hunky guards who work in the secure section. Until a late-night emergency is wheeled in. Captain Jack Harper is insane, drop-dead gorgeous... and just had his abdomen shredded. Despite the fact they're not an emergency room, Lillian can't turn him away and risk a death on her hands. Unable to get the handsome soldier out of her mind, Lillian sneaks into the restricted area to check on him. What she finds is beyond belief. Somehow Jack has managed to heal himself from a near-fatal wound in mere hours. When one of the doctors, Walker, attempts to rape her, things go from bad to worse. In the blink of an eye, Jack is loose and Walker is dead... and Lillian must accept a truth about her rescuer that will change her world forever. What if the patients aren't insane? What if their stories of secret government experiments and monsters are true?

Warning: Contains blood, mayhem, and nude werewolves operating heavy weaponry. Large amounts of sarcasm and smart-ass vampires may offend some listeners. No civilian hospital staff were harmed in the making of this story.

What listeners say about Perfect Mate

Confused about the previous low ratings

The main character and the narrator. I also liked how the author included Shapeshifters, Vampires, and Zombies (re-animates) created by the government as the main basis.

I took a chance on this, even though it had low ratings. So glad I did. I have no clue why it was rated so low. The narrator was fantastic and I will be looking for more of her books in the future.

This book is a very interesting turn on the myths we think we know. Mix genetic altering with Werewolves, Vampires and Zombies. Throw in some romance and the evil government, bang you have an intriguing new series!

Smutty fans of Mina Carter may be a touch disappointed, there isn't a lot of smexy steam here. This is more geared towards the Urban Fantasy crowd. Loads of story, building characters and fleshing out a fairly detailed plot. I enjoyed all the intrigue and suspense.

Never fear, there is at least one hawt bedroom scene, but it is more than 75% through the book. So, if you are looking for one of her bedroom reads, this isn't going to work for you! The smexy time is great and plenty detailed, it just isn't the whole point of the book.

This is a mixed narrative, mainly between four characters, giving very different points of view. Most of the time we have Lily and Jack, the leads in this book. They have a great dynamic and I love seeing that sweet Lily has a real backbone! The rest of the time we have Darce and Antonia giving their thoughts. Antonia is a great character and you really see more of what is happening in the facility through her eyes.

I have to say in the book, the ladies owned it! They were seriously kickbutt! I love Lily's sassy snarky comments. Antonia isn't as fun but she makes up for it in attitude! The are a serious handful for their men!

I listened to the audiobook narrated by Emily Beresford, who is always a delight. I love her energy throughout the read. She infuses the words with emotion and adds depth to the story. I enjoyed her tone on the men's voices, appreciating that she doesn't take it too far. I hope she stays with the series.

I am beyond thrilled to see this author stepping into audio!! I can not wait for all her books to be released!! I will have some seriously happy ears.

*** If you found this review at all helpful, please take a moment to let me know. I love reading and sharing my opinions with other readers. I listen at double speed, all my impressions of the narration are from that setting. Thanks for taking the time to read my review! You can see more audiobook reviews on my blog Eargasms Audiobook Reviews ***

This stroy mixes paranormal beings with big bad government or pharmaceutial companies (any big impersonal business) that do experiments creating beings such as shifters. A female doctor get involved with a break out when the bad things the oranization was doing was discovered. Of course the lead female falls in love with the alpha leader whom had marked her as "his" mate. Fiighting, drama and vivid descriptions of lusty sex followed. Perhaps there will be a 2nd book but, what happens after the escape and if their "love" will survive due to her being "changed"..

This book was amazing. It didn't have all of sex sence but it made up for it with action. Now I just need the Second book to come available.

This is the fisr book I have read by Mina Carter and I have to say story was conpelling but a little too fast paced.

I have not decided how I feel about this writng style. I have not read book in this style before. The book jumps from our main couple to the blood who I believe will be inmain focus in a next book. In my opinion she was not likable and I woul have rather had more scenes with Lilian and Jack instead of that Antonia... Antonia was quite annoying but i feel thst her character was more well rounded than Lillian.

I am conflicted about how much time is dedicated to Antonia's POV in this book. Jack was interesting but I sm disappointed in the lack that is with Lillians character (which has no development or minimal in this book).

all and all it wasn't the worst book and the world building that this author did was really good. I think I will give another book by this author a try.

Well Written and Great Story-Where's the next one!

This is a really well written story that draws you in right away!
With my hour commute I can't wait till the next one comes out in audible!

Love 💘Audible keep up the great job! Your story was great , the narration is always believiable. I'll be looking for more of the same narrrater

Consistent "valley girl" inflection. Her male voices were awful. Would be better as a read than a listen as the story wasn't bad.

The story is okay but badly written and the multi POV was killing me. the narrator is ok and decent at male voices which is great but sounds a bit too old for the character.

Lillian Rosewood is the hospital admin to her families psychiatric hospital. She has no idea that the government is conducting sadistic tests on humans in one of the wings....until all hell breaks loose.

Captain Jack Harper is wheeled into her hospital despite not being an emergency medical hospital, Lillian can't seem to leave him on deaths door, or stop thinking about him. Lilian sneaks into the restricted area whereby one of the scrupulous doctors attempts to rape her. Lilian learns that Harper, is not just her rescuer but was a soldier exploited by corrupt government officials in a science project and now is in survival mode with her new found knowledge

Oh wow this story had me in its grip from the off.
Shifters, vamps and zombies are being genetically engineered as part of a secret military project and as usual the humans are the ones thinking they are completely in control of the ‘monsters’ they’ve created! Err, think again.
I loved this story and easily became invested in the characters, the narration is good, the writing is great, I wasn’t ready for it to end and really need to grab the next book, I have to see how things play out between Darce and Antonia.

not quite perfect mate by Mina Carter

Original take on werewolf genre. Great sci-fi fantasy backdrop to an exciting and well paced story. Likeable H & h. Spoilt for me by cloying over sentimentality in the dialog, sadly common in romance books, which lost the 5 star rating. Also fated mates thing which is not my preference. Excellent narrator. I will be trying the follow on books despite faults.