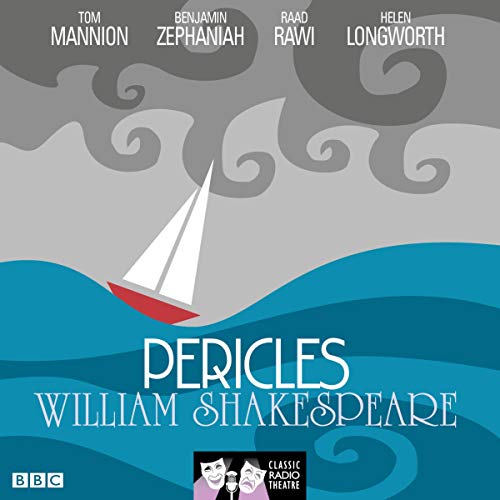 A BBC Radio 3 full-cast dramatisation of Shakespeare’s classic Pericles, starring Tom Mannion. Originally broadcast in November 2005 and repeated as part of the Drama on 3 collection in November 2008.

What listeners say about Pericles (BBC Radio 3: Drama on 3)

This is a competent performance of Pericles that never becomes anything more interesting than that. The actors all seem to know what they're doing, but don't seem especially excited to be doing it.

The text is cut fairly heavily and occasionally rearranged, so avoid this recording if you're an extreme purist.

There is an range of accents on display (Gower is Caribbean, the Tharsians are African, Pericles is Scottish, etc.) which is cool, but some of them take some getting used to.

The sound ambience is a little odd; in some of the scenes the characters sound like they're talking inside tiny little rooms, which doesn't really gel with the play's epic scope.

In summary, it's fine, and - let's face it - recordings of Pericles are hard to find, so beggars can't be choosers.