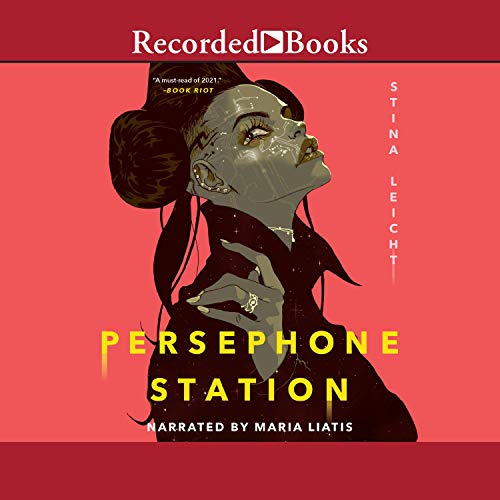 Hugo Award-nominated author Stina Leicht has created a take on space opera for fans of The Mandalorian and Cowboy Bebop in this high-stakes adventure.

Persephone Station, a seemingly backwater planet that has largely been ignored by the United Republic of Worlds, becomes the focus for the Serrao-Orlov Corporation as the planet has a few secrets the corporation tenaciously wants to exploit.

Rosie, owner of Monk's Bar, in the corporate town of West Brynner, caters to wannabe criminals and rich Earther tourists, of a sort, at the front bar. However, exactly two types of people drank at Monk's back bar: members of a rather exclusive criminal class and those who seek to employ them.

Angel, ex-marine and head of a semi-organized band of beneficent criminals, wayward assassins, and washed-up mercenaries with a penchant for doing the honorable thing, is asked to perform a job for Rosie. What this job reveals will effect Persephone and put Angel and her squad up against an army. Despite the odds, they are rearing for a fight with the Serrao-Orlov Corporation. For Angel, she knows that once honor is lost, there is no regaining it. That doesn't mean she can't damned well try.

What listeners say about Persephone Station

It's got all the representation you crave without any of the calories. At risk of taking the food metaphors too far, too much toast for too little butter.

Maybe I'm not the target audience, maybe I didn't do a great job of paying attention, but I just wasn't ever that engaged. It all felt very loose. Plot points are brought up then forgotten, focus is shifted, characters are given depth but no filling. It might have made an excellent trilogy, but as a standalone book I feel kind of let down.

I think that part of it was the voice actor. She does reasonably good accents but only really has one voice, if you get my drift.

I know that all sounds super critical, but I want to emphasize, it's not bad, just also not that good. Give it a read, you might do a better job than me.

I've never had Hooters, and I can tell you that the food is bad. How is that because they have to sell you their food with sex. Persephone Station is the food and The Mandalorian and Cowboy Bebop would be the sex. Now this book would be good if they didn't prop it up next to those 2 stories. So as you go through this book you can't help to compare the 3. It's vaguely like those 2, not enough to make you care about the characters or the stakes they are in.

Apart from the ending feeling rushed, I really enjoyed this sci-fi take on a small band of warriors defending a village against the might of a corporation. I hope we see the characters (especially the embodied AI) in future stories set in this world.

Narration was good, although no fault of the narrator, the ‘he said she said’ parts of the text were sometimes tedious to hear.