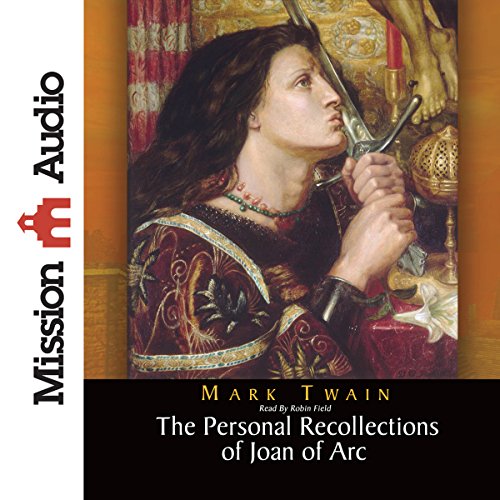 Personal Recollections of Joan of Arc

Regarded by many as the most luminous example of Twain's work, this historical novel chronicles the French heroine's life, as purportedly told by her longtime friend--Sieur Louis de Conte. A panorama of stirring scenes recount Joan's childhood in Domremy, the story of her voices, the fight for Orleans, the splendid march to Rheims, and much more. An amazing record that disclosed Twain's unrestrained admiration for Joan's nobility of character, the book is matchless in its workmanship--one of Twain's lesser-known novels that will charm and delightfully surprise his admirers and devotees.

Underrated novel, well worth a listen

How amazing to think of Mark Twain, arch-skeptic and misanthrope, being so taken with the Maid of Orleans. He plays this one straight: there is occasional humor, mostly centered around village life in Donremy or the childhood companions of Joan who join her later as part of her "staff." But Joan herself is taken exactly as she presented herself and as she apparently thought of herself - certainly as many people thought of her in her lifetime: a deeply religious, courageous, and patriotic young woman who wrought a military miracle. There is not the slightest trace of irony in Twain's portrait of her. (If you want a contrast, read Shakespeare's "Henry VI Part One," where Joan figures as a witch, a sadist, and a trull.)

Much of what he says in the book (where he credits himself somewhat archly as a "translator" of the memoirs of one of Joan's aides) is taken, Twain assures us, directly from the historical record. Joan is unique in medieval history in having testimony preserved that was given in two ecclesiastical proceedings: one that condemned her to death, one that posthumously found her innocent. Her own words, her own brilliant responses to many of the questions put to her by inquisitors, are there in the record. So is testimony from people who knew her as a child and as a young woman, as a peasant girl and a warrior. I've read some discussions of the book that suggest Joan was modeled on Twain's daughter Suzy, who died the year the book was published. Maybe so; but if Joan's dialogue in the trial scene is really taken straight from the record, there doesn't seem to be much Twain needed to add.

I'd avoided this novel for a long time, and only read it recently because I'm trying to work my way through all of Twain. I wish I'd done it sooner. It's not his greatest novel, but it's a good one, much better than I'd been led to expect by the many dismissive comments about it I've read over the years. Joan herself is a charming and tragic (and totally credible) figure throughout the book, and the story of her military campaigns and the trial that ended her life are given in richly anchored historical detail. I've since started reading some of the many nonfiction books about Joan: I think I've been bitten.

Robin Field's narration is excellent. He's one of several first-rate narrators of Twain (others include Grover Gardner, Bronson Pinchot, Richard Henzel, and Patrick Fraley). He provides a slight French accent for the novel's narrator, which I don't think was necessary but didn't mind. After Joan's death, I found myself in a somber, thoughtful mood for several hours.

Mark Twain had a fascination with Joan of Arc and said this was the best novel he ever wrote. Sharing in Twain's fascination, I have to agree with him. You won't find much of Twain's familiar humor, but you will find faith, patriotism, and heroism on a scale that can't help but inspire. Regardless of your own personal views of Joan of Arc, Twain's writing will either make you believe or at least allow you to suspend your disbelief. It's a well-researched story, and some of his conclusions, while controversial in his day, have turned out to be more true than he knew. I would rank this right up there with Margaret George's The Autobiography of Henry VIII.

The narrator takes a little getting used to. It's clearly a badly faked French accent for the character telling the story, and the feminine version he uses for Joan is even worse. It's almost something out of Monty Python. That said, Robin Field does play it straight, and once you get used to the vocals, the power of the story will pull you in. We all know how it ends, but if you're not moved by how well it's told, you have a hard heart indeed.

Good, if you love Twain and Joan

This is not at all a bad novel, but it is far from my favorite Twain for a number of reasons. Firstly it is a long and quite well known story with many details but limited moving insights. Most of Twain’s work, both the serious and humorous, have insights and perspectives that add great power to the writing. Perhaps, at the time of writing Joan of Arc the insights and perspectives presented may have been fresh and unique, but since then, these concepts have been so deeply associated with Joan of Arc as to seem passe. There is also less of Twain’s humor then he usually works into even his most serious of writings. The characterizations (at which Twain usually excels) are, necessarily, somewhat constrained. The narration is not bad, but is a little stilted.

All that said, this is still a pretty good listen. I enjoyed some aspects of the book quite a lot. I would not recommend this to everyone, but if you are a fan of Twain or Joan (as I am of both) it is well worth the time.

I literally could not stop listening to this. The story you know the ending to from the beginning, but somehow have hope for her from her dismal end. The story's performance is captivating, I was there right along with her clerks... Definate re-read....(Listen)...

I loved the narration. I saw in the reviews there was some comments about that. His character voices were fine. The story is so compelling and well written (Mark Twain, duh) that the narration is secondary. I wept. It was inspiring.