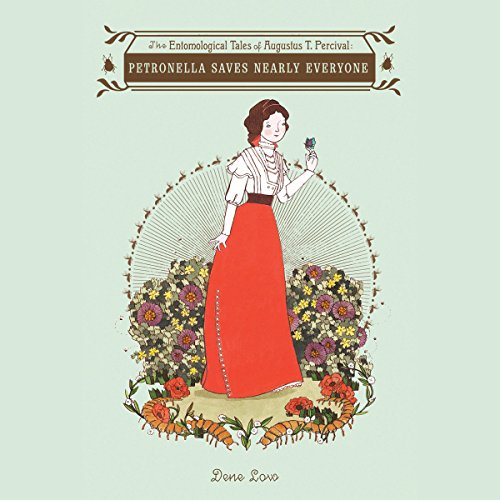 You would think Petronellas 16th birthday would be cause for celebration. After all, fashionable friends are arriving at her country estate near London, teas are being served, and her coming out party promises to be a resplendent affair. Everything is falling nicely into place, until, suddenly, it isnt. For Petronella discovers that her guardian, Uncle Augustus T. Percival, has developed a most unVictorian compulsion: He must eat bugs. Worse still, because he is her guardian, Uncle Augustus is to attend her soiree and his current state will most definitely be an embarrassment.

During the festivities, when Petronella would much rather be sharing pleasantries with handsome Lord James Sinclair (swoon), important guests are disappearing, kidnapping notes are appearing, many of the clues are insects, and Uncle Augustus is surreptitiously devouring evidence. Its more than one 16-year-old girl should have to deal with. But, truth be told, there is far more yet to come.

What listeners say about Petronella Saves Nearly Everyone

This is for everyone who loves intelligent, witty stories with plenty of fun adventuring - and bug-eating (extremely funny). It is read VERY well by Emily Janice Card. All of the extremely varied characters are distinctly drawn by her voice. This is not fot small children, as the vocabulary isn't simple, but it could be great for children from 11 to 111. (This reviewer is in her mid-forties.)

I LOVED THIS BOOK - and I hope to see more from Dene Low.

Reading another’s enthusiastic review I downloaded without hesitation. An entertaining book, a bit of a romp through late Victorian London - think Sherlock Holmes and Austen, mixed with some the light humour of a lighter Georgette Heyer comedy of manners novel.

Petronella has to confirm to social propriety at the same time being embroiled in a situation that needs pluck, resolution, and night-time assignations at Trafalgar Square. The cast of eccentric family and doltish police is written with very broad strokes. Very silly and enjoyable.

The narrator is not British (I thought initially this book had an East Coast setting), and unfortunately does not know the pronunciation of some words and places (“Savoy” particularly grated); although she did narrate with great verve.